Would They Rather A Matriarchy? 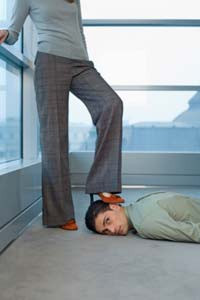 The recently concluded 2018 political season has with justification been labeled “the year of the woman”.  True enough, a remarkable number of women have been elected to public office.  This has encouraged the feminist left to be more open and vocal in their desire to end the patriarchal system.

It is clear that men, particularly white men, have dominated the political landscape forever.  It is equally clear that the feminist left would like to erect a matriarchy in its place.   The question that arises, is whether a matriarchy would be any better or more civilized.

Clearly the left thinks so. Even the Washington Post stumps for a matriarchal rearrangement in American political life.  Well, we do have some examples from history of women who have risen to the top. The results are not encouraging: Elizabeth I, Catherine the Great, Indira Gandhi, Golda Meir, and Margaret Thatcher to name a few.  To a one these women were tyrants and war mongers, using the political power they obtained to kill and steal, just as effectively as men.

Now feminists would argue that these were not really feminists.  That if we truly got feminists into power things would be different. The Nation magazine makes this explicit argument regarding a feminist foreign policy, arguing in fact that nothing less than the fate of the Earth depends upon women holding political power.

There are serious reasons to doubt all of this.  First, the notion that different groups think differently has been around since at least Karl Marx.  This is the crux of his “class consciousness” idea that will lead to the rise of a revolution lead by those who think differently.  This is known as “polylogism” or multiple logical structures to the human brain.  This is a term attributed to the great economist Ludwig von Mises.  Mises then went on to destroy this notion as nonsense. Without going into excessive detail, one only needs to ask how would one explain these multiple logical structures of the human brain except by the use of the logic that is common to all humans? For a fuller treatment see here.  Over the course of time leftists began to substitute other groups in place of economic class; race and gender being the main ones.  The nonsensical nature of this remains, however.  Yes, there are differences between men and women but not in the logical structure of their brains.  Unwittingly, the left falls into the same patterns of thought that reactionaries use when “explaining” why women can’t be doctors or scientists, etc.

Second, in order for women to climb the political ladder they are subject to the same organizational dynamics as men.  That is to say the same skill sets that reward men with political power are needed for women to obtain political power.  Hayek pointed this out so well in his classic The Road to Serfdom. Political power, Hayek argues, rewards all the worst sorts of skills humans’ have.  To reach the top requires the deployment of these nefarious skills and all but dooms the project as being immoral. We all know examples of those we thought were different but, in the end, acted exactly the same as everyone else. The reason is that even if they start out with better intentions, the system rewards those willing to compromise their principles, so that by the time they achieve power they themselves are completely and irrevocably compromised.  Those who are truly different never achieve anything close to power.  These reasons make the examples above of female leaders, not anomalies but exactly the kind of leaders we should expect to see, male or female.

The underlying fallacy that all of these, admittedly well-intentioned groups employ is they think a civilized result can come about from an uncivilized enterprise.  Politics is about the acquisition, use and maintenance of power.  The power to control, the power to steal and the power to kill.  You do not enter into such an enterprise unless these are the things you want to do.  As I have often repeated the issue is not the wielders of the power, the issue is the power itself.  As long as the power exists then the problems will exist.

The Nation article cited above is highlighting groups, female led, that want a very different kind of policy than the current one.  They are largely part of the peace movement. There is nothing particularly gender specific about this movement.  Many women and men of good conscious make up this movement.  The sad fact is though, that this movement will fail as long as there exists this irresponsible grant of such destructive power to a fallen humanity.  This makes leftist peaceniks particularly ineffective as they want a strong domestic government, as if governmental power can be contained.  A better approach to the peace movement can be found here.

However, the only real way out of this morass is to dramatically reduce and decentralize governmental power itself.  Only by removing from people the power to control others, steal from others and kill others can we hope to further civilization.  This happens to be the only path that is truly consistent with the Gospel and the only path that will produce material benefits for the mass of humanity.  Only in a world of vastly limited (or dare I hope no) government can we all be truly equal; genders, races, etc.  As one of my favorite anarchists, Lysander Spooner argued: women have the same right to govern as men, that is to say they have no such right at all.   Do not be drawn into the petty political squabbles that ask you to choose between rival thuggish gangs.  Reject all of this in the name of the one who died for us; Jesus the Christ.