Woodstock Did Define A Generation 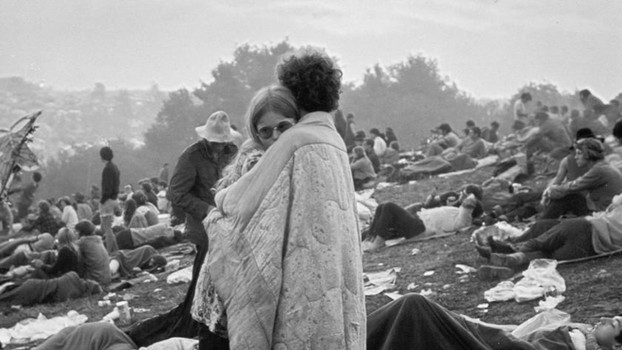 This past week saw the 50th. Anniversary of the Woodstock music festival.  It is an overused cliché to say this or that event defined a generation but, in this instance, I think it is warranted.  Unfortunately for Boomers this does not bring upon them any credit.  A recent PBS documentary brought into sharp relief what a disaster the concert was and how it almost become tragic.

The documentary outlines all the ways this event was destined to fail.  Before the event started the organizers knew that they did not have the resources to build a fence and therefore to charge people to attend; thus, guaranteeing a financial loss.  They knew in advance they did not have enough lavatory facilities to accommodate the expected crown, much less the crowd that actually showed up.  They engaged in a similar amount of half-assed planning for food, security, shelter and…well, everything else.  As the documentary establishes, they were seriously lucky no one was electrocuted at this event.  This article well outlines the true story behind the scenes.

In the end disaster was averted by actual adults coming to the rescue.  The military used helicopters to bring in food and medical supplies; local townspeople pitched in food and supplies of their own and as the documentary makes clear the attendees just took it all for granted that mom and dad would bail them out.  As PJ. O’Rourke said upon the 20th. anniversary: 400,000 nitwits sideways on drugs sitting in the rain and mud having food brought in by grown-ups is a good definition of this generation.  Should we really be surprised.  This was easily the most cosseted generation in human history.  They benefited from an unprecedented level of prosperity during the post war years and were blessed with parents that, having experienced the Depression and World War, wanted to provide them with a life they never had.  It was a “no problem” generation; food, clothing, shelter, no problem. Education, no problem.  Jobs, no problem.  Everything handed to them without apparent effort, or so it seemed to these people.

Now, it is an oversimplification to paint this broad a brush.  Woodstock, however, was populated with upper class, white people (who else could just drop everything, including acid, for three days in August), who led an amazingly privileged life.  Yes, the country had a lot more people who struggled and had to work hard for what they had but they were not at Woodstock.  Further, this upper crust elite are the ones who stepped into the power positions in U.S. society, so what they thought and did had an enormous impact upon U.S. society.

The best way to view what they valued is to look at what they did.  It’s not a pretty picture.  This self-indulgent generation took over and directed the U.S. society, already headed in a bad direction, and accelerated these trends headlong toward the abyss that we are now so near.  The first thing they did as a voting bloc was give us Ronald Reagan.  You remember, the guy who was going to slice government down to size but ended up increasing its power and scope, especially the military. Then by the 1990s, when they actually gained power themselves, they gave us Bill Clinton, George Bush, et al. and the continuing growth of government into more and more areas of our life and society.  Don’t listen to modern day leftists that call all of this “neoliberalism” (whatever the hell that means).  From the 1980s on government grew and grew.  Take jobs for instance.  In the 1950s just 5% of professions had a government licensing requirement.  Today it is over 30%.  The Federal Register is now 74,000 pages of picayune regulations, covering everything from industrial workplaces to what kind of light bulbs you can use.  At the local level, try building homes or apartments in places like New York, Los Angeles or San Francisco, what with all the development restrictions.  Government at all levels expropriates over 50% of the national income, roughly double what it was before the Boomers got hold of power.  This is without mentioning that they insist on taking the entitlement systems of Social Security and Medicare over the cliff in a final spasm of hideous selfishness.

All of these policies are beggar thy neighbor policies that served to entrench the Boomers’ position in the economy and pull up the drawbridge after them.  They had the good life, screw anyone else who might want a good life too.  They ossified the economy, put the Federal Reserve on steroids to line their pockets, and regulated everything to make sure they did not have to compete to keep their lifestyle.  This is true, even though we are in the midst of a final upsurge of an economy addicted to artificially low interest rates that is not sustainable.  Mom & Dad feeding them at Woodstock turned into Uncle Sam handing them a lifestyle they absolutely did not earn.  All of this has served to screw the younger generation, particularly the Millennials.  Let’s hope they get woke to what really has been going on.  The Boomers mantra went from “don’t trust anyone over thirty” to screw everyone under 30.  So much for peace love and understanding.

I know, you’re thinking that they did end the Vietnam War.  Well, more precisely they ended the draft.  Inflation and an exhausted Congress actually ended the war.  Later on, it is not as if they implemented a principled non-interventionist foreign policy.  In fact, they took a golden moment, the end of the Cold War and pissed it away in a fit of government sponsored foreign intervention.  Say one thing for this bunch, their faith in the efficacy of using someone else’s resources is boundless. The first Gulf War, Bosnia, Afghanistan and the Second Gulf War, all done on their watch and with their support, are a testament to this misplaced faith.   It is notable that the second Gulf War had the support of maybe the most famous Boomer war protestor of all; John Kerry.  When it was his turn to prevent the last man from dying for a mistake, he went morally AWOL.  Hippie dreams die hard, eh John.

As with all generations the Boomers are not without success stories.  They gave us the computer revolution, an amazing internet and some truly interesting cultural content.  They like all generations, are a mixed bag as individuals are themselves a mixed bag. However, on the whole this generation had everything handed to them, seemingly without effort and I think because of that never learned that work is AlWAYS needed to maintain and further prosperity. The inward gazing self-absorption that marked those who created the ME decade of the 70s has forever marked and marred the legacy of this baleful generation.  So, in the end the lack of planning and the need for adult intervention at Woodstock was the perfect example of what this generation was all about.

Maybe this is how it has to be.  Maybe the sense of entitlement and the hubris which follows has to crash upon the shoals of economic and social reality.  It may be that as fallen creatures we are doomed to cycles of achievement followed by decadence and dissolute living, hopefully then followed by rebirth and regeneration.  Let us pray for and work toward a rebirth that minimizes the heavy costs that these hippie ne’er do wells have laid upon our young.