What Kind of Savior Is He Anyway? 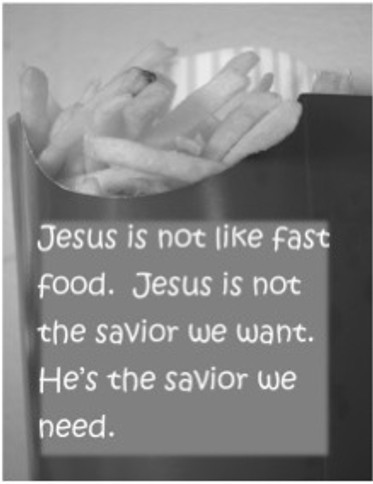 So, this week’s Gospel text (Matt 11:M2-11), finds John the Baptist in jail and asking questions of Jesus via His disciples.  He pointedly asks, “are you the one who is to come, or are we to wait for another?”.  It appears that John is not sure.  In last week’s text (Matt 3:1-12), John portrays the coming Messiah as one who’s winnowing fork is in his hand”.  While, as I suggested last week, this does point out the risks of not having a relationship with God (as a lack of such a relationship would be Hell for us as believers), it seems as if John thinks that earthly Jesus is supposed to be pitchfork Jesus.

This should not surprise anyone.  Most back in those times thought that the Messiah would be a military leader, ala King David.  They were convinced that the Messiah would lead the nation Israel back to its former imperial glory as had existed under David and Solomon.  The overthrow of the hated Romans was certainly a hope that many in this time kept close to their hearts.  It is what many expect and hope for in the Second Coming.  They want Jesus to come back as a cosmic Charles Bronson and kick some serious heathen ass!

This, however, is not the response that John gets.  Jesus sends his disciples back with the instruction to tell John what they have seen and heard Him doing.  They have seen the blind receiving their sight, they have witnessed the lame walking and the lepers cleansed and the deaf made to hear.  They have seen the dead raised and the poor being brought good news.  In short, this is nothing at all like John or anyone else expected.

Jesus exposes the extraordinarily radical nature of His ministry and the call He makes for us to follow Him down this path.  We are, as Jesus Himself does, to reach out to care for all of those whom society has discarded as “unworthy”.  We are to especially care for the outcast, the downtrodden, the oppressed, those afflicted with mental and physical challenges.  In short, we are to minister to the outsider, the stranger among us; in today’s parlance, the immigrant, the asylee and the refugee.  To top it all off we are to bless those who take no offense at Jesus, without regard to arcane, picayune theological differences.  This is a call that Jesus makes that is contrary to many of the expectations people have about the Messiah, then and now.

The other notable point Jesus makes in this text is the explicit rejection of earthly power and power systems.  He asks (verses 7 & 8)” What did you go out into the wilderness to look at? A reed shaken by the wind? What then did you go out to see? Someone dressed in soft robes? Look, those who wear soft robes are in royal palaces.”  The reed reference is to Herod, who often used a reed as a symbol and the soft robes in royal palaces is a clear enough reference.  Jesus rejects these as a part of His ministry and corrects anyone thinking that they will find these things when they find Jesus.  This is one of many, many times that Jesus rejects earthly power as appropriate for His ministry.  It becomes inappropriate for us by extension as followers of Jesus.  If we are to emulate Jesus, then we must move past the sterile and ultimately counter-productive idea that politics and power offer a solution to the world’s problems or that these things have anything to do with God’s call on our lives.

In the end, Jesus does something else remarkable in this text.  He clearly looks past John’s mistake about the nature of His ministry and the nature of the salvation the Jesus is offering.  He affirms John’s place as a prophet (verse 9) “Yes, I tell you, and more than a prophet.”  He labels John as perhaps the greatest of the prophets.  Even in the process of correcting John (and by extension us), Jesus reinforces that we are worthy to carry forth His message of eternal salvation via Jesus to our Father in Heaven.  We just need to be clear about what that message actually is.  It is a good deal more radical than most think or would be comfortable with.  Yet, there it is, radicality and all.  We are to serve those most in need of help as a reflection of who we have become as followers of Jesus and reject the power structures of this world that have done so much to oppress so many.  Jesus leaves us with the clear teaching that as great a prophet as John may be (and any of us for that matter), “yet the least in the kingdom of heaven is greater than he.” (verse 11).  Always greater are those whom we serve!

As is always the case, we (and John) don’t get the savior we expect, but we always get the savior we need.  Jesus has made clear what kind of savior He is and whom we are to serve in His name.  The only question for any of us is “how shall we answer?”