What Jesus Did Not Do 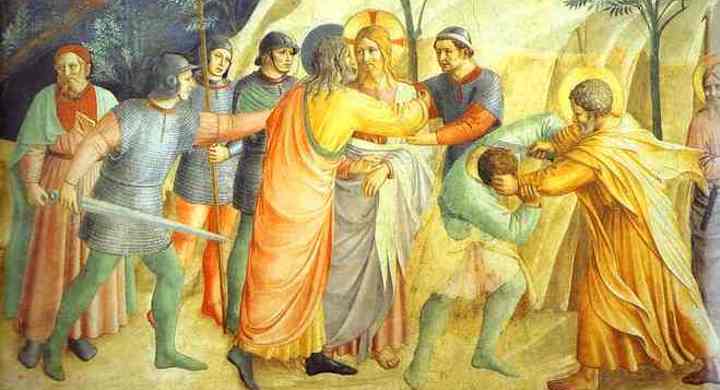 We have seen what it was that Jesus did do to begin to pattern our lives after Him. I think it is just as important to look at what Jesus did not do, in order to more fully discover His plan for our earthly lives.

The first thing to understand is that Jesus never harmed anyone. He never acted in violence toward anyone, nor did He ever advocate or sanction violence to ever be used. I would challenge anyone to point to a passage in Scripture whereby Jesus ever gives sanction to the use of violence. It cannot be done, because He never did so. Jesus was a complete man of peace, even unto death on the Cross.

One key passage that illustrates this facet of Jesus is Luke 22:47-53 where Jesus is being arrested in the garden and one of the disciples asks if they should strike with the sword and then proceeds to cut off the ear of one of the guards. Jesus rebukes him saying “no more of this” and proceeds to make the guard whole again. This is the most visible passage detailing the nonviolent nature of Jesus, as it deals directly with physical violence and armed conflict. However, Jesus makes it even clearer (John 18:36) that He could call forth a physical rebellion if He so chose but that His kingdom was not of this world and is not about that sort of action.

There is, however, a larger thrust to the nonviolence of Jesus. It is not simply about being against violent acts of swordsmanship or physical rebellion against the empire. Jesus is not simply specifically opposed to this type of action and never gives violence of this nature sanction or support. More broadly speaking Jesus is against all manner of coercion regarding the free choices’ humans make. Coercion is defined in the dictionary as “the practice of persuading someone to do something by using force or threats”. That is, it is the practice of forcing people to do what they do not wish to do or preventing them from doing what they would otherwise do.

This attitude of eschewing coercive measures is certainly consistent with the way God always treated His children. God never coerced Adam, nor Moses nor any of the nation Israel. There were certainly consequences, both eternal and earthly for aberrant behavior but God always let people choose their own course of action. God even let Mary accept the blessing God bestowed upon her with the Immaculate Conception. So, Jesus is following a well-worn tradition by embracing this perspective.

Beyond this perspective, however, there are several passages in the New Testament where Jesus could have chosen to use coercion and violence to get others to follow Him or obey His commandments but chose not to. In fact, on some of these occasions He was asked to do just that but flatly refused. One such occasion is Luke 18: 18-30, which is the story of the rich ruler. In this story the rich man asks Jesus what he must do to be saved. Jesus informs him to follow the law, which the man says he has done his whole life. Jesus then tells him to sell all his possessions and to follow Him. This represents a call for faith in Jesus to give up everything of this world and follow Jesus as Messiah. The man leaves saddened because he is very rich. This goes to show how difficult it is for any of us to truly believe strongly enough to let go of what we cannot keep but instead grasp hold of that which we cannot lose. However, the point here is what Jesus did not do. He did not chase after the man. He did not browbeat him or threaten to impose a wealth tax on the man. He did not call upon the authorities to punish the man for not parting with his property. Jesus simply notes how difficult it is for a rich man to enter the Kingdom and then He moves on. There is a call, nothing more. The choice was with the rich man, as it is for all of us.

The next instructive passage is Luke 9: 51-56 when Jesus and the Disciples are on the way to Jerusalem and a village of Samaritans (always hostility between them and the Jews) refuse to welcome them. When this happens James and John ask Jesus if He should “want us to command fire to come down from heaven and consume them”. Jesus instantly turns and rebukes them. Jesus understands and accepts that none of us, even the Messiah, have an earthly right to be accepted and welcomed. While being welcomed is of course a good thing, Jesus flatly refuses to draw a bead and punish anyone for refusing to do so. Nonviolent persuasion, not force is always the ammunition used by our Lord.

The live and let live outlook of Jesus even extends to those who perform ministry in Jesus’ name but who are not explicitly following Him, as we see in Mark 9: 38-41, when the gang runs into a group of people doing just that. Jesus not only refuses to punish them but refuses to even criticize them but rather praises them. We should all be so nondenominational!

The final passage I wish to bring up is for me the Granddaddy of them all as regards Jesus’ views toward political coercion and violence. Matthew 4:1-11 show us a Jesus tempted by Satan in a variety of ways. Most importantly for purposes here is the offer to Jesus of all the kingdoms of the world if only Jesus will bow down to Satan. Of course, our Lord rejects the offer with the clear-cut answer that we are to worship the Lord your God and serve only him. This bears repeating, we are to serve ONLY God. This is an explicit rejection of politics as a part of the mind of the faithful. As I discussed earlier Jesus could not be clearer that politics is not only anathema to His Kingdom, but it is positively irrelevant.

These passages are but a sampling of the attitude that Jesus gives toward the use of power. He is all about calling us to a relationship with God and a loving relationship with one another. He never even hints at the use of force or coercion to get people to get in line. He never advocated forcing people to help others, He simply calls us to do what a faithful people should do. It is critical that we understand this. As much as we want to get others to follow Jesus and do the right thing, we are never sanctioned by our Lord to coerce people into doing so. In any event each of us should pause before we give lectures or use force on others to do the right thing. As the book tells us take the log out of our own eye before we (nonviolently) take the speck out of our neighbor’s eye. Violence, even in the name a passionately held belief, is never right nor is it effective. As always if you want to change the world, start with the person in the mirror. If we do that, we can truly build a more peaceful and prosperous world in His name.