We Should Not Desire an Eternal Damnation 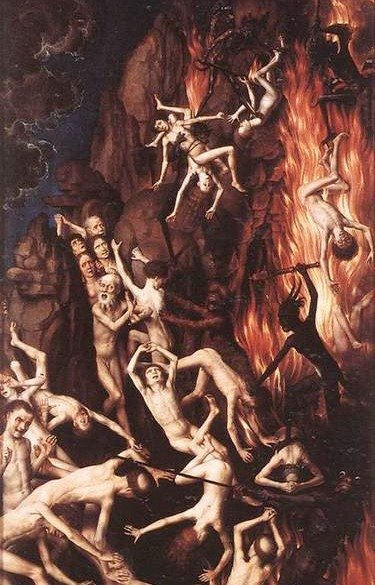 No, I don’t mean that people want eternal damnation for themselves, but for those they consider wicked. Last week I discussed whether God sends people to hell. In the end I do not think so as people have the freedom to choose to be in a relationship with God, or not. The notion that God does not eternally torture people who do not desire a relationship with Him, or who are so evil that they have broken all bonds with God, is one that gets a fair amount of pushback. Many Christians recoil at this notion as it does not fit their ideal of eternal justice. This is, I think an unhealthy attitude, as I will discuss shortly.

First, a small digression. Many point to a multitude of passages in which Jesus discusses eternal fire and what seems like eternal punishment. A good summary is here. What most commentators miss, I think, is that the flames are eternal not an individual’s place in those flames. There is no argument from me about the fact that God is eternally judging humanity. This is not at all the same thing as condemning people to eternal torture. Eternal punishment for Jesus was annihilation and separation from God, not eternal torture. None of the passages in the above link can be reasonably interpreted to mean this.

The other passage, I will mention briefly is Luke 16: 19-32. This is the parable of the rich man and Lazarus. In this parable the rich man is looking up from the flames of hell at the beggar Lazarus who is getting in eternity what he did not receive in his earthly life. Many point to this as proof that Jesus was indeed talking about eternal punishment not simply annihilation. The key word here is parable. The best interpretation is that this is a parable to drive home the point that we must concern ourselves here and now with those least among us. Even Luther taught that it was a parable about rich and poor, not to be taken literally.

This digression points out that serious scholars exist on both sides of this debate, however, I clearly come down on the side of eternal non-existence as hell rather than eternal torture, as having the stronger Scriptural support. What is most bothersome, however, is the desire of so many to want there to be eternal torture. Set aside the fact that it is likely not as strong a case as that for eternal non-existence, it is an unhappy desire for a couple of other reasons.

First, it is specious theology for the fact that it presumes to know the mind of God. In some extreme cases there are those that presume to be able to manipulate the mind of God to attain a particular outcome. This conflates man with God and is the original sin. We are to have no other Gods before us, not even our own fetid desire for retribution. All of this is God’s business, and He is quite clear that if there is to be vengeance it belongs to God not us, as is pointed out here and here in Scripture. It is always consistent with following God, especially through His son Jesus, to let God be God and us to do God’s will, not ordain that will.

Second, it is a deleterious thought process because, why would anyone want eternal torture inflicted upon anyone else? It is simply not healthy to live life with a deep desire to see others suffer, even if we think they are evil. In the first place, we don’t know just exactly what evil is in people’s heart (see above about God’s business). Also, we are told repeatedly by Jesus to concern ourselves with our own sin and not the sins of others. It is enough of a task to pull the log out of our own eye without bothering about the speck in someone else’s eye.

If we go down this path, we end up a seething mass of hatred and animosity, seeking revenge not restoration. It is a short trip from this thought process to executing “justice” against our neighbors that makes us act in the very ways we claim to oppose. History is littered with those who, so sure of themselves, went marauding against all manner of those they considered evil and ended up committing some of humanity’s worst atrocities. See the Jacobins of the French Revolution or the various drumhead trials that have cropped up in the bloody history of humanity.

Ours is to follow the path of Jesus, who offered mercy not judgement to humanity. Restoration, not revenge is God’s way. This does not mean that we can’t keep dangerous people off the streets (it does mean we can’t execute them, though). Keeping the streets safe is a far cry from seeking the eternal torture of those we think are evil and worse, hastening their trip to the eternal furnace by executing earthly violence. We must always seek a place of peace and mercy or we risk caving into our worst animal instincts.

In the end we are all rather hypocritical. We seek justice for others and mercy for ourselves. The reality of this universe is that we are all worthy of God’s harsh justice. Yet the incredibly Good News is that instead of this harsh justice, God offers us His mercy instead. As Jesus taught us; forgive others as we have been forgiven. Leave the rest to God.