Time To Cage The Dogs Of War 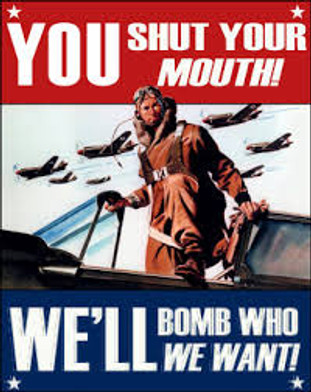 The recent U.S. strike upon Syria is a distressing reminder that the warfare state grinds on in all its bloody ugliness.  It is clear that all civilized people must reject this wanton use of violence.  Even by the heathen just war criteria this action fails to pass muster.

Under this standard any nation may use defensive force to defend its territorial integrity, its sovereignty and its transit in international waters.  Any defense of these things must be proportional to the threat involved and not target non-combatants.

Clearly this actions fails this test egregiously.  Syria is clearly not a threat to any of these.  Further the action, in spite of what the government will tell you, clearly inflicted avoidable damage upon innocents.  The justification given by the government is that national interests (insert imperial for national) were threatened.  This by definition fails the just war test.  This becomes then a war of aggression for reasons not relating to those few things a nation may rightfully defend.  The resulting deaths, combatants and non-combatants alike become war crimes and blood upon the U.S. government.

By the way, this action is also clearly unconstitutional.  The standard defense of such executive action is that it is allowed under Article II, Section 2 which gives the President control of the armed forces.  This ignores the fact that the constitution give Congress the authority to declare war. The way this legal thinking has evolved the President may call into action the armed forces in the event of an imminent attack upon the country.  This is clearly not the case as again, Syria poses no threat to the U.S.

This is reason enough for civilized people to condemn this type of action.  In fact, nearly all government military action is illegitimate as it fails both the just cause standard as well as the proportionality and non-combatant death standards.

Should we as Christians leave it at that?  By no means. Why should we accept the heathen just war standard when this is clearly at odds with the Gospel.  There is nothing in the life or teaching of Jesus that would support the acceptable use of ANY type of violence.  Nor is there anything in the life or teaching of the Apostles which would support this.  There is nothing in the New Testament at all which would provide support for anything but a stance of complete non-violence.  I go into more depth here.

Most will claim that this stance will lead to practical disaster.  I have dealt with the practicality of peace previously. Many of those voices will be fellow Christians., which should not ever preclude a conversation with them.  There will also arise a claim that this is bad theology.  The soundness of the theology can be found here and here.   I would suggest that if we examine our hearts we know what Jesus would have us do because we know what Jesus Himself did; go to His death rather than raise a hand in violence.

Most Christians will fall back on one of two escape paths to lead them away from this difficult position. They may claim that Jesus’ ethic is for some far-off time in the future, presumably after the Second Coming.  This fails upon the truth that everytime Jesus calls someone to follow Him, that call is immediate.  Even the man who wanted to bury his father was told to follow now.  Time and time again the claim Jesus puts upon us is to follow Him right now, not at some distant point in the future.  So the notion that we should follow some interim ethic while waiting until later to fully follow Jesus is weak sauce indeed.

The next fallback position for those denying the need to follow what Jesus does is to claim that what Jesus offers us is an unreachable ideal that is not really intended for use in this life. We are free then to follow some lesser standard that Jesus would have us apply to human life.  This is remarkably weak, far weaker in fact than the notion of an interim ethic.  To claim that Jesus does not desire the in-breaking of His Kingdom into this world is belied by His entire life and teaching. We need only to look at the Lord’s Prayer to see the emptiness of this claim: “thy will be done on Earth as it is in Heaven”.  Of course we are to engage in Kingdom living here in this world.

Now I know that we will fall short of the ideal that Jesus sets before us, but to fail to embrace that goal as a real life, right now, this world standard is to fail to live out our Gospel call before we have even begun.  Additionally to deny that this is the standard for us as faithful is to suggest that God gives us a call that we cannot answer.

What then is to be our response?  I would suggest that at a minimum we are to clearly speak out against such military action. The Christian community must be clear in condemning all forms of violence from whatever source.  We will be accused, of course of being “unpatriotic”. Suffer this charge then, we answer to a higher power.  We will be accused of allowing the destruction of the free world (as if the U.S. empire extends freedom).  Ignore this charge as well, we know that true freedom is only found in following our Lord and Savior.  We may lose friendships and relationships because of our stance.  So be it, those whom God puts in our life that truly love us will be with us all the way.

Whether or not to engage in more active forms of civil disobedience is not a decision that anyone can make for your life but you. Jesus calls us to different forms of action based upon the gifts God has given each of us.  I can only clearly state that whatever action you take must be non-violent and done with love for all, even our enemies.  If we begin to state our case more clearly and act, vote, etc. accordingly then we CAN make a difference.  If we change the culture of imperial violence then the political culture will change accordingly.  This change in culture starts with a change in conversation.  Do not let anyone tell you that any perspective is off limits or that now is not the time.  The time for Kingdom Living is always now and peace is always possible, if only we trust God enough to follow the path laid out for us by His Son.