They Were Not Chosen For This 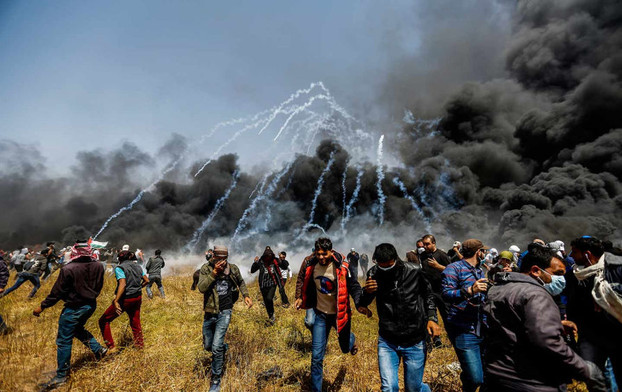 This past week saw a horrendous situation unfold in the Middle East as the Israeli military shot and killed at least 50 Palestinians and injured scores more as riots erupted in the wake of the thoroughly unnecessary movement of the U.S. embassy from Tel Aviv to Jerusalem.  In evaluating this situation one is immediately tasked with apportioning blame. Only in so doing can we formulate a appropriate response both morally and practically.

Obviously as Christians we are horrified at any loss of life as acts of violence are proscribed to the Christian conscience.  Nonetheless we must look clear-eyed at this tragedy to determine its cause.

First let’s state that neither side is pure.  Like all of humanity people on both sides are a mixed bag.  Further let me grant that the Palestinians, both Hamas and the Palestinian Authority are authoritarians.  The image they possess for society is a theocratic one complete with really bad economic ideas.  Were they to get into actual power I have no doubt they would continue and perhaps exacerbate the poverty of their people.  Many on the Palestinian side are flat out bad actors.  There is truly serious doubt whether they would accept the existence of Israel at all.

Let me further state that Israel is an actual functioning democracy (for what that’s worth), it is, mostly respectful of its (Jewish) citizens human rights and its economy performs pretty well as it is more free market than not.

All that being said we must apportion the lion’s share of the blame onto the Israelis.  Why?  Because they possess almost all of the power.  To those that hold the power the moral accountability lies.  Where did Israel derive most of this power?  From the U.S. taxpayer of course via the thieving U.S. government.  This places a great deal of the moral burden on this nation as well.  The United States has armed Israel to the teeth with the most sophisticated military materiel in the world.  Israel is an armed camp with a greatly militarized society. This state of affairs exists out of all proportion to what Israel could have afforded on her own.  This military capacity is also way beyond what Israel needs to simply defend its existence.

So what has Israel done with all of this military power?  Like all governments-nothing good.  To begin with they displaced over 700,000 Palestinians in 1948 at the creation of the Jewish State of Israel.  These people were driven from their homes and subjected to what can only be described as an ethnic cleansing.  Those Arabs that remained have been second-class citizens ever since.

Since 1967 in the wake of a war blamed on the Arabs but actually started by the Israelis, the Palestinians of the West Bank and Gaza Strip have lived under Israeli military occupation.  They exist under the arbitrary authority of the Israeli military.  The situation has only gotten worse since then.  For the last 12 years Gaza has been blockaded, creating an economic and human rights disaster. On top of that they have been subjected to military repression and intermittent bombings.

In the West Bank the Israelis have been systematically erasing the previous border with their settlements that are, of course, Jewish only.  This policy has built literal walls that cut off Palestinian homes from their farms and workplaces.  It is clear that the Israeli government has no intention of allowing a Palestinian state to emerge or to address the legitimate grievances of the Palestinians who had their land stolen.

All of this is made possible by the blank check provided by the United States.  We have never been an impartial arbiter in these events but rather the guarantor of Israel’s intransigence.  There has never been a reason for Israel to engage in the peace process in good faith as the U.S. will back them no matter what.  This has resulted in a hardening of the Palestinians into a role as armed insurgents as that is the only role left to them by their occupiers.  Again, it is not to deny the abuses and war crimes of the Palestinians but to understand who bears the greater moral blame and why.  It is clearly Israel because they unrighteously wield the greater power given to them by their imperial overlord, the United States.  In the process they have created an apartheid state that rides roughshod over the rights and dignities of the Palestinian people.

The irony is that Israel will self-destruct as a single apartheid state.  It will implode morally and financially unless it makes a serious move to create a Palestinian state responsible for itself.  It seems clear enough that the best policy the U.S. can undertake is to cut Israel off from ALL aid (We should of course end all foreign aid to all nations as well.)  This will force Israel to the negotiating table and force an end to their morally and practically destructive path.  Whether or not Israel chooses peace is on them, their fate as a nation is not the concern of the U.S. government.

This policy would place us in a much better position morally and practically as well.  No longer will our relationships in the region be poisoned by our immoral, unstinting support of a rogue nation.  We can begin to act as a nation among nations seeking only peace and freedom rather than imperial hegemony.

As Christians our path should be clear as well.  We must oppose both the Israeli and U.S. policy of repression of the Palestinians. We must not be fooled by the specious theological claims of the fundamentalists promoting end-times nonsense. This is bad theology plain and simple.  We must oppose all forms of violence by all parties concerned. We must work for the peace and dignity of All God’s people; Jews, Christians and Muslims.

It is distressing to say the least to look at this situation as a people of faith.  The Jewish people were the first to hear God’s call and the first who were tasked with proclaiming God’s greatness.  We believe firmly that the Jewish people were indeed chosen.  However, it must be painfully clear that they were not chosen for this.