There Is No Secular 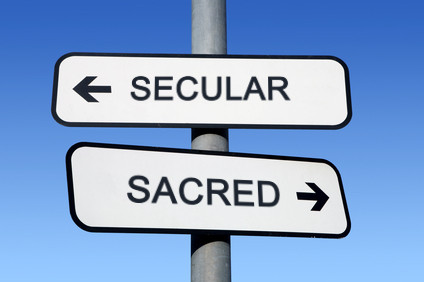 I was recently at a ministry program that I am involved in at my local church, the beginning of which involves music and prayer in the Sanctuary.  After the music and prayer, when the crowd moved into another room for the rest of the program, the guitarist/singer played the Eagles Song Take It Easy.  At this point a man, who was visiting began to harangue the guitar player.  “How dare he play secular music in God’s House”, “How dare he profane the Church with this secular music”.  He specifically mentioned the lyrics “I’ve got seven women on my mind four that want to own me, two that want to stone me…” (never mind that the stoning was of the biblical variety not the pot type) as offensive.  He was adamant that we had committed a great sacrilege against God by profaning Him in His Sanctuary.

At first I tried to steer the conversation to a “we can agree to disagree” place but he would have none of that.  Upon further reflection though I came to actively disagree with his entire approach to this subject.  So, wherever you are oh, angry man, thank you for making me reflect on this topic.

What I most object to is the attempt to compartmentalize God, as if HE is only in a Sanctuary of a local church.  Embedded in this notion is the idea that we better not profane Him there or we are in trouble.  But why would we want to profane God anywhere?  The entire universe is His sanctuary and belongs to Him, us included.  If something is profane it ought not to pass the lips of the faithful.  Not in a Sanctuary, not in a field, not on a mountain or at the bottom of the sea.  Not whether we are alone, gathered with 2 or 3, or amongst a great multitude.

The idea this man conveyed is that there is the secular and the Godly.  I think this to be nonsense.  There is only the Godly and the profane.  The faithful can admit of nothing secular for God has a claim on our entire life.  I would ask; please describe the secular part of Jesus’ life.  There of course, is none and therefore there must not be one for us.

This brings up the topic of what is a religious song?  Obviously, there are hymns we sing at worship service and other faith gatherings.  There is of course the music we play on the radio in our car, that is certainly not described as “religious”.  But is the line between the two that bright?  It was for this man, who I think, carried far too much certainty into the discussion.  I am not prepared to say that there is a bright line between the two types of music.

If a song or any other artistic expression, uplifts, brings joy, makes one think or feel, brings peace and fulfillment then it is of God.  If it tears down or is violent or damages the fabric of our humanity then it is profane.  Many songs that are considered secular are quite sublime and religious.  One example is John Prine’s amazing Hello In There.  This is a song about not forgetting people as they age and a deep plea to remember that human relationships are critical to our lives, that is completely Godly.  The world is filled with such examples.  On the other hand, there is the deeply blasphemous Battle Hymn of the Republic, held up as a religious masterpiece but really, an obscene cry for bloodthirsty war with God at the front of the army.  So, really which is Godly and which is profane?  Reasonable people can disagree about specific songs but the point is that the line is rarely clear and it need not be; the Godly uplifts, the profane tears down.  This is true of music, literature and every other area of our lives.

We can admit of no separation between what is of God and what is “secular”.  To do so risks being pious on Sunday and shit the next six days.  A “Sanctuary” is a place where we conveniently gather as a faith community to confess our adoration of God and His Risen Son, that is absolutely a good thing.  But it is not the only thing; ALL His Creation must be a Sanctuary for us.  All that we are and everything that we do should reflect that.  We are all one whole being in service to God.  Let’s leave all this talk of a Divine/Secular division to the heathens.