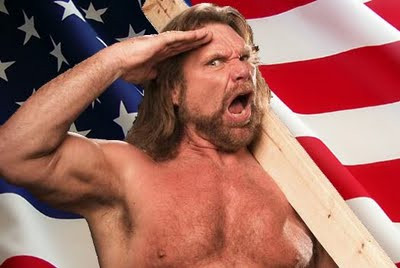 What is a Yahoo Military Goo Ga?  It’s a little like the Supreme Court’s definition of pornography; I can’t exactly define it, but I know it when I see it.  I would suggest that we all know the type.  It is the chanter of U-S-A, U-S-A at rallies and other such events.  It is the person who speaks with near reverential worship about the “sacrifice” of our military and how we are solely dependent upon them for our freedoms.  It is the person with a building sized U.S. flag flying from their (American made) pickup truck.  They permeate the ranks of NFL fans and get an adrenaline rush at military planes flying over stadiums.  The Urban Dictionary defines a goo ga as “overkill” or excessive. Overkill and excessive are perfect terms for this type of person.

Is there a concern with the culture and the attitudes that this person represents?  Well on a cultural level I would argue that it is boorish.  But boorishness is hardly a sin much less a crime. This attitude does, however, underlie much of what is wrong with U.S. culture.  It is this religious veneration and worship of all things military that allows for the perpetuation of atrocious and immoral U.S. imperial policy.

The foundations of this cultural pest are twofold.  First, there is no grounding in anything like a moral philosophy.  I don’t mean that everyone needs to sit and ponder the deep philosophical questions all the time (once in a while wouldn’t hurt, however). This mindset, however has given almost no thought whatsoever to any ethic of right and wrong.  They are of the mentality that we are always right, and “they” are always wrong; “they”, being defined as whomever is pissing us off at the moment.  It never, ever occurs to these people that others are entitled to the same rights and dignities we are, and that the U.S. is bound by the same moral rules as everyone else.  It simply does not register that this is the case.  It doesn’t take a philosophy professor to understand basic concepts of right and wrong and that we all share the same human rights.  This unthinking attitude leads to an acquiescence if not downright active support for a host of violent rights abusing policies. This person is given a thin veneer of intellectual respectability by the “intellectual” who pops up on cable television to voice support and offer all manner of contorted justifications of these policies.  However, these think tank miscreants would get no traction whatsoever were it not for the intellectual shallowness of the Yahoo Military Goo Ga.

The second foundation of this worldview is a near complete lack of historical perspective.  They accept all manner of historical propaganda without hesitation or question.  Everything from Washington could not tell a lie to the idea that every Indian victory was a massacre but every U.S. win was a battle, to Lincoln prosecuted the Civil War to end slavery, to the God-given right to dominate the continent, to “keeping the world safe for democracy”, to the justness of incinerating Hiroshima and Nagasaki, to the failed but “noble” effort in Vietnam to the need to fight endless wars all over the globe.  Even when it is established that the U.S. government lied; such as about the Gulf of Tonkin incident or the lie that the Iraqis stole all the incubators from Kuwait in 1991, they swallow whole the latest lie in the heat of the moment.

One does not have to be a tenured professor of history to engage in a little investigation of our past and to think intelligently about the centuries long string of lies told to us by our government and to then consider that they just might be lying to us about the enemy du jour.  In fact, if you read the newspaper consistently as an adult all you have to do is remember all the times the government was caught lying to us within the span of our own lives.  This simple act of historical remembrance is apparently beyond the grasp of the Yahoo Military Goo Ga.

It would be easy to assume that the Yahoo Military Goo Ga is usually a Trump supporter and I suspect that a disproportionate percentage of MAGA hat wearers fall into this group. However, the worship of the military, the failure to extend human rights to others and the lack of historical perspective afflicts people all across the political spectrum.  This was borne out by the recent spectacle of House Democrats chanting U-S-A, U-S-A on the floor of the House using the Russians as their foil.  Evidence for this is also present in the record of the Obama Administration; what with its Libya regime change and drone war.  The Yahoo Military Goo Ga is a bipartisan pest.

All of this has fueled a culture of violence that has seen the United States at war in 215 of the 230 years since the ratification of the constitution.  Not to mention the erection and maintenance of a global empire that has bases in over 150 different nations around the world.  The Yahoo Military Goo Ga is the electoral and popular support for a completely immoral use of aggressive military power.

As Christians we should, of course, be appalled.  To worship any entity other than God (even the UNITED STATES GOVMENT) is blasphemous and a clear violation of the First Commandment.  Our God is not to be mistaken with a violent unthinking destroyer of human rights and lives.  Our pledge is not to a flag or the “republic” for which it stands but to God alone.  He gave us brains.  Let’s have enough faith in Him to use those brains to understand that others are just as much children of God as we are and further, to understand the importance of historical remembrance in our faith walk.  Following God’s path will free us from being a Yahoo Military Goo Ga as well as rejecting the unthinking, faithless foundations of this group.