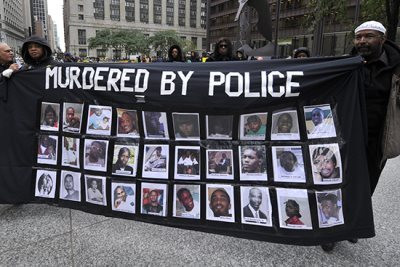 The thin blue line has always been propagandized as meaning that all that stands between us and violent chaos is the faithful police department.  However, what if in fact it is the police that are the source of the chaos?  More to the point, how should we view the near worship of the police that flows from politicians?  They have gone out of their way to mythologize and venerate the sacrifice of our fallen heroes.  As a part of this they constantly claim that police are under attack.  Is this really the case or is it more akin to the supposed war on Christmas?

Let’s get a few things clear.  First, just because one is an anarcho-capitalist doesn’t mean that one does not see the value in something like a police force.  It would surely look and act differently in an anarchic world, but we would have some kind of security force.  Second, it is a mournful and awful thing when anyone is murdered. Just because someone works for the government is not any kind of a reason to rejoice in the loss of life. These are people who have families who count on them and people who love them and we should lift up those who have suffered this kind of loss.  At the same time, we should hold those who speak on this issue to mourn the loss of civilian life as well.

In spite of the “attack on police” meme, it is clear that the violence is maximally directed by police toward civilians.  In 2018 there were over 1100 civilians killed by police.  The corresponding number of police killed in the line of duty is estimated at 150 in 2018.  In fact, the killing of police officers on duty are near record lows.  As an occupation police are not even in the top ten most dangerous professions in the United States.  It is way more dangerous to be a logger than a cop.

It is instructive to look where police are killing people.  This map of police violence tells much about the nature of this problem.  Disproportionately black people are killed by police, 3 times more likely as a matter of fact.  30% of whom are unarmed, compared to 21% of white victims of police violence. As the data show 69% of blacks killed by police were not even suspected of committing a violent crime.  As the map also shows this killing is weighted toward larger urban areas, however by state it is most dangerous as a percentage overall to live in New Mexico.  If you are black the highest percentage rate of police killings is in Oklahoma, Utah and Alaska.  Apparently the whiter the state the more dangerous it is to be black.

What the map should make clear is that these killings are very likely tied to the war on drugs. Inner city young black men engaging in non-violent drug exchanges are targeted by police and subsequently killed by them in disproportionate numbers.  We can conclude that ending the war on drugs would bring an almost immediate reduction in the number of people killed by police.  Along with the war on drugs as a cause of these killings there is the related issue of the militarization of the police, primarily by the federal government.  This is usually funded by asset forfeiture laws from drug busts, reinforcing the damaging consequences of the drug war.  This cause and effect of police killings would also be mostly eliminated by ending the war on drugs.

There are also many other touchpoints that police have with civilians that exist only because of the ever-growing scope of the government.  If you remember the poor man, Eric Garner, who was choked to death by the New York police, you should remember why they stopped him in the first place.  He was stopped for selling “loosies”, individual cigarettes, to willing buyers.  Why does the government have any say in a consensual, non-violent activity? Multiply this by hundreds of thousands of regulations of peaceful behavior and you have a situation where as an author stated we are all guilty of three felonies a day.  This gives enormous power to the police to interdict people virtually at will.  All this serves to magnify the possibility of a police officer killing you.  Remove the power of government to regulate every little aspect of our lives and you greatly reduce the possibility of these tragedies from occurring.

The other way to put a check on these killings is to actually hold officers accountable for the unjustifiable killing that they commit.  Police are half as likely to be convicted for killing someone. This helps produce a culture where police are too willing to use force too quickly.  I would add that racism alone does not account for this phenomenon. It is more of a police force vs. civilians issue than purely a racial issue as this story

There are those who still want to venerate the police for their “sacrifices”.  Yet as we have seen this is unwarranted.  They are not sacrificing in great numbers, as theirs is a relatively safe profession.  It is the police who are sacrificing civilians in the performance of their jobs. We should not be confused by assuming that these are honorable people “just doing their job”.  Yes, it’s true that nobody is all good or all bad and there is much good that police do.  They do deter some crime and they do get criminals off the street.  But at what price?  There are too many ways privately provided security personnel can do this better without the high price paid in innocent lives.  In the end police, like all of us have made a choice.  They choose to go to work for an enterprise that gets its funding from the theft of taxation and seeks to enforce social and political control via the outlawing of many voluntary non-violent acts that have nothing to do with safety or security and everything to do with aggrandizing governmental power.

It is not an act of love to pretend that this is not the case.  The Christian response must be one rooted in the love of neighbor.  We should not seek to defeat the police but rather to reach them with a message that much of what they do is not acceptable. A large part of this message must be that the way of Christ offers a better path for them than the way of violence. They made a choice to join a violent organization, they can make a choice to leave said organization.  We should offer all prayerful and material assistance to help police make this transition.  It starts with calling them out on the Thin Blue Lie upon which their mythological power rests.