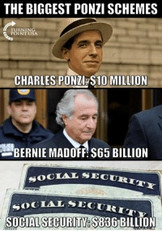 There is a persistent meme that comes around frequently on social media.  It is a particular favorite of older conservatives.  It usually looks something like this: 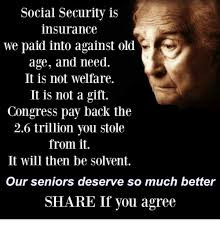 As is clear from the image this line of thinking claims that Social Security is a pension (with the underlying assumption that there is some sort of ownership right to your “personal fund”) and that it is at risk because the government “stole” money from the fund.  I suspect that they tell themselves this in order to sleep at night, sound in the “knowledge” that this program is not welfare.  This is especially important to conservatives, who claim to value limited government.

The reality, however, is quite a bit different than this fantasy.  The fact is that Social Security is insolvent, because of factors not related to money that was borrowed from the trust fund and the promises made regarding future benefits are not based upon a personal individual “pension fund” that each individual owns.  All of the data can be found here.

Let’s deal with that last part first.  Nothing about Social Security confers any actual ownership in these funds, the way a private pension or retirement account does.  It has always been a pay as you go system.  This means that the amounts you pay in as a worker fulfill the administrative requirements to allow you to access whatever benefits are available at the time of your retirement.  The Social Security Administration has made this crystal clear: “The money you pay in taxes isn’t held in a personal account for you to use when you get benefits. We use your taxes to pay people who are getting benefits right now. Any unused money goes to the Social Security trust funds, not a personal account with your name on it”.  Also they have stated that there is no pool of money with your name on it: “Since the Social Security system has not accumulated assets equal to the liability of promised future benefits, the social security wealth that individuals hold represents a claim against the earnings of future generations rather than a claim against existing real assets”.  Again, as per the Social Security Administration: “There has been a temptation throughout the program’s history for some people to suppose that their FICA payroll taxes entitle them to a benefit in a legal, contractual sense. … Congress clearly had no such limitation in mind when crafting the law. … Benefits which are granted at one time can be withdrawn.…”.  In short, there is no basis in fact, history or law to suppose that this is a pension fund in the way reasonable people think about pension funds.

Now let’s deal with the insolvency issue.  First, the program’s bankruptcy is not for lack of trying to mulct the taxpayers.  Between just 1990-2017 the taxable minimum amount went up by 148% while median worker compensation only rose by 118%.  In fact, in inflation adjusted terms the taxable maximum has gone up 2.5X sine the program’s inception in 1935.  The total tax burden of Social Security is 12.4% of worker income plus the 2.9% Medicare tax for a total burden of 15.3%.  This represents a direct tax on employment and earnings which tends to hold back both.

The program is structured so that it should exist on its own sources of income.  These are the aforementioned payroll taxes, as well as transfers from the general fund due to such things as tax holidays (as in 2011 & 2012), and interest on money loaned to the U.S. Treasury.  It is this last item that causes such confusion. By law all excess Social Security revenues must be loaned to the U.S. government.  The loans must be payed back with interest.  Currently the treasury owes $2.9 trillion to the fund. This is not money that has been “stolen” from the fund.  The treasury has never failed to repay borrowed money with interest.  What interest rate you ask?  5.2%.  Anyone out there getting 5.2% on risk free money?  No.  I didn’t think so.  These people get it because they voted themselves that benefit.  The money owed does present a cash flow problem for the federal government, as that is money that may crowd out other desired spending, but it does not represent a solvency issue for Social Security.  If need be the Federal Reserve can simply create the money to pay back the fund.  This does create other problems but not a solvency risk for Social Security.

Let’s be clear about the solvency issue.  It is massive.  It is projected that even after repayment of borrowed money the fund will not be able to meet the promises made after 2035 and benefits will be roughly 75% of those promises absent a tax increase.  After 2035 the shortfall to the end of the century is $35.2 Trillion, again this is after repayment of borrowed funds.  To make this up either taxes go up 25-33% or benefits are reduced 19-25% until 2093.  Another way to think about this is that to eliminate the shortfall we would have to put in $13.9 Trillion today to make up the shortfall until 2093 (assuming growth in that fund) or to cover from now to 2093 and beyond we would have to put in $29.3 trillion today.  Keep in mind the yearly output of the entire U.S. economy is about $20 Trillion per year.  This, in short, would crush the economy for current workers.

All of this came about because of the rapaciousness of the voting elderly.  As demographics worked against the program, they kept voting themselves increased benefits.  The current worker to retiree ratio went from 16-1 in 1935 to about 2-1 today.  There has been no change in the retirement age since the mid 80s (even then it only went up 2 years) even though lifespans have increased dramatically.  Benefits have also risen faster than inflation and faster than worker compensation.  Benefits also have become the main source of retirement income even though it was always supposed to be supplemental income.  On top of this there are many more people taking disability income from the fund than ever before.  From 1965-2018 the population increased by 63% but those taking disability rose by 484%.  In short, benefits increased by more than was ever sustainable.  Like all Ponzi schemes those who got in early won big.  If you worked at a lower tax rate and are now retired, you get today’s full benefits without paying today’s full tax rate.  It is mostly the Millennials that are being screwed in all of this.

Let us set aside the pernicious notion that someone stole the Social Security funds and that these beneficiaries “earned” their benefits and “own” this “pension”.  If it is a true pension that was earned, then retirees should be satisfied with the 75% of benefits that will be able to be paid out after 2035.  We all know that will not be the case and that this lobby will come to the government demanding money be paid out of the general fund and that current workers be punished ever more.  The amount by which Social Security is insolvent represents the amount that this program is pure welfare.  What has been stolen is the economic future of current workers and the fiscal stability of the federal government.  It was done because the elderly (with all apologies to Huey Lewis) have been taking from the giving because they’re voting for a living.