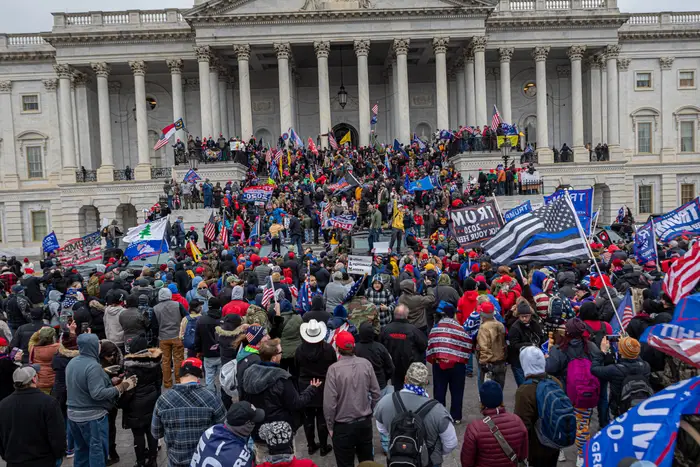 The riot that took place at the U.S. Capitol on January 6th. was certainly an ugly spectacle indeed, and tragically deadly. It has brought about the usual recriminations and massive hypocrisy on all sides. Those who condemned the summer BLM and Antifa riots are now trying to soft peddle this incident and those who called the summer riots “mostly peaceful” are claiming this as the equivalent of General Lee sacking Washington. The consistent and especially Christian position is that violence is never justified. This is particularly the case when both the summer riots and the riots at the Capitol are driven by the same thing: a drive for power. Yet both groups of rioters are being manipulated by the same group of elites.

The equivalency between the summer riots and the Capitol riots is clear when you get past the partisan lens. Both groups are seeking to gain or keep control, on behalf of their tribe, of the vast criminally violent powers of the government. Both sides are willing to use violence to achieve their goals. In the case of the BLM/Antifa groups they were quite willing to destroy government buildings as well as burn businesses and therefore livelihoods to the ground. While the right-wing rioters were focused on busting up the federal capitol building, they have shown themselves to be quite willing to take lives as in the Charlottesville attacks as well as to condone and advocate excessive police force against others.

Therein lies the crux of the matter. Vast chunks of the electorate are driven to violence and the acceptance of violence because the stakes for controlling the United States government have grown so large. This is true of both sides as can be seen here. This is a point I have made many times before and will continue to make for as long as I am able. The federal government alone controls 25% of the nation’s economic output and the vast regulatory apparatus that goes with it. On top of that those who control this organization have a vast say in cultural and moral issues (this is key) that serve the narrow interests of their clients. Add in the control of the U.S. empire with all its Messianic implications and you can start to see why the battle for control has taken on the qualities of a Texas cage match to the death, with both sides increasingly willing to resort to violence if the other side wins.

That is the way it seems to both sides of agitators. The irony here is that in reality it is the powerful who win with consistent regularity. The winners regardless of party are the corporatist elites who have access to power. The bulk of those on both sides who are agitating for change are the losers in this political and economic game and are growing increasingly frustrated by this fact. They are however, once again being played for suckers. Trump governed like a typical Republican serving elite interests and Biden has and will continue this approach (more on that next week). Even if the violence that both groups advance was to result in an authoritarian outcome, they would still lose out as that authoritarian (whether left or right) would still serve the interests of the corporatist elites. It is the increasingly painful effects of this elite control that drives these people to violence: stagnating productivity and real wages and an increasing wealth inequality. While this violence is not acceptable, it is understandable. Yet the violence only serves those who already have power.

In the aftermath of the riots there are calls to give the elites even more power. Again, this does not raise the stakes for the always powerful but for those who identify in a tribal way with one group or other of political and socio-economic outcasts. In short, they are being used by both sides to increase the power of those already in control.

The question arises; how did we get here? We got here like the adage about how you boil a frog explains; the answer is a little bit at a time. It started in the wake of the Civil War when the aftermath of that bloodletting left the federal government with vastly expanded powers. Since then, every “crisis” has resulted in a ratcheting up of governmental power; power which never goes back down to its previous level. This process has been well documented by the historian Robert Higgs.

It did not take long until the government grew steadily, not really solving the problems its growth was intended to solve and inevitably creating ancillary problems that the morally obtuse and economically illiterate sought to solve with yet another government program. As government began to control the commanding heights of the society and economy; education, the professions, and ultimately and crucially, the financial sector (via the Federal Reserve), the notion became simply assumed that government must “do something” to ameliorate all manner of problems.

However, dependency grew along with the demand for even more. Of course, no one wants to pay for any of it so various house prophets and whores arose to convince the masses that they could have everything all at once right now without the pain of paying for any of it, hence the rise of the Federal Reserve. Seekers of government favors arose and began to attach themselves to the body politic and so began the tribal fight for control of an ever more powerful organization that controls ever more of society with ever more deleterious consequences. All the while the elites just smiled and reveled in their bounty.

The control of the executive branch has become the most visible fight, as in all cases of government growth power concentrates in the hands of the executive. The tribal suckers can most easily identify with a single individual as the repository for their angst. Also, this is where the action is, and the legislative branch spinelessly lets the executive get away with this. Think of how powerful (and lawless) FDR was, at the height of his presidency having to go to Congress after a Japanese military attack and just 9 years later a vastly weaker Truman took us into Korea with barely a nod to Congress. Since then, the President controls the entire national “security” apparatus; the spies the assassinations the secret expenditures and the growing monitoring of economic activity and economic decision making, as always for the benefit of the elites.

Along with this growth we have seen the fight for control of the executive branch edge ever closer to outright violence, especially by those outcast groups bearing the brunt of the policies that benefit the elites. All the elites really need is acquiesce by the masses, and what better way to get that than by keeping them distracted with petty ginned up hatreds that avert their attention from the larger picture of the rapacious lining of pockets by the politically connected. In 2008 the Republicans pursued a ridiculous conspiracy about Barack Obamas’ birth and therefore legitimacy to be president at all, but in the end, it stayed just a conspiracy. In 2016 the ante was upped as the Democrats accused Trump of treason and the Russians of flipping the election. This led all the way to the Mueller investigation (which of course came up empty) and then to outright impeachment (One should not think that nonsensical conspiracies are in the sole possession of Republicans). 2020 saw it ratcheted up even further as both sides see the other as outright evil and with one side resorting to the violence we witnessed after hearing the exhortations of their leader. It was only Trump’s actual lack of serious will which prevented him from going all the way.

All of this was, however, just tribal theater. The elites DO NOT care. Did you notice this week that the stock market hit all-time highs? As long as the elites stand to get more “stimulus”, it’s all good. There is an economic end game to all of this that is destructive of civilization, but the elites are as short-sighted as anyone, so again, they do not care.

All the way, however, is just where the next authoritarian minded person may take this nation. The table is set with all the powers in place to take over the nation via an executive branch coup. All that is lacking (this may be from the left or right) is an authoritarian with the actual will to power and the drive to see it through. All of this because the masses cannot see that they are the proverbial suckers at the table being manipulated by the elites. I am fairly certain that the elites would not really care if an authoritarian emerged, so long as they get their goodies from the government. As always it is the outcast that will pay the price in broken bones and broken lives and stolen opportunities.

As a wise woman I know is fond of saying: if the government had only the power of the local weed control board nobody would care this much about any of this. The only real hope is to move inexorably to such a situation and have consensual cooperation replace political coercion. Otherwise an explicitly authoritarian regime may prove much harder to dislodge than a nominally democratic one.

I confess, that I fear it may be too late. I am not counseling defeatism but as always to fight the fight to break peace and cooperation into God’s Kingdom. However, we better get busy because the hour is much later than we realize.