The Real Reason for the Second Amendment 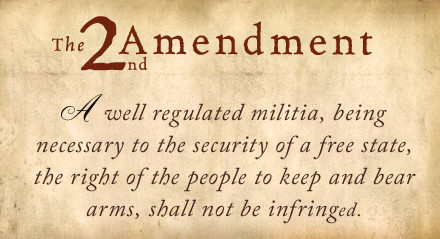 In the current debate about gun control and the constitutionally guaranteed right to bear arms there is little historical context given which would shed light on why the authors of the Constitution put this amendment in the document in the first place.

Proponents of gun control will tell you that you don’t need a second amendment right to a semi-automatic weapon to hunt.  I would tell you the second amendment has nothing to do with hunting.   They will then assume that you think you need such a right to protect yourself against home invasion or some other form of civil disturbance.  I will then counter that this occurs so rarely as to not even really register as a practical reason.  It is certainly not a reason that would have struck the framers as necessary.  Although, in Los Angeles in 1992, during the riots, if you were a shop owner you would have probably found these kinds of weapons handy and many in fact did.

Now Gun controllers are getting uncomfortable because they know where you are heading, yes the second amendment is about nothing less than maintaining the legal right to defend yourself against a government that is intent on taking too much power.  Nonsense they will reply.  How can AR-15s stand up to the United States military, what with their tanks and assault weapons, not to mention the air force.

How does any revolution or armed insurrection stand up against an established military?  The American, French and Russian revolutions all did it.  There are a multitude of other such examples from history which bolster this point.  Revolutions and armed resistance movements do not have to defeat a military in the field in a mass attack.  They only have to raise the cost to the government to the point that it becomes not worth the effort to keep trying.  This is why a bunch of musket wielding farmers were able to outlast the greatest military power on Earth at that time starting in 1776.  An insurrection or resistance movement frankly cannot be defeated if it has mass support of the people.  A lesson from U.S. history that the U.S. government might have kept in mind during the Vietnam War.

Then the gun controllers eyes will light up and they will tell you that in a Western nation such as ours this would not occur so there is no real reason to arm the populace in this manner.  Really?  Tell that to the Jews in 1933 Germany, in what was until then one of the better places in Europe for them to live.  Or tell the Kulaks in the Ukraine in the early 1930s during the Soviet led terror-famine that conservatively killed 14 million people.  What might this history have looked like if these groups were not systematically disarmed.

Now comes the final fallback position; this kind of thing could not happen in the United States, not the good ole US of A!  To which I will respond; you mean that it can’t happen here…again.  Because if you were African or Native-American it already did happen.  This nation kept Blacks as chattel property and committed nothing less than genocide upon Native-Americans.  Not coincidentally it was illegal to sell either blacks or Native-Americans guns.  This policy continued after the Civil War during the Jim Crow era.  In fact there is a body of historical work that suggests that Jim Crow extended only so far as the porch of a black man armed with a gun.

As a Christian and therefore a pacifist this is not comforting history.  I genuinely think there is an alternate path to this type of oppression as I have pointed out previously.  Comfortable or not this is the history.  It can scarcely be gainsaid that the experience of Blacks and Native-Americans would have been markedly different had they been armed.  Which is exactly why the framers of the constitution placed the Second Amendment into that document. (not to protect Blacks and Natives but we are not bound by their definition of a citizen or a human being).

It’s not as if these people were naïve.  They had just outlasted the greatest military power on the planet at that time in a revolutionary struggle and did it with weapons they legally owned.  Those who were wary of the enhanced powers the new constitution was giving the national government wanted this language in the document precisely to underline the need for this kind of backstop to give a tyrannical government pause. Under this theory that the framers were using, it is not necessary that all citizens be armed.  It is only necessary that the government think they might be.

We as Christians do not need to be ensnared by the this logic of the revolutionary generation.  We have the path of peace set before us by Christ.  That notwithstanding, we are ill advised to misunderstand why there is a Second Amendment to the U.S. Constitution.  We are equally ill advised to buy into a plan for the Federal government to forcibly strip  peaceful citizens of their right to own that which might give a too power-hungry government pause.

Let us instead show the world that we as Christians do not wish to use the power of the government to dictate how people live and to also show them there are ways to peacefully resist the encroachments of government.  As always let our living out of the Gospel of Peace be our witness to the Grace of our Father in Heaven.