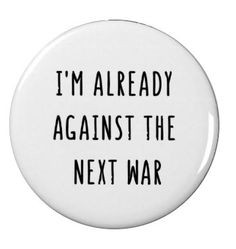 The single biggest objection to implementing a philosophy of pacifism is that it will not work and heap disaster upon humanity.  Let’s examine this more closely.  First I will look at how effective war has been as a policy, then I will look at how non-violent action has fared.

If you think about it all wars either produce a loser or result in an inconclusive result.  So, war has resulted in more losers and stalemates than victories.  Let’s go for the big game right off the bat and tackle the granddaddy of all “good wars”, WWII.

In the process the war resulted in the deaths of roughly 50 million souls and the loss of untold productive capacity of humanity.  In exchange the war liberated West Germany, about 96K square miles (about the size of Michigan) and Japan, 146K square miles (about the size of Montana), enslaved China (3.7 million square miles) and led to the rise of a cold/hot war that raged for 40+ years and threatened humanity with nuclear incineration.  Does any rational human being think this was worth it?  Quickly let’s dispatch the response that the war ended the holocaust.  It is probable that the holocaust could never have reached the heights of monstrosity that it did absent the fog of war.   In any event, the U.S. could have done more good without destroying Europe if we hadn’t rejected so many Jews fleeing NAZI Germany.  History is replete with such examples of the destructiveness and futility of war but a non-hyper patriotic look at the “good war” should suffice.

If war is not a practical solution, is pacifism any better.  Let’s look, briefly, at examples from recent history.  In 1891 Persians organized a passive resistance to a tobacco tax levied by the Shah so that he had to repeal it.  In 1902 Finland saw a passive campaign to oppose a Russian imposed draft that led to its repeal.  A successful general strike in Russia in 1905.  The effective non-violent struggle of Hindus in South Africa from 1906-1913, assisted by Gandhi.  The 1917 resistance by the Irish to British conscription.  The 1920-1936 struggle of the population of Western Samoa to gain independence from New Zealand.  The nearly two-decade long struggle for Indian independence led also by Gandhi, which resulted in the non-violent wresting of the jewel of the British crown. In this country, there is the Gandhi-inspired example of the Martin Luther King Jr. led struggle for civil rights.  In these examples, an armed uprising would have brought massive retaliation that would have generated far more destruction and perpetuated a cycle of violence that would never cease.

These are but a few of history’s examples of successful non-violent struggle to gain human rights and freedoms.  These struggles were not costless, however.  Many were killed for standing up for their rights and many more suffered imprisonment, torture and economic deprivation for their trouble.  However, this pales in comparison to the outrages that war generates, particularly upon innocent civilians.  Quite simply, no state power can withstand a mass refusal of a populace to cooperate.  If even a sizable minority simply refuse, the jig is up and the “all-powerful” state crumbles.  Think in this country if, say 30% of taxpayers told the IRS NO!  Even in the face of an invading army this kind of non-violent mass refusal to cooperate makes the entire enterprise not feasible to the point where any nation that attempted it would not be able to hold onto such a “conquest”.  Even the NAZI’s could not have held any territory at all in the face of such resistance.

I am sure one objection would be ‘but non-violent struggle takes such a long time that it is not practical”.  A long time like the 80 years it took the Dutch to violently gain their independence from Spain, 1568-1648.  Or perhaps a time such as the Hundred Years war or the 30 years’ war or the nearly 50 years of off and on again violence in Europe to open the 20th. century.  How about the perpetual war that Rome faced during the entirety of the Imperial period?  “Victory” does not guarantee peace.  Even the American Revolution ushered in a series of wars on the frontier against the Indians as well as another war with Britain.  As far as war is concerned victory is defeat for peace never really arrives.  The “victory” at Yorktown has seen the U.S. at war in 214 of the subsequent 228 years.  Some victory.

If we look objectively at history we can see that peace holds out a far better chance of securing our human dignities without nearly the destruction that war has caused.  It should not surprise the faithful that God has a better way for us to proceed than to kill one another and destroy civilization.  This path of peace is, to be sure, a most difficult path.  It lead Jesus to the Cross and it may very well lead us to our earthly demise.  But, as faithful, we should recognize that there are worse things than dying.  Following Christ’s example will provide us the best chance at achieving the kind of world that God intends for His children all without betraying the faith God had given us.  In the end, that is what is needed: faith.  Faith that our God is a God of both principle and practicality.