The Power of Ignorance 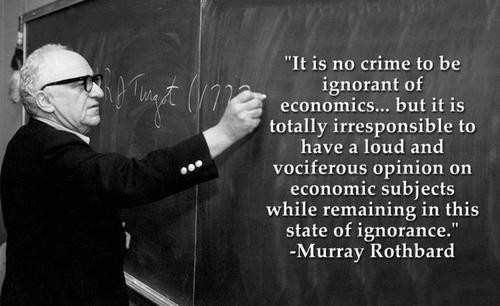 I am not suggesting that everyone needs to know a great deal about economics.  In fact, most people in their day to day lives do not need to know basic economics.  You can succeed just fine in your career without such knowledge, even in a business occupation.  If, however, you want to evaluate the policy choices put before you as a citizen or want to comment on such matters then it is absolutely imperative that you understand basic economics.  This is where the civic culture almost completely derails.  This derailment is a bipartisan reality, true across the political spectrum.

The most egregious, piece of ignorance that people engage in is to ignore costs.  Everything has a cost.  The most basic economic expression of this is opportunity cost.  The cost of not being able to do two or more things. I can either go to a movie or go to dinner, I cannot do both.  The cost of the dinner is the movie, the cost of the movie is dinner.  The fact that we express these costs in monetary terms should not cloud this basic fact.  The reason that economics is called the dismal science is the dismal realization that, no, we can’t have everything.  We intuitively understand that in our personal lives, especially when communicating to our children.  Why do people then fall for this fallacious thinking regarding public policy?

Time and again advocates for a policy will state that this or that program will benefit this or that group.  True enough but the unasked question is; at what cost?  Along with that is, who pays this cost?  The argument is often made that we are the richest nation on Earth of course we can afford, fill in the blank on your favorite program.  There is nary a concern about what any of this will cost.  To act as if costs do not matter is to deny the fundamental reality of God’s universe, which is scarcity.  We have an unlimited list of demands we want in life but the means to procure those items are scarce.  It is this relative scarcity that leads to the need to economize.  To deny all of this is frankly insane.

Flowing from this fundamental error is the main policy damage, which is to interfere with freely set market prices.  The most damaging of which is interference with the interest rate.  The interest rate is the most important price in a modern economy.  The wonkish explanation for this is that it is the “intertemporal coordinator”.  What this means in English is that the interest rate coordinates current activity with future production.  It is this price that signals to entrepreneurs whether a project started now is likely to produce a profitable (meaning wanted) item in the future.  Artificially lowering this price causes all sorts of problems, chief among them is the creation of unsustainable booms followed inevitably by crushing busts.  See here.  This interference certainly helps some but at a fearsome cost to others.  Sadly, it is the power of economic ignorance that keeps this policy alive.

Another example of this interference in prices is the minimum wage.  It is a superficially attractive policy to raise wages.  That helps workers, right?  Some workers yes, the majority no.  This blithe interference in the price of labor ignores the real costs involved and expresses a fundamental ignorance of how wages are set.  Briefly they are set based on how much a worker produces.  Understand that as a species we can only consume what we produce.  If we want to consume more we must produce more.  Making workers more productive by way of providing them more and better tools(capital) is the only way to do this.  To raise the price of labor beyond the level of productivity will ensure large scale unemployment for labor.  No business person will be able to pay $15/hour to a worker if they only produce $10/hour of products.  Ignoring these costs and interfering in this price relationship is a sure way to forcibly make a large number of workers unemployable.  We cannot legislate prosperity; and it is free market advocates that are considered idealists!

Another erroneous ignoring of costs and subsequent interference of freely set prices is the current rage on the left; a universal basic income.  The idea is that in the richest nation on the planet we can “afford” to give people a guaranteed base income.  Set aside that the U.S. provides comparable non-cash welfare benefits as other Western nations.  The idea itself ignores the costs of such a proposal.  The real costs are of course the disincentivizing of both the giver and the receiver of such largesse.  The  “giver” of course has more of the fruits of their labor taken from them meaning they have less incentive to work than they otherwise would.  Does anyone really doubt that increasing taxation places a drag on worker incentive. The recipient also has less incentive to produce than they otherwise would.  If say a person received $1000/month is a Universal Basic Income and they are faced with the prospect of a job that pays, say $2000/month, what is really going on is that we are asking the worker to work for $1000/month, the other $1000 coming at the expense of the taxpayers.  You lower the cost of leisure and not surprisingly you will get more of it.  NOTHING is costless.

Production is the only way to increase our material wealth and this is maximized by way of a freely functioning market with rising levels of capital (think tools) investment.  A basic understanding of economics would allow the citizenry to be able to understand that all of these policy ideas are the work of charlatans.  It does not take a lot of effort to become familiar with sound economic thinking.  A great place to start is Economics for Real People and of course the great classic Economics in One Lesson.  These works and many others, if you are interested, can make you a better, more informed citizen.  At the very least it will make you wary of those who claim you can have something for nothing.  As Christians we should remember who it was that first told mankind they could have something for nothing and remember where that led.