The King on the Mantle 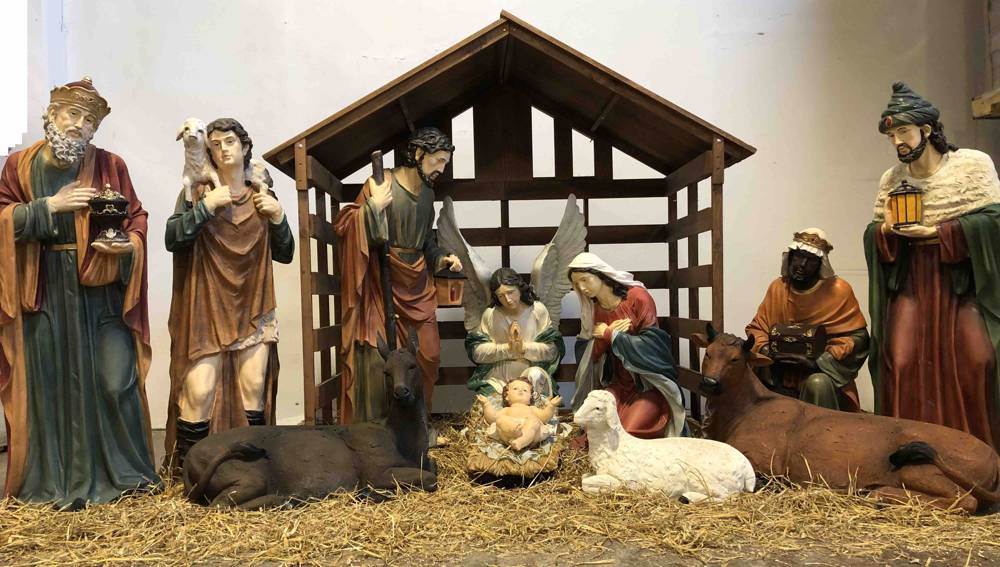 My yearly task during the Great Christmas Decoration Explosion that occurs around Thanksgiving is to mostly bring the boxes up from the basement and return the empty ones from whence they came. It is my wife’s task to place all the decorations just so. It’s not that I don’t really want to (I don’t, for the record) but that even if I did want to, I would make a hash of it. She outright rejects my yearly suggestion to only put out the Charlie Brown Christmas Tree, with its one lone red ornament.

The exception to this annual tradition, so long ago negotiated, is that I set up the nativity set. Mostly I am allowed to do this because it goes in the same spot and there is little that I can screw up in this process. Also, it is a nice set that my mother gave us many years ago, so it seems appropriate that I set it up.

This year I had a revelation. As always, I put the baby Jesus in the center of the manger as the focal point and arrange the other figures around Him. It suddenly struck me, after only 20+ years of doing this, that this was the perfect metaphor of the season. Right there in front of me was everything we need to know about the Feast of the Incarnation. Everyone in this scene was there for Jesus and is there to honor Jesus and praise and worship Him. That is, all were submitting themselves to the will of the Father through His son.

The Parade of Servants

There are, of course, the animals. It is not surprising that they are submitting. I mean, that’s what animals do. Not our animals (dogs) of course, we have found it easier to work around what they want us to do, but you know, other people’s animals. Certainly, barnyard animals as pictured in the Nativity Scene. This stands as an excellent reminder that all of Creation submits to God and that we are but stewards here.

Next are the shepherds. We are not surprised at their submission, as they are humble servants. We see them as mostly a backdrop to many stories. Although it is notable in the Christian tradition what an important role these most humble of servants have in proclaiming the Good News. They also stand as one of the great metaphors that Jesus would use in His ministry, the Son of Man as shepherd over His flock. In any event, we generally see them in a role of submitting to God.

Then there are the parents of the baby Jesus. This is a little more surprising (at first blush, that is) that they would be seen as submitting. It is not surprising at all, after some thought. Sure, they submit to Him as God’s son, as Mary did so gracefully when told of God’s plan for her. Joseph also had his moment of doubt but in the end he dutifully and not without sacrifice submitted to God’s plan as well.

This submission of the parents should not be surprising on another level, though. It is an entirely human response to serve your children. Not that this is the lived reality for so many, sadly. Yet, we all recognize this as the standard to aim for. We are here to do everything we can on behalf of our children. Mary and Joseph certainly did this in the birth narrative, and beyond. They travelled far and sought out what arrangements they could, all to safely bring Jesus into the world. That they stand over Jesus is not simply a religious metaphor but the human reality we should all strive to meet.

The next group we see standing in submission to the newborn King are the earthly kings themselves, the so-called wise men. This should not surprise us, but the way so many carry on in deferring to earthly power this might seem a shocker. ALL power is to submit to God. This scene reminds us that only the will of the Father should be operative in our lives. This is so because we believe and recognize that God has given us everything. Not even earthly kings or “wise men” are above our Lord and Savior. These kings understood that, so should we.

Then there are the angels. Angels, above us in the biblical pecking order, as humans are made a little lower than the angles (Psalm 8:5). Yet even these heavenly beings are there to honor and worship and submit to this newborn. This clearly shows that God intends for us to know Him through His son and that there is in fact no difference. One of the central mysteries of our faith is represented by the placement of the angles surrounding the baby Jesus.

So, right there on your mantle or in my case, the piano, is the sure and certain lesson to be learned this and every Advent Season; that Jesus Christ is Lord of ALL, and ALL God’s Creation is to bend a knee and submit to His will. As a long dead cantankerous theologian once put it “This is most certainly true”. Let us pray that we don’t forget this lesson when the nativity scene goes back in the box on New Year’s Day.