The Irrelevancy of Caesar 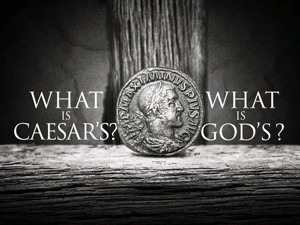 The Common Lectionary had this text from Matthew (Mt 22:15-22) as the Gospel reading last week.  This and the corresponding Mark 12:13-17 and Luke 20:20-26 contains the famous story of Jesus telling the Pharisees to give to Caesar what is his and to give to God the things that are God’s.  This is clearly one of the key “political” texts in Scripture and is worth some reflection.

My view of this text is heavily influenced by Jean Lasserre’s War and the Gospel, specifically pp. 86-94, which I will first briefly summarize before adding some thoughts of my own.

In this text, Jesus is asked by the Pharisees and the Herodians whether it is lawful to pay the Roman tribute or not.  That is, is it contrary to the First Commandment to do so.  They are of course trying to trap Jesus.  If He says yes, then He is acting contrary to the law, and is not the Messiah.  If He says no then He is a threat to the Roman state.  The nationalistic Pharisees want a no, the collaborationist Herodians want a yes.

In His answer, what Jesus does not do is offer a generalized defense of the state or its activities, contrary to what many commentators believe, far from it as I shall argue.  Nor is He relegating the church to a simple spiritual role of “caring for souls”.  He is answering a question regarding the payment of this tribute.  In His answer, Jesus avoids both a yes and a no.

Jesus forces the questioners to produce the very coin they are discussing from their own pockets and making them verbalize whose image and inscription is on the coin; that of Caesar.  In so doing, He unmasks their hypocrisy and clearly shows that they have answered their own question. He simply says that if it is Caesar’s coin, then give it back to him.  That He does not comment further indicates that He is alright with paying or not paying, He is not blaming them.  Jesus knows the insoluble problem here; pay and possibly violate the First Commandment, refuse and be crushed by Rome.  He leaves it to each to determine what they are called to do.  In answering this way, He simply indicates that Caesar has de facto political authority.

What Lasserre points out, however, is that Jesus gives a truly Messianic answer to this question.  First, by answering in a way that gives Him the decision as to what is God’s and what is Caesar’s He is answering as Messiah.  That there is even an idea of a split was a serious challenge to Caesar, who considered himself a god.  Second by forcing them to produce the coin and offering a recognition of Caesar’s de facto power Jesus emphasizes the earthly limitations of Caesar’s authority, also a Messianic statement.

By saying give to Caesar what is Caesars’s, a coin and give to God what is God’s, Jesus is making an explicitly Messianic claim.  We know what He thinks we owe to God; everything.  Later in the same chapter of Matthew (MT 22:34-40), Jesus indicates what He thinks is the greatest Commandment “You shall love the Lord your God with all your heart, and with all your soul and with all your mind” (emphasis mine).  Yes, Caesar has de facto earthly authority but that authority comes from God, as Jesus would remind Pilate later. All political authority serves God’s purposes for the merciful redemption of His creation, whether we understand it or not (that fact does not make it morally tolerable, however).  By positioning Himself as the arbiter between God and the world He is also making another explicitly Messianic claim.  In the process, He clearly delineates the truly limited authority Caesar possess.  As Lasserre states “Caesar demands this coin, which belongs to him; so return it to him.  It makes absolutely no difference to the Messiah’s kingdom”

It is here that I think Lasserre fails to grasp the importance of his own insight.  In stating Caesar’s irrelevancy, Jesus is not offering a withdrawal from politics or a life of quietism.  He is in fact making a bold political statement and a profoundly radical and seditious one at that.  If you want to make a statist red-faced with apoplexy, then claim that they are irrelevant.  Earthly powers would rather you pick up a gun and attack them than to claim they are irrelevant.  All regimes depend upon what Ludwig von Mises termed “ideological might” for survival.  This is the widespread belief that like it or not the political authorities are relevant and legitimate.  If a state loses this they lose control.  It would not even take anything close to a majority for this to happen.  If, say 20% of U.S. taxpayers simply refused to pay then the game’s up and the IRS knows it.

This is what makes the message of Jesus such a threat to the state.  In giving ALL our lives to God there is no room for state idolatry.  Yes, they can exercise all the earthly power they want, God is using them for His purposes and there is nothing the state can do to change this fact. The life death and resurrection of Jesus destroys any allegiance we may feel to earthly powers and turns all our attention to serving God.  In so doing we may non-violently resist the state and declare it to be the cosmic irrelevancy it is, with full assurance that we are following in Jesus’ footsteps and serving God with All of who we are.  Please note that not all are called to serve God in this way, if Jesus will not blame the many for not resisting the state this way neither will I, especially as there are so many ways to serve one another.  So, give to God what is His; everything; as for Caesar; tell him to fuck off!