The Historical Foundation of Jesus’ Ministry 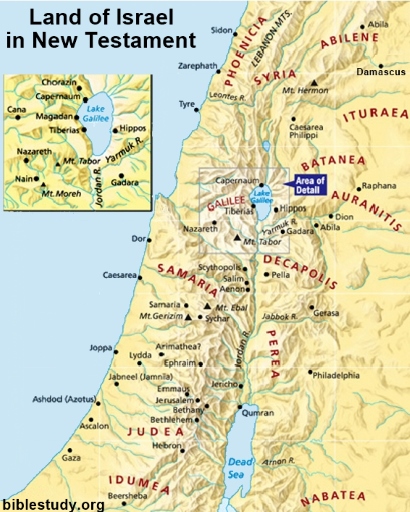 The correct position regarding history is that it is really God’s story and humanity’s place within that story. It is a story of God’s love, His Grace and His power. I have several times argued for the importance of history, even going so far as to define history as a Christian ministry. I have also used the perspective of history to illuminate God’s call for humanity to give voice to the voiceless, here and here.

Undergirding this focus on history is my firm belief that things generally work out the way they are supposed to. That is not a rejection of free will nor humanity’s responsibility for the things we have done. Rather, this is an acknowledgement that, in the end, God is in control. He has given us creation and the whole of His kingdom, how we respond is up to us. Christian historiography would hold that it is all moving to the merciful redemption of all God’s creation, at a time of God’s choosing.

This would, for the believer, explain the rise of the Jewish nation as well as the rise and worldwide impact of Christianity. Before we get too arrogant, it would also explain the impact of Islam and a host of other faith traditions. It would also mean that God will likely want answers for what we have done in the name of His son…uh oh!!!

In response, many will say that things could have turned out differently at any point in history. I would answer that this is true…but they didn’t, did they? It appears that all along, regardless of the faith of the unfaithful, God’s story, HIStory, is unfolding with God still firmly in charge.

All this being the case, it would behoove us to understand the history into which Jesus stepped into and why this is so critical to understanding what He accomplished.

We simply cannot understand the ministry of Jesus without taking into account the history of the ancient nation Israel. I am not going to give a blow-by-blow account, but jump into the story after the Jews have returned from their exile about the year 537 B.C. After having their nation blown up and carted away by the Babylonian empire the Jews were allowed to return and try to rebuild their world.

Amazingly enough, they retained their faith in God. Most people would have blamed God for the fall of their nation and walked away. Not these people. The looked firmly inward and realized they were the ones who blew it, and they got their just desserts.

Upon their return they rebuilt their faith traditions and in fact strengthened them into something moderns can recognize as Jewish. This was not easy. First, they had to deal with the Samaritans, who were the remnants of the northern kingdom of Israel that was conquered in 720 B.C. They were none too happy about a return of the remnants of the southern kingdom of Judah. Within 150 years of their return the reconstituted Jewish culture was faced with the invasion of Alexander the Great and after his death the Hellenistic kings that ruled over the remains of Alexander’s empire.

These kings and their minions were hellbent on imposing Greek (Hellenistic) culture on all this area. They were successful to a stunning degree. Yet, the ancient Jews pushed back. They did not desire to go the way of Samaria nee the northern kingdom (Israel) and disappear by blending in with the dominant culture. The put-up great resistance to the syncretistic pressures put on them by the Hellenes, to the point of armed resistance.

They insisted upon a separatism that bordered on arrogance. They discouraged intermarriage and would not bow to the Greek gods. They maintained their religious establishment and defended their rebuilt temple as the center of their faith proclamation. The Hellenes responded with ever more oppressive measures in their attempt at cultural colonization. They went so far as to defile the temple. This sparked a general revolt, known as the Maccabean Revolt. The aftermath of this is that they more or less maintained their cultural identity, even after the Romans occupied Jerusalem around 65 B.C. This state of affairs was maintained until the Jewish temple was destroyed in 70 A.D. The final blow came in 136 A.D. when after the revolt of Bar Kokhba the Romans crushed the Jews and dispersed them all over Europe.

This is not to justify the violence perpetrated by the Jews, as Jesus did not. It is simply to recognize this is what happened and to use this understanding to see how Jesus built upon this historical reality. That Jesus did not endorse this (or any) violence should be clear both by the fact that He did not live out or advocate any such violence and in fact was sent by His Father precisely because the nation Israel kept screwing up. However, it is the historical reality that Jesus could not have built His ministry in a reality other than the one into which He was born and lived.

This separate Jewish culture was what allowed Jesus to take the traditions of the Jewish faith and to both fulfill them and to build something so radically different that it can only be explained because of the presence of Jesus Himself.

It was in the context of the separatist Jewish tradition that Jesus insisted on calling out the Pharisees and the Sadducees as not embodying their own faith tradition. It was His presence as God’s Son that was the fulfillment of the promise to send a Messiah. It was as a Jew that Jesus chased out the money lenders from the Temple because they were violating the promise, made in Isaiah to make the Temple a “house of prayer for all people”. Without the existence of this separate Jewish culture none of this would have made any sense to anyone. You could argue that Jesus could have arisen outside of that faith tradition, yet again He didn’t. Aside from that, it would be difficult to see Jesus having the same impact as a free-standing Messiah in any other extant tradition of the 1st. century. How would this even work in a polytheistic tradition such as existed in the Greek world. It only made sense within the Jewish tradition.

It is critical to remember that while Jesus built His ministry within this separate Jewish tradition, He built something radically different. He built a ministry that included everyone. A ministry that invited everyone to partake. It was directed most especially to the other, the outcast, the maligned and the mistreated. In the process Jesus extends God’s Grace to all those who have given up hope that there is any Good News left to hear in this world. And He did it all by laying down His life for others, not by taking any lives at all.

This is so different from the Jewish tradition that it can only be explained by the person of Jesus Himself. It is Jesus that built upon this foundation the radically inclusive ministry that we call the Christian faith. Yet, none of this could have happened without the historical foundation of Judaism.

In the end this is all a great lesson in the idea that “what got us here won’t get us there”. We need to honor, respect and understand our history (awfulness and all). Yet, as Jesus showed us, we are not destined to be history’s prisoners. This is a lesson for us personally and as a community. No matter how awful or checkered our past, we can use it and build upon it in radically new ways. Jesus showed us that this can be done. In faith we owe it to Him to continue in that tradition.