The Faithlessness of Medicare 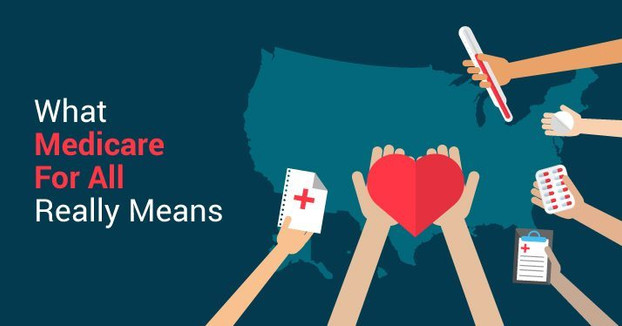 Medicare for all is all the rage in the Democratic party these days.  It is an idea that is endorsed to some degree or other by all of the 20 candidates they have seeking their presidential nomination.  This is certainly an idea whose time has come…and gone. It is frankly a scam and a unique piece of public policy insanity.  It is also, from a faith perspective, an idea based on a severe lack of faith.

If we are thinking about Medicare for All, it is helpful to see how Medicare for the aged has been going. It is true that many more of those over age 65 have health insurance.  But we have to ask the question that statists never ask; at what cost?  The costs have been enormous.

First of all, the problem of health insurance and health care for the aged was as bad as it was mostly because of the government.  By the mid 1960s, prior to Medicare the rate of overall uninsured was dropping, so that it was approaching 20%. The number for seniors with insurance was about 25%.  This reflects that by this time most insurance was provided via employers because of U.S. tax policy that tied insurance to the workplace, itself a major intrusion into the medical marketplace beginning in the 1940s.  Also, this does not mean that seniors were without health care itself but mostly faced issues surrounding catastrophic expenses and/or long-term care (which was not as serious a problem as people did not live as long then as they do now).  Keep in mind that medical expenses were already driven higher prior to Medicare because of government licensing of medical schools and practitioners as well as the restriction of care facilities at the state level via “certificate of need” requirements.  So, of course the government responded to the increase in costs and the reduction in insurance coverage caused by prior government policy by instituting a massive new governmental program; Medicare.

The actual costs of Medicare were itself enormous and vastly underestimated.  When the program was instituted in 1966 it cost $3 billion and was estimated to cost in 1990 $12 billion (accounting for inflation).  The actual cost in 1990? $107 billion dollars.  Today it is close to $800 billion.  More disturbingly the amount of benefits promised to Medicare recipients over the next 75 years exceeds current revenue sources by a staggering $33 TRILLION.  To put this on a solvent basis would require even higher, more extortionate levels of taxation, which would retard capital formation, sustainable job creation and further erode the economy’s ability to support this program.

None of this should be surprising to anyone who understands basic economics.  By separating the consumer (patient) from the payer (government, third party insurers, who still provide some small check) you create an incentive to shoot the works in terms of testing and treatment.  A culture develops that assumes all means available are prudent to undertake; and why not, somebody else is paying for it. If a provider tells a patient that a $3000 test has a 2% chance of yielding usable information, in a rational market the test would not be done, in our government mandated irrationality, the test is automatically ordered.  This becomes an entirely predictable, artificial stimulus to demand that will inevitably raise prices.  This is the explanation as to why healthcare costs are rising so much faster than the general price level.

The other, related phenomenon is that now that healthcare is in the political realm, both parties will fall all over themselves to increase benefits to the aged (the key political constituency).  The Democrats always seem to be the major champions, but it was the Republicans who pushed through the prescription drug benefit Medicare Part D, which was the biggest expansion of the program since its inception.  Even the ardent opponent of Medicare in 1965, Ronald Reagan, by 1980 was assiduously defending the program as if he himself thought up the idea.  Currently, Donald Trump has taken any change or restriction of Medicare off the table.  We saw this phenomenon repeat itself regarding Obamacare, as the Democrats pushed it through initially, the Republicans swore to repeal it and when they had the chance, discovered that they were really alright with it.

So, in the face of these economic and political dynamics that have shredded the finances of the U.S. government and completely distorted the medical marketplace, what do the Democrats propose?  Why expanding this unstable, monstrously expensive program to the entire population, of course.  It’s like a manger telling her boss “yes, we are losing $10 per unit, but we will make it up on volume”.  The proposals on the table would bring into the subsidized marketplace millions who will have no incentive to seek out cost-effective rational methods of testing and treatment.  Additionally, many more services will be covered, such as dental and long-term care. Services offered by no other Western nation with a government run program.  This program would complete the disconnect of health care from any rational cost-benefit examination and socialize U.S. medicine.  Don’t be fooled, whomever pays the bill controls the provision of services.  If the government becomes the single payer, then they run the entire healthcare system.

Now proponents claim that, yes taxes will go up, but that the total of taxes and insurance premiums will go down.  There is some doubt about this, especially after the politicians inevitably increase the benefits for favored political constituencies.  Also, they claim that administrative costs are lower with Medicare than private insurers. Doubtful.  These expenses are costs relative to benefits, if benefits are higher (and Medicare rarely says no) then the costs will be “lower”.  It’s a government defined con game designed to mask the gross inefficiencies of Medicare.  Also as this article points out the Medicare for all plan hinges upon lowering all medical reimbursement rates to Medicare’s level (private insurers pay more).  This would conservatively lower practitioner and hospital revenues by 40%, driving scores of them out of business, thereby lowering supply and lowering the level of service (think the post office with stethoscopes).  It will plunge the healthcare marketplace into complete chaos and enormously damage the economy in the process.  I have discussed some possible solutions that would actually improve things but neither party seems inclined to make real progress, so be prepared for things to get much worse before they get better.

The truly vile aspect of all of this is the faithlessness that it shows.  I know that there is needed a separation of church and state (as well as state and economy) but does public policy have to be animated by such a blatant faithlessness?  Neither party evidences any faith in human ability to provide for ourselves as rational adults.  We must apparently be treated as infants and be told how to order the most intimate parts of our lives.  God gave us Ten Commandments; the U.S. government gives us a 70,000+ page Federal Register.  I mean, how in heavens name did we survive the last Ice Age without food stamps? Faithful people know that we can feed, clothe and shelter ourselves and increasingly since the Industrial Revolution provide for a range of goods and services undreamed of by our ancestors, among them, modern healthcare.  The surest way to destroy all of that is to be of such weak faith that we think the government should run things instead.

Substituting the god of government for the one true God is not what we have been called to do. So, let’s be faithful enough to demand our God-given rights to be left alone to provide for ourselves out of the gifts God has given us and to, before the statists object, state that out of our abundance we can and will care for those truly in need.  This is genuinely good news that we can joyfully proclaim to the faithful and the faithless alike.