The Chimera of Tax Reform 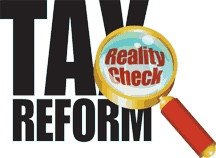 Now we know that all taxes violate the 7th. Commandment as I discussed here.  What then should we make of the tax “reform” debate?  The criticism of the Republican tax proposal from the Left is that it is a massive tax cut for the wealthy, the Right says it will spur the economy forward.  As is so often the case too many are missing the bigger picture by getting bogged down in the minutiae of the unfolding political battle.  Let’s be clear there is NO tax cut on offer for the economy.  The only way to cut taxes is to cut spending because every dollar spent is a dollar taxed.  This is most true for a government running a deficit.  If a government was running a surplus then the number to focus on would be receipts.  In the case of the U.S. government, the number to focus on is outlays, for that represents the deadweight loss to the economy.

There are only three ways to raise money that is being spent and they all represent taxation.  First is direct taxation (the least popular), second is debt (which represents current taxation in the form of interest on previously borrowed money) and third from inflation (which is clearly a tax as even the liberal Daily Kos shows).  Each of these forms of taxation produces winners and losers, inflation being the most insidious tax because it is stealthy and profoundly regressive. The point is that however you raise money for government expenditures you transfer resources from the productive to the unproductive sector of society.

No government spending can occur without an increase in taxation.  There is no way around this.  Statists will claim that debt does not matter because we “owe it to ourselves”.  This is of course nonsense.  Discreet people and institutions hold that debt and benefit from its issue.  Regardless it represents a transfer of resources.  Some will claim that expenditures will not create an additional tax burden because that spending produces employment not otherwise available and will add wealth to the community.  This too is nonsense.  Let’s say a government bridge gets built for $1billion.  That means that the taxpayers have $1billion less to spend on things they valued more.  Every public job created means a job destroyed or not created by the real economy.  This reality is true of all public works.  These government projects are visible.  What is not visible are the goods and services that could have been produced had people been allowed to direct investment and consumption as they wished.

The other reality to keep in mind is that all taxes in the end discourage production.  Regardless of how the burden of taxation is borne, those taxes will affect the actions and incentives of those taxed.  If a business or individual loses 100% of every dollar lost but only keeps 60% of every dollar it gains, it’s actions are affected.  Business will not expand operations or expands only those with little risk.  Individuals will slow their capital formation and damage future growth to the economy.  Newer machinery and products are not developed or developed more slowly than they would otherwise be.  Consumers are therefore prevented from obtaining better and cheaper products and real wages are lower than they would otherwise be.  You can see a more detailed analysis of this in Murray Rothbard’s Man, Economy and State, chapter 12.

What then is all the political hubbub?  That concerns the fight over the distribution of the tax burden or the so-called tax incidence.  Every interest group and faction in Washington is trying to get others to pay more than them.  In this way, they can protect their industries, get more assets and investments into their sectors of the economy and generally short-circuit the need to provide better goods and services to consumers in the marketplace.  This is true even for those willing to let the debt go higher via deficit spending (make no mistake, the current proposal would explode the deficit).  This is the revenue side of the battle that occurs over fiscal policy; everyone is looking for an advantage.  I outlined the tax and spending issues here and the beneficiaries of debt and inflation here.

Specifically regarding taxes the whole game is about getting credits and deductions for your favored interests group.  If you set a nominally high tax rate then offer deductions and credits for your favored groups you can prosper without having to engage in the tedious process of performing a service in the marketplace.  This accounts for the complexity of the tax code.

The number and complexity of tax credits, deductions and diversions is legion.  Tax credits are the most valuable.  They reduce your tax bill dollar for dollar by the amount of the credit.  Some of these include: the child tax credit; child and dependent care credit; elderly and disabled credit; lifetime learning credit; adoption credit; residential energy efficiency credits; and retirement savings contributions (for low-income families)

Deductions are not as valuable but still important in that they can reduce your taxable income by the amount of the deduction.  Some of these include: medical & dental expenses (more than 7.5% of adjusted gross income); home mortgage points; charitable contributions; casualty & theft losses; contributions to retirement savings accounts; certain education and work-related expenses; and a myriad more.

The upshot of all of this is that because of the polices put in place by the vested interests in the economy, more money and resources flow to these sectors of the economy than would otherwise be the case in a truly free market.  Whether this process is simplified in the current reform is an open question (I doubt it will happen), even if it does the lobbying simply shifts more completely to the spending side and money flows more directly into the pockets of tax consumers than indirectly via the tax code.  Either way the overall tax burden continues to rise because spending continues to rise. All this amounts to the fiscal equivalent of rearranging the deck chairs on the Titanic.   Spending equals taxes and not even the United States government can change the irrefutable logic of this.  So, if you want real tax reform that lowers all taxes, provides an environment for rising real wages and sustainable economic growth then demand real cuts in spending.