The Already, The Not Yet 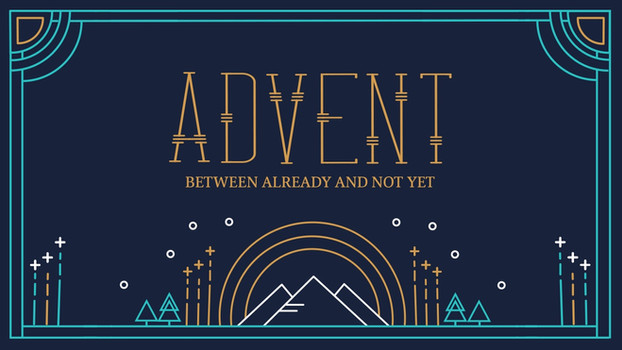 Advent is here, wasn’t it just Easter?  The church year begins again.  The word means arrival, usually of something or someone notable.  Indeed, that is what we celebrate during this season of the church. We mark the arrival of God among us, Emmanuel.  It brings joyous anticipation of the arrival of the King, the one whom we serve, Jesus the Christ.  This is, of course, a commemoration of what has already occurred.  What we really are looking forward to is the return, Jesus 2.0. Which is why the Gospel reading for the First Sunday in Advent is Luke 21: 25-36, which speaks of the End Times. However, as I pointed out last year we do not need to wait for this arrival.  He is still with us, and we are already living in the Kingdom.

All this brings up the tension between what has been termed “the already but not yet”.  I most assuredly did not come up with this, theologians far brighter than me did that.  It is however, a concept worth pondering.  The idea is that believers are actively living in the Kingdom of God, even though that Kingdom will not reach its full expression until the future.

There is good Scriptural basis for this notion.  Hebrews 2:8-9: “As it is, we do not yet see everything in subjection to them, but we do see Jesus, who for a little while was made lower than the angels, now crowned with glory and honour because of the suffering of death” as well as John 18:36 where Jesus states His Kingdom is not of this world.  Also see 1John 3:2: “Beloved, we are God’s children now; what we will be has not yet been revealed. What we do know is this: when he is revealed, we will be like him, for we will see him as he is.”  So, the Kingdom is in a real sense already in force.  Hopefully we are, imperfectly of course, living out that Kingdom in our daily lives.  Yet we also look forward to the day of Jesus Christ when everything will be made subject to Him and God will return as it states in Revelation 21, with the arrival of the New Jerusalem.

So, we have two concepts here: the life death and resurrection of Jesus Christ in our past and the anticipation of His return and the consummation of God’s creation in the future. We are living in between these amazing events.  How we live and what all this means for how we conduct our affairs is the point of this blog.  Now many have unfortunately used this tension as a pretext for superficial doctrines like the prosperity gospel.  Their idea is that the Kingdom is in full operation and that we can make it breakthrough fully into our world (as if God is on our timetable!)  This is warped into the notion that people never need be sick or poor because the riches of the Kingdom are available to them right now.  This is not the post to debunk this hoary notion.  Let it be enough to state that there is no teaching in Scripture that can justify this.

The really important lesson for us is that we do not need to wait to live out our Kingdom call.  In fact, Jesus never wants us to wait to follow Him.  Everyone Jesus calls is called RIGHT NOW.  He knows that delay is true death and we are to live and love unconditionally beginning immediately.  We do know that it is frustrating to live in this fallen world with all that is wrong with it and that gives rise to the need for perseverance in our faith.  The lesson is live faithfully and be ready for we know not the hour in which He comes.

The other thing about pondering this tension between the already and the not yet is that it can give us perseverance by way of hope.  Our victory has already been won, the battle is over.  God already stands victorious over all Creation.  Some logic can, I think, help here.  Since God is eternal, He stands outside of time.  That is what eternity is, that place that is outside of time.  This is logical because since God created everything He must stand outside of time as He created time itself.  So, when we enter into eternity with God, we also will be held by God outside of time. Since all this is outside of time, we are already there.  We are already at the feast and enjoying the banquet, we just can’t see it clearly from this Earthly perspective.  We will literally step into eternity at the same time.  As my former Pastor used to say, we are all getting there at the same time, so this is not a party we can be late for.  The best popular expression of this is the notion of the Nexus from Star Trek: Generations.  I don’t know about you, but this train of thought strikes me as so cool as to give you goosebumps on a July afternoon.

What is so cool about it is that this thought can carry us through some truly dark moments.  No matter how bad things get on planet Earth, and they can get pretty damn bad, God will bring us home and in fact, He already has.  This is a belief to hold onto when contemplating what a mess we have made of His world.

So, it is entirely appropriate that we come to Advent with joyous anticipation and a sense of renewal at the commemoration of the birth of Jesus Christ.  Just remember that this is a commemoration of a past event that celebrates God’s gift of grace to the world.  This is a gift that is with us still, in the hearts of all His followers. In our hearts also, is the faith that we already stand victorious with our Lord in eternity.  Don’t wait another moment to live in that Kingdom.