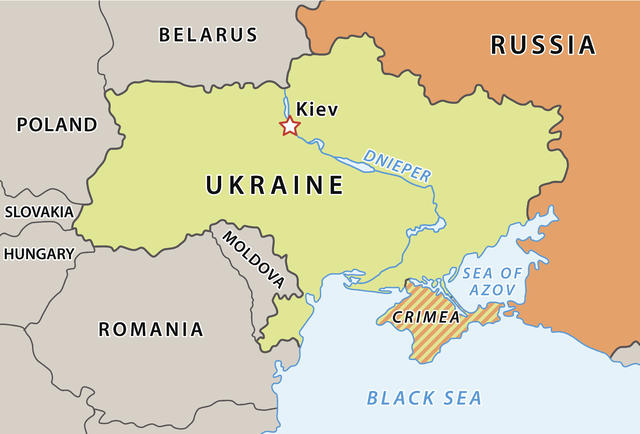 Do Not Believe Any Official Statements

It should go without saying, but never trust official government statements regarding…anything…ever. There is always an underlying reason, and that rationale is usually discoverable. However, that rationale will almost always be different than the official line. This rule is certainly operable today regarding the Russian-United States standoff in the Ukraine.

If there is one area of life that does not warrant us and them thinking it is foreign policy. It is invariably the case that all parties involved are acting in patently immoral ways. The situation over the Ukraine is no different. Let’s start with the Russian position. While it’s true the eastern part of Ukraine is heavily Russian speaking and the Russians may have a cultural and linguistic affinity with many in the country, that is not their primary goal.

First, Russia is a regional hegemon. They are the strongest military in this area and like all such powers they wish to exercise political, military, and economic predominance. That means they either directly control, or more inexpensively, have a client state in power, that will do their bidding. They had such a government under the leadership of Viktor Yanukovych until 2014. Yanukovych, and previous Ukrainian governments had made overtures to a closer economic relationship with the European Union and therefore the United States. This would have interfered with the favorable trade relations that the Russians had in place with Ukraine. Yanukovych called off these negotiations and kept in place the arrangements with Russia. Protests broke out and, long story short, the Russians backed Yanukovych and the United States backed the protestors and they were able to oust the Russian backed government. A Russian client state had been turned into a U.S. client state.

The problematic part of all this is that in addition to regional dominance Russia has a deep fear of encirclement by the West. Three times in the previous 200 hundred years Russia has suffered massive land invasion from the West via Eastern Europe. It made Russia paranoid enough when previous Soviet satellites Poland and the Baltic states joined NATO. This was in contradiction to a promise the U.S. made not to put NATO up to the Russian border. But to have Ukraine drift that way is for Russia an intolerable situation. Compare that to the way the United States reacted in 1917 to German machinations in Mexico. Like it or not this is a core interest for the Russians the same way Mexico is for the United States.

The U.S. for its part wants to poke the Russians and make life difficult for them politically. The U.S. and Europe also want closer economic ties to Ukraine and more favorable trade arrangements. They wanted the Ukraine in the Western economic and political orbit for the same reasons the Russians wanted them in theirs. It is simply an age-old case of two powers competing for control of the same piece of real estate.

One more thing to keep in mind; neither side cares much about protecting Ukrainian civil rights and economic liberties. The Ukrainian governments prior to the western stage-managed coup in 2014 were hardly paragons of virtue. The governments since 2014 are hardly better. Remember it was the pro-U.S. government that was getting all sleazy with then Vice President Biden’s son Hunter. There is more than enough corruption to go around.

I have often been critical of U.S. foreign policy when there are no existential risks involved. I mean was Afghanistan, Iraq, or even Vietnam an existential threat to the United States? In this situation we are playing a dangerous game with an adversary that really is an existential threat. Yes, Russia’s economy is no bigger than Italy’s but they, like the U.S. have enough nukes to make the rubble bounce multiple times. A miscalculation could send the world into the cataclysm that we barely escaped during the Cold War.

The reality is that we cannot keep Ukraine “free” (defined as in the U.S. orbit) absent a general war. We simply cannot project that much force across that much distance to do so, while Russia, being next door can do so. We know this, which is why it is incomprehensible that the U.S. would risk such a tragic miscalculation over an unobtainable end.

Equally incomprehensible is the notion that Ukraine is in any way a key area for the U.S. Even using a patently immoral imperial interest standard it is not worth risking general war. It does not pass the smell test for a heathen just war standard much less a true Christian analysis. It simply is not worth it to the U.S. Again, the comparison to Mexico is relevant. Think about how the U.S. would react to a pro-Russian government in Mexico City and modern offensive Russian weapons in the hands of said government. We almost came to nuclear blows over a less consequential Soviet presence In Cuba in 1962.

If Not Peace, then How About Harm Reduction

Yes, Russia is wrong to seek such control over Ukraine, but so is the U.S. There is no good policy to be found here. In these situations, the best we can hope for is harm reduction. The way to reduce the harm here and the risk of global catastrophe is to recognize Russian preeminence over this area, the way the Russians have ceded the Western Hemisphere to the U.S.

It is not a heavy lift to give the Russians the assurance that Ukraine will not join NATO. It is past time to disband NATO altogether as I argued awhile back. Remember NATO was formed before the Warsaw Pact and has survived that defunct organization by over 30 Years. Why continue to provoke a paranoid nuclear power like this for zero imperial gain and a correspondingly massive risk. This policy change just might encourage Russia to give Ukraine a bit more breathing space to chart its own path forward. At the same time, we can use a calmer international situation to build genuine, sustainable economic ties to Russia.

Is any of this perfect. No. I am not sure it even qualifies as moral; no governmental action ever does. It recognizes an excremental situation, namely the existence of imperial hegemony. However, the sane recognition of what already exists lowers the temperature and backs the world away from a cataclysmic mistake. This creates a space for more forward-thinking voluntary associations to spring up on all sides. It genuinely represents some real harm reduction. In a fallen, sinful world, harm reduction that spares the world an unintended nuclear holocaust might just be the best we can hope for.