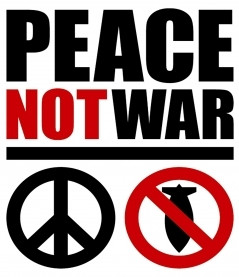 Lent being a time of repentance and returning to the Lord we must always look in the mirror first to discover the many ways we can turn from our sin more fully toward God.  However, the fact remains that we are also social creatures who live in community.  Because of this we must also ask, what are we as a community called to do, and in what ways can we help our brothers and sisters turn more fully toward God?

To that end I will state that at a minimum there must be no Christians in the military.  Let’s set aside for the moment the question of whether there should be Christians in any service to the state (I do not) and focus on just the most egregious example of state service; the armed forces.  This recognizes that the issues of war and peace are primary.  The military is also the most visible world-wide manifestation of the U.S. empire and sadly the way most non-Americans experience and interact with the United States.

So why is military service proscribed to the Christian conscience? Flatly, because the Christian ethic is a pacifist one.  First, Jesus never in his life acted violently and never taught that violence was ever acceptable.  Second, the Apostles never acted in a way that was violent and never taught that violence was ever acceptable.  Third, nowhere in the New Testament is sanction given for violence to be perpetrated by anyone ever.  Actually, the first point is reason enough.  Jesus is our exemplar and our template for how to live a fully human life, we really need look no further than this.

That Jesus is the alpha and the omega of our earthly life cannot be seriously questioned by anyone claiming to be one of His followers.  I have made this point before.  Even if some will admit that Jesus was a pacifist, they usually offer two main objections to this being applicable to us in our earthly faith walk.  I call these two objections the “too high” and the “too far” objections.

The too high refers to the idea that Jesus’ ethic belongs to some heavenly realm that is really just an aspiration but that does not really apply to us way down here on earth.  This is nonsense.  Jesus time and again demands that we follow God’s commandments here on earth.  In the Lord’s Prayer it could not be clearer: “thy will be done on earth as it is in heaven”. He fully intends for God’s Kingdom to break into this world.

The “too far” objection claims that Jesus’ ethic will reign sometime in the distant future when He comes again.  Until then we don’t really have to precisely imitate Jesus, it is alright if we defer until that far distant time of His second arrival.  This too is nonsense.  Jesus again and again demands that those who are called follow Him RIGHT NOW. This was true when He called the twelve, it was true of the rich man, even to the point of letting his father molder dead in the field (Matt 8:22) rather than delay the call of Jesus.  We are never called to wait.  This alone might be enough for us to reject military service as the military is famous for hurrying up then waiting.

There are those who will offer more nuanced objections than these easily defeated excuses.  Many will point to the instances of violence occurring in the Old Testament.  I am not rejecting the Old Testament, but I am stating that it is either interpreted as revealing Christ or it has been superseded by the New Testament.  Jesus goes out of His way to reject in a unique manner the violence in the Old Testament.  Jesus pointedly rejects the crowd’s demand for violence during the Passion Week, to the point where they desert Him.  He refuses to ride into Jerusalem on a warrior horse but instead chooses a donkey. He, of course offered no resistance in the garden when they finally came for Him.  This is the life Jesus lived and the death He suffered, this must be our ideal.  If Christ did not come to earth to show us how to live as God intended, then why did He come at all?  Much of this perspective can be found in chapters 4 & 6 of War and the Gospel.

Then there are those that would try to parse the Ten Commandments to justify violence.  They will try to claim that the prohibition is against murder not killing.  There is serious reason to doubt this and a strong case to be made that the 20th. Century change in translation from kill to murder (except notably by Roman Catholics) was a cave in to the needs of the state.  Even if the commandment is “Though Shalt Not Murder”, so what? For one thing, there are parts of the Old testament in which we have accepted a changed meaning.  The prohibition against adultery clearly did not in the Old Testament prohibit polygamy, but we understand it to do so now, in light of the teachings of Jesus.  We have the lived example of Jesus, which is where our focus should be.  Another example of Christ demanding a higher standard of adherence to the Decalogue than the mere letter of the law would indicate is when He counsels that “heart murders” are a violation of this commandment or lust a violation of the prohibition against adultery.  In fact, to ignore Jesus’s teachings regarding violence (and anything else for that matter) is to separate ourselves from the morality of the Gospel, never a place Christians want to find themselves.

So, if we have a Jesus and His immediate followers who never lived or taught violence (and as well the early church fathers) and we have a clear Scriptural injunction against killing and an immediate call to foster the inbreaking of God’s Kingdom here on earth, where does that leave military service?  It leaves it in Gehenna.  We, as followers and would be imitators of Christ cannot accept service in an institution that regularly, if not ritualistically, practices great violence against our fellow children of God.  To lay hands on another human being is to lay hands on Christ Himself as we are made in the image of God.  To acquiesce in our fellow Christians acceptance of this abomination is to make ourselves as guilty as they in ignoring the Gospel.  As Luke 12:47-48 says: those who know and do not are in a very tough spot indeed.

At a minimum we must vocally reject any Christian participation in the military.  Further I would suggest we encourage any fellow followers of Christ to leave the military as soon as possible.  There are resources out there that offer advice on getting out.  Years ago, I met someone who stated that since he swore to uphold the constitution against all enemies, foreign and domestic, he had to state clearly that he considered the U.S. government a domestic enemy of the constitution.  You should have seen how fast they processed his resignation!  Any help we can offer is meaningful.  Prayer, financial assistance, legal help, it is all worthy.  It may very well be a large cross for someone to bear to pay the price for leaving the military early, but we must encourage our fellow Christians to do just that.  Anything less results in turning our backs on the Cross.