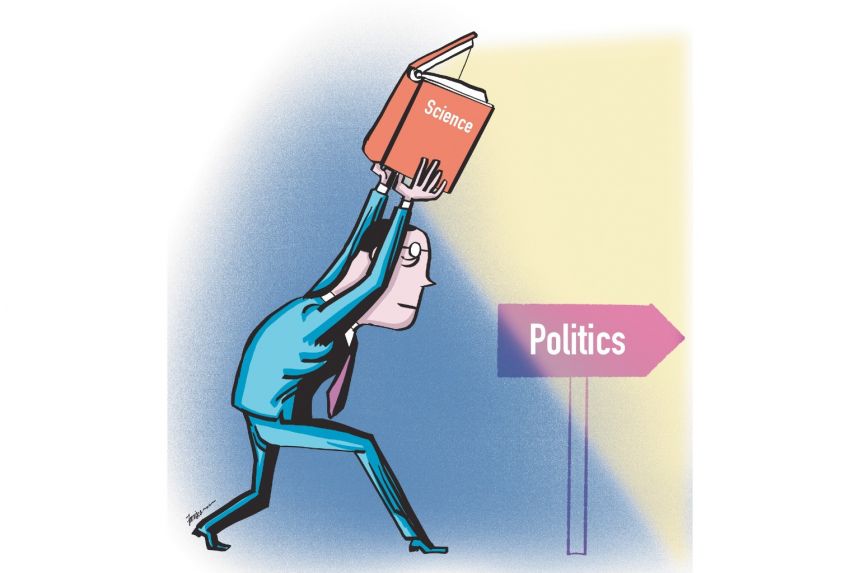 In a long-ago book a political scientist named Scott Gordon argued that knowledge functions as a complement to liberty only when it is widely disseminated. He offers examples of when this has not been the case. Tribal priests who used eclipses to dazzle the uninformed. The Pythagoreans who used mathematics to the same effect as well as the Comteans who used science in France to exercise influence. Gordon’s argument is that science today is too complex to be widely disseminated and is therefore a threat to liberty. He fears the rise of a new scientific priesthood with political power. The response to many who are persuaded by this line of thinking is to urge “democratic control” over science to safeguard freedom.

The question then becomes “is this necessarily true?” It strikes me that science was always beyond the grasp of the masses. It has always been the specialty of the few. Science has always had a bit of a religious veneer. Scientific knowledge in the examples that Mr. Gordon uses was a detriment to liberty because political power over others was nearly complete. The societies that were under the influence of tribal priests or mathematicians were societies that were also under the control of a power elite. The rise of the era in which Mr. Gordon sees scientific knowledge widely dispersed to the benefit of many coincided with the limiting of political power and the unleashing of productive forces that sent humanity on a

massive upward thrust. What occurred was not so much an increased scientific understanding by a largely unscientific populace but a greatly limited capacity of the power structure to control society.

This had the effect of pushing scientific knowledge out to those who could put it to effective use, entrepreneurs, investors and business operators. The masses never did have a deep understanding of these things, but they did not need to. Science was used to improve the economy and society for all because it was allowed to. This is what a free market produces. Scientific knowledge was disseminated to the extent that it was necessary to produce advances in economic outcomes. It was, contra to Mr. Gordon’s argument, not necessary to put it under “democratic control” (this being a mirage anyway), but to keep the knowledge out of the sole hand of the government. It is sound economic theory and good history to observe that the more decentralized the power, the more useful information becomes (whether the masses understand) and the more wealth society creates.

The problems started not with scientific knowledge becoming concentrated and unavailable to the masses, as it has always been thus. The problems began with the rise in governmental power. The so-called Progressive Era in the early 20th century accelerated trends that had been developing in the last half of the 19th century. Interests rose that wanted government intervention for a variety of reasons. A good outline of this history can be found here. This concentration of control was visible in the rise of patents to create monopolies of scientific inventions (these not actually being needed). It was also seen in the rise of medical schools to concentrate medical knowledge in the hands of a few and stave off competition for medical services via laws of licensure and accreditation (these regulations also being unnecessary). We saw a massive movement of the federal government to control higher education via student loans, grants to universities and general control of the direction of research. In short, the government took control of major portions of scientific knowledge and put it to its own ends and not that of the economy or society at large.

The outcome of all of this has been deleterious for the economy and society. More state control of scientific knowledge has resulted in greater state control of the economy. This has put the government firmly on the side of the elite that has access to governmental power and privilege. This has clearly put the scientific community at the disposal of the warfare state with all its attendant violence and immorality. It has created and accelerated a situation of increasing inequality and a credentialism that damages those at the bottom of the economic and social pyramid. This has created more erratic economic growth, a stagnation of median real income and ever greater booms and busts. Additionally, this creates a negative feedback loop that degrades science itself. Science is no longer evaluated on its own merits for accuracy and effectiveness but rather by a political standard, which often has little to do with truth.

The pandemic response is a perfect example of this. “Follow the science” became the mantra. “The science” of course defined as what the government “experts” said it was. Any dissent was disparaged, shamed and under great state pressure largely excised from public discussion. The decision was made early on that the only concern was for people who might get Covid-19, regardless of the costs to the rest of society (never mind how unethical this viewpoint is). Also pushed aside was the clear skepticism that science previously had for the efficacy of so-called non-pharmaceutical interventions. The need of the state and its clients to increase power put science at the disposal of the power structure not in the pursuit of truth. This does not mean that different perspectives have not gotten out, but it has been an uphill climb to say the least and this perspective has had precious little impact on overall policy and where different policies have produced better outcomes the “experts” give patently ridiculous explanations. The non-governmental control of science and the responses to the pandemic would have produced a much more balanced response than the top down ignorance in charge this past year.

So, what is the best response for people not willing to let the state take control of their lives via control of scientific information? First, look for contrary sources of scientific and medical information. Those sources are still out there. Always keep in mind that there is no such thing as “the science” (defined as the majority), there is only science, which is made up of people who disagree with one another. Every scientific advance has been produced by someone rejecting the majority and postulating a different theory. Think Einstein, Newton, Galileo, Copernicus and Kepler for starters. Seek out the dissenters and if it makes sense to you then proceed with that as your knowledge base.

At the same time, we need to push back against state control of science and knowledge. We need a radical deregulation of the economy and society. Not some trimming around the edge’s deregulation but wholesale dismantling of the regulatory apparatus. First to go should be any licensing requirements of any media whatsoever. The ever-present threat of licensing is a detriment of the free flow of knowledge necessary for information to get to where it needs to be. Also, eliminating even the threat of regulation will take away the power of the state to censor. We have seen lately that just the threat of making social media companies common carriers has gotten them to toe the line with what the government wants. Absent this regulation social media companies can be held to their Terms of Service agreements, and this can be enforced via contract and tort law, which while not perfect, stands to produce much better outcomes than a regulated environment. Along with this we should push for the elimination of all local cable monopiles that have done much to choke the flow of information and needlessly raise costs and dimmish service.

It should be obvious that we also need to remove government from all scientific research and development. many, even conservatives, will scream that this will damage the future of the economy. This is blatant advantage seeking by those unwilling to pay the full costs of research that will solely benefit connected corporations. It’s not like we don’t have examples of privately funded basic research. While we are at it, let’s get rid of patent protections as well. They are nothing but government created monopolies lacking any basis in moral theory and any demonstrated economic need. The other key policy we can implement is to enact truly free trade, unilaterally if needed. The benefits are legion as I pointed out here and here.

In the end, the only prudent policy is to radically reduce or better yet eliminate the government. Returning to the principles that founded Western Civilization and this time expanding them to everyone will move our society and economy toward the ability to more widely and sustainably produce wealth that benefits a much wider range of our brothers and sisters. People in their day-to-day life will still be largely ignorant of all the science around them but there is no harm in that as long as the political power does not exist to use science for the ends of a parasitical governing class rather than society at large. We as a society can do better than turning over significant chunks of knowledge to the control of the government and we as Christians should lead the way in demanding a dispersal of power and science back into the hands of a free people, the way God always intended.