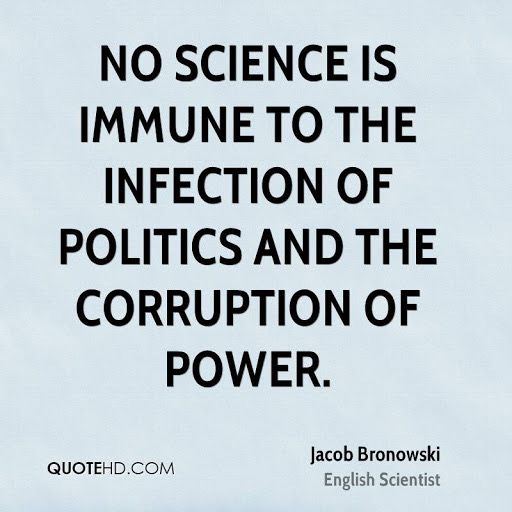 There is a great deal of pollution occurring in our world today, and I don’t mean pollution of natural resources. I mean that we have allowed the stream of knowledge that is at the heart of all modern societies to become polluted with ideology. This pollution has occurred because of the growth of governmental interference in just about every aspect of our society and economy. It is the government that is the largest funder of research and development. The government is the main conduit for scientific study, policy research and academic activity.

The problem with this is that government action necessarily means a political dynamic. Politics is by definition a win lose scenario. Whether by majority vote or bureaucratic decree there is a winner and a loser. The loser has the depressing choice to either submit, fight or flee. All of this is in contrast to the win-win scenario that is at the center of voluntary market transactions.

There are two main problems with this. First, there is the fact that governments are poor allocators of scarce resources. This is so, not because they are necessarily malevolent but because they are not in a position to get, have or usefully employ the correct information. This information must be communicated via freely formed prices. Second, the government’s criteria of success are not accuracy or usefulness but whether or not a political constituency is satisfied. It does not matter to a political actor if the policy in question is rational or not or whether it produces the best quality of goods at the best price; goods that consumers actually want.

The pollution I am discussing occurs largely because of the second damaging effect of governmental action. A symbiotic, if not incestuous relationship has emerged between the scientific and academic community and the government. The academic and scientific community needs resources, whether or not they produce anything usable and the government needs “intellectual” cover to extend their control over society.

This is certainly true in the field of economics. Ever since the days of Keynes, economists have become little more than mouthpieces to justify expanding governmental control and institute a range of polices that damage the economy on the whole but unrighteously enrich the politically connected. This is also true in the field of the natural sciences. The government has forcibly allocated huge amounts of resources to the “defense” budget and other military programs both here and abroad. No market participant needs weapons that can kill millions, they need things that people can actually use. That is harder to design. It is much easier to secure a nice taxpayer provided existence making weapons of mass destruction.

The problem arises when the needs of the government run into the need for accurate, usable data. We have seen a lot of this conflict during this recent pandemic. I do not wish to rehash what I have discussed here, here, here and here. It is enough to recognize that the government has screwed the pooch repeatedly but all the while getting “cover” from “scientists” who continually advocate more government control and arbitrary polices. The facts don’t matter. It is not important whether the pseudo scientists are right or not. All that matters are that they speak for the government and who would expect otherwise; it is the government that is writing their paychecks.

The most extreme form of this phenomenon was the case of Trofim Lysenko, who was a Soviet scientist. He advocated a “socialist science” that was supposedly true to the Marxist ideals of the revolution. The problem was, it was incoherent science. He denied entirely the discipline of genetics and inherited traits. He, however, had Stalin’s ear and used his position to purge the Soviet academy of all those who opposed him. These were real purges; some were sentenced to death, others left destitute, others forced to flee. His efforts put the Soviet Union decades behind the rest of the world in this area.

This is obviously an extreme example. Yet, we can see echoes of this mentality in the way those outside the mainstream are treated by the scientific and academic “cancel” culture. If you are not among the “in” crowd, then those that control these fields will deny you tenure or force you from your position or the government will deny you grants and contracts, which are the lifeblood of these fields today. The political nature of the funding and organization of science today will always make political kowtowing not accuracy the measure of success. It is undeniably true that all scientific progress has pitted an individual who stood opposed to the scientific majority. This occurred all throughout history from the ancient world through Copernicus, to Galileo to Einstein. The key is getting these individuals out from under the majority so that their theories can be put to an actual scientific test. This is ever so much harder when government is footing the bill.

The only real solution is to separate politics from knowledge and science. If we allow a free market in research, discovery, application and invention then we will produce better results. These results will be based upon what is accurate not what is popular. Yes, mistakes will still occur but with a built-in incentive to identify and correct those mistakes sooner rather than later. The same holds true in the academy. If economists had to offer a product that conformed to reality rather than one that justified government activity, then things would look quite a bit different. The illogic of things like Modern Monetary Theory or other silly notions like magic money multipliers and so on would disappear quickly. Like a bankrupt business that the government keeps afloat with cheap credit, these intellectually bankrupt charlatans would actually have to produce something positive for a living. As with all things a free and open society is a much better path to prosperity. Let’s endeavor to free up the market for information and science and thereby clean up the polluted cesspool we have made of the knowledge stream.