Only God’s Court Is Supreme 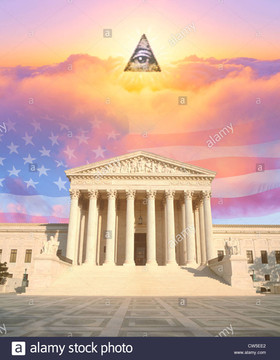 In the wake of the Brett Kavanaugh nomination fiasco many commentators on both the right    and the left have bemoaned the fact that this sordid episode may leave the court diminished,  that this partisan rancor over the seating of Kavanaugh may bring the court into disrepute and lower its esteem and legitimacy in the eyes of the populace.  I can only hope so.

The court is a bogus unaccountable appendage of an over preening state that acts as an additional legislature, albeit one with life tenure, and consistently works to aggrandize the power of the government.  The court has shrouded itself in mystique.  A mystique with not a little bit of religious imagery.  These high priests of “justice” sit in their cloistered temple dispensing wisdom from on high in oracular fashion.  They do all of this while dressed in robes as would be befitting members of a religious order.  Their deliberations are secret and their pronouncements made with much pomp and circumstance.  It is as though they are moving about their temple like high priests of Melchizedek. It all strikes me as blasphemous.

That this body works on behalf of the growth of government at the expense of individual rights cannot be gainsaid.  Many decry what they see as judicial activism but the reality is the court is mostly inert. From 1954 to 2002 15,817 laws were passed by Congress, the court struck down just 103, two-thirds of one percent. Over the same period state legislatures passed 1,006,649 laws and the court struck down 452 or less than on twentieth of one percent. Between 1986 to 2006 the federal government adopted 21,462 regulations and the court struck down 121 or about a half of a percent.  In any given year the court strikes down just three of every 5000 laws passed by Congress and state legislatures.  They are not much on overturning their own precedents either as it did so in just two percent of the cases it considered from 1954 to 2010.  The full story of this can be found here.

There is an argument to be made, which I think is powerful, that the court arrogated to itself the power of judicial review, even though no such grant of authority is made explicit in the constitution.  One can cogently argue that the other two branches of government have at least as much authority to review the constitutionality of government actions as the court.  None of this matters though in light of the statistics cited above.  The court rarely overturns government actions at either the federal or state level, it is really just a useful tool of statists of every party. Its main purpose is to ratify what the other branches and levels of government have decided to do.  True enough they occasionally overturn laws and set boundaries, but not often.  To be fair they have from time to time admirably protected individual rights such as the free speech right to burn the flag or extending rights of privacy to deeply personal consensual activities.  However, for every one of these cases there are lots more along the lines of Korematsu or Dred Scott that eviscerated individual rights. Those, along with the rulings that validated almost everything the federal government did from the New Deal to the Affordable Care Act, mark the Supreme Court as a partner in crime with the other two branches of the federal government.

The Supreme Court is not there to put guardrails on either the federal or state governments.  They are there to provide the trappings of legal legitimacy to an ever more powerful government.  The argument can always be made that such and such a law has passed Supreme Court muster.  If the court validated it or at least did not rule against it, then it must be constitutional and by implication a good idea.  Further, the court with all its “mystical” trappings provides an air of religiosity to all of this.  The temple-like building, the robes, the inscrutable language and the stiff proceedings are intentional and designed to further the worshipful obeisance of the population.  What could cement the vast intrusion of the government upon our lives more than a religious blessing from the high priests of the parasitical class.

All of this, is of course, blasphemy.  I need not rehash all the reasons why government is incompatible with the Gospel.  Suffice it to say for our purposes here that the jig is up when you consider all the religious trappings that surround this entity.  We are to serve only God and we know in our hearts what that means and how we are to treat one another.  We should recoil at the monstrous actions that our (and every other) government perform.  We should see that an ever more powerful government needs worshipful reverence of the kind we should only give to God.  Leave these acts of ritual defilement to the heathens, we must rule against the United States Supreme Court as having no jurisdiction on our hearts and none on our lives, save that which they can compel with force.  The only court in the universe that is Supreme is God’s and we shall all be in that court one day, all the others are irrelevant. If this Kavanaugh business brings disrepute and shame upon a disreputable and shameful faux court, then, Amen.