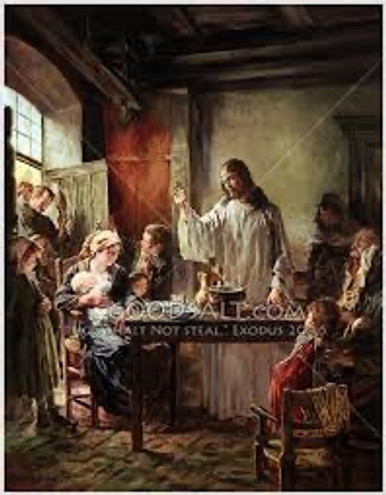 As we find Christmas nearly upon us it is helpful to examine the birth story to see what it can teach us.  It is striking to note that only two of the four Gospels even detail the birth story at all, and they are quite different in their narratives.  So, perhaps we make too much of this, but the story is so familiar that we should examine it to see what is says to us after a couple of millennia.  What it says clearly is that this birth heralds a movement of the lowly, by the lowly, for the lowly.

In this week’s text (Matt 1:18-25) we find Mary pregnant with Jesus, while not being  married to Joseph.  That Mary was chosen in the first place speaks to God’s continual choosing of those least among us.  To pick out a heretofore unheralded peasant girl in the first place is surprising to say the least.  That this peasant girl ends up as an unwed mother to be, is not just surprising but, given the context of the time, downright dangerous.  This is about as lowly a person to be the Mother of God as you could find.

Joseph is not of much higher status in this society.  True enough he is a carpenter which puts him above the poorest of the poor, but not by much.  As a male he certainly has advantages that women in this culture did not.  As a man he has the right to dismiss this woman, even though engaged.  Joseph is on solid legal ground as she is carrying a child that is not his.  In fact, that is his plan, although he seems gracious enough by the standards of the day to do it quietly.  This would of course leave Mary in a precarious and dangerous position as she would be without even the protection of a husband.

All of this turns around as God calls to Joseph to stay with Mary, be faithful to her and accept God’s will for both of their lives.  God offers to Joseph a glimpse of what is in store as He informs Joseph that this child will do nothing less than “save his people from their sins”.  Joseph, like Mary before accepts God’s call for his life and does as God requests.  These two lowly unexpected servants of God then go about being part of the greatest gift God ever gave humanity and beginning a process that will change the world.  So much change that this becomes the central event in human history.  Don’t let the heathens obfuscate this truth.  You only need remind them that like it or not; believe or not; the world marks time from the birth of Jesus Christ.

So, what does the beginnings of this story tell us about what we are called to do today.  First, that God continually picks unexpected and outcast people to carry His message.  Whether it be Moses, who cast himself out from the heights of Egyptian society, or the meek shepherd David who became a great leader or the 12 that Jesus chose from the margins of Jewish society to Paul who cast himself out of “respectable” Jewish society to proclaim the Gospel of Christ.  Scripture is filled with too many examples to list, but most everybody on this list is a lowly outsider.  The upshot for us today, is that no matter how lowly or unworthy you may think yourself; you absolutely have a part to play in spreading the Good News.  It may simply be in living out your call in a quiet, humble manner without seeking a spotlight but nonetheless all of us are important in getting out God’s message.  Joseph offers us an outstanding example of quietly living out one’s faith.

Second, this message and ministry is to be directed at the lowly.  The Good News is primarily needed for those who have given up hope that there is any good news left to hear.  Those on the margins of society; the poor, the lonely, the ill, the imprisoned, those drowning in unbelief and despair are our mission field.  Doing unto the least of these is doing unto God Himself as we are taught in Matthew 25: 35-40.  Those whom society has forsaken, oppressed and forgotten are to be our primary concern.  Note, this is not our sole concern, as God loves everyone.  These are to be our first concern, though, because we, as Jesus lived and taught are to be most compassionate toward those with the least.

So, what if we are not lowly.  That encompasses a vast majority of people in the West, who by historical standards have unimaginable wealth.  Well, vast material wealth is not the same thing as possessing that which God wants most; a relationship with us.  Additionally, we can be blinded as to the actual amount of material suffering that occurs in even a nation as wealthy as the United States.  In any event there is not a conflict with seeking the uplift of people in this nation as well as other parts of the world.  The solution is the same; to love one another the way God loves us.

If, however, we find ourselves not particularly lowly, then that simply means that we have a greater responsibility.  To those whom much has been given, much will be required. (Luke 12:48).  Whether that is spiritual gifts, material gifts or a particular skill or talent.  If you have an abundance of these things, then there is no question you should put these gifts to use on God’s behalf.  How shameful to do otherwise.  As has been made clear we know to whom to direct these efforts.

So, this Christmas let’s endeavor to renew our commitment to our Lord and Savior by remembering how this all started; as a movement of the lowly, by the lowly, for the lowly.  This should help in giving us the focus to effectively bear true witness to God’s redeeming word and bring more people into full relationship with God.  That’s a Christmas gift that keeps on giving… eternally as a matter of fact.