Of Saints, Sinners and Transparency 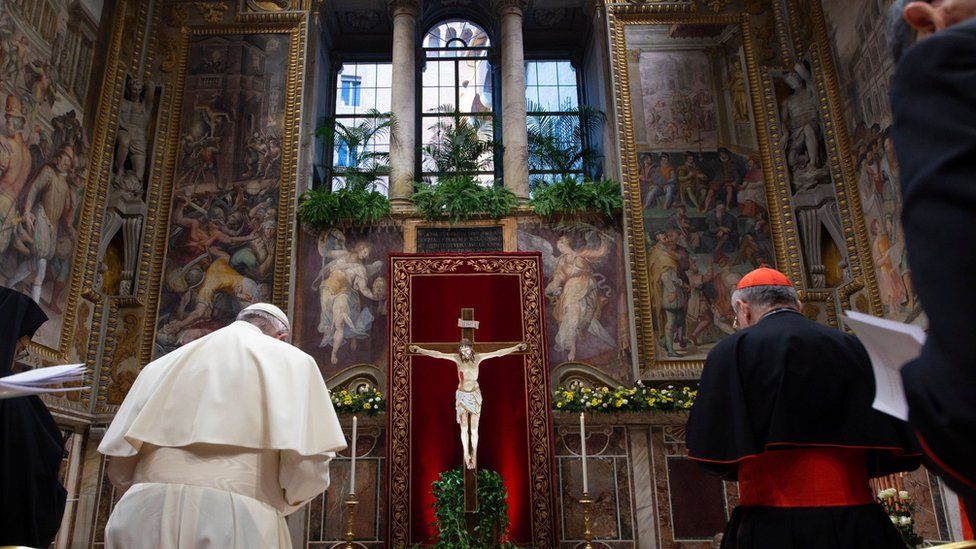 The release this week of a report detailing some of the Vatican’s response to the clerical sex abuse scandals has brought renewed attention upon the Roman Catholic Church and specifically Pope, now Saint John Paul II. As someone that was born, baptized, raised and educated a Roman Catholic, this is a painful subject to discuss. This is the case not because I was abused or even personally knew anyone that was. It is painful because of a conflicted relationship with the church, or perhaps because of the appearance of a conflicted relationship with the church.

I never wanted to be identified as a “former Catholic”. You know the kind that became so burned out from the church, for whatever reason, that they now define themselves by what they are not or what they are against. It has always struck me as sad that there are people who are so angry at their experience that they fall into this group. I am not denying the reality or validity of their emotions, just that it strikes me as depressing that there are so many in this group. It would behoove the Catholic Church to recognize that the existence of so many who fall into this cohort presents a challenge that should be addressed.

I also don’t want to present myself as someone who is existentially at odds with the church. Yes, I confess my faith in the Lutheran tradition now, and yes, I do have theological difference with Roman Catholicism. Yet, this should not be taken as an anti-Catholic sentiment. I cannot deny that I was granted the grace of God through Christ in the Catholic tradition, nor that much of my personal narrative is bound up in the Catholic tradition. I would be denying myself to claim otherwise. At the same time, I recognize the millions of the faithful (and not a small number of my personal friends) who confess in this tradition who are as loved by God as any in this world. I also recognize and lift up the vast majority of Catholic clerics who are performing great ministry; proclaiming the Gospel and administering the sacraments as well as performing great acts of service in Jesus’ name. Also, one cannot be a Christian without acknowledging the great body of amazing scholarship that so many Catholics have produced over 2000+ years.

That being said, it should be obvious to all that the Catholic church has a serious problem regarding the sex abuse scandal. This report was, in many ways, a good step in the right direction. It moves forward in being more transparent in acknowledging some of the wrongdoing of the highest levels of Catholic leadership. This brings us to the case of John Paul II. There is no doubt that he was one of the most consequential Popes in Catholic history, clearly the most impactful in the 20th. century. I personally can attest to this as his trip to the Holy Land in 2000 was so impactful to me in my return to the faith. The sight of this bent over old man retracing the steps of our Lord remains a powerful symbol of faith and humility.

Yet, it is painfully clear by this report, and something I have long suspected, that John Paul II was massively negligent in addressing this issue. He was time and again faced with credible reports from well-placed individuals that there were real abuses going on at very high levels. This report specifically addresses the issue of then Cardinal McCarrick. One of these sources was John Cardinal O’Connor, then archbishop of New York; it was not like John Paul II was hearing from some backwater priest from Podunk. Yet, time and again John Paul refused to believe the reports. It is not really important to know what he literally knew but to know what he reasonably should have known. Using a reasonable man standard John Paul II stands in not good stead regarding the care of the faithful. This was not just true regarding McCarrick but also true of reports coming out of Ireland (Sinead O’Connor is still waiting for her apology) as well as Latin America.

All of this narrative is advanced in this most recent report. Yet, some of the same problems are seen in the framing of the discussion. Yes, they threw, a dead Pope under the historical bus, but left unscathed the two living Popes; Benedict and Francis. Both of these individuals have the same things to answer for as John Paul II. They reasonably should have known that there were large-scale systemic problems occurring in the church, yet they turned a blind eye to them. The fact that these two are insulated in this report tells me that the church has not learned the central lesson from this; that even current leaders must be held to account. It is very easy to paste the dead with recriminations but how transparent are you really being if you will not acknowledge the shortcomings of the current power holders? Indeed, if they were really holding themselves to account, they would open a discussion of removing John Paul’s sainthood. However, because it was Francis who finished the canonization, he would be blaming himself, not something Francis appears comfortable doing.

None of this is meant to castigate the Catholic Church. It is to remind that in order for there to be true healing and growth, there must be honesty and transparency. It is beyond sinful if the faithful allowed this to turn people from the Gospel. It is like a 12-step program; step one is admitting that there is a problem. Unless and until the current church leadership holds itself to account there can be no real admission of a problem and no real healing. The victims (nuns are next to be widely revealed as victimized) are crying out, not simply for some monetary compensation but more critically for a simple elocution of the crimes committed. They desperately need to be heard and to be recognized as actual human beings made in God’s image and this manifestly cannot happen until the church speaks honestly about what was done to them and by whom. So, while this is a good step, it is not nearly enough.

Also, this critique is not meant to call anyone out about remaining a Catholic. Yes, I confess in a different tradition; that is where God called me. Many are called by God to remain in the Catholic fold and confess in that tradition. I celebrate that. If that is where you are called by God to be then that is where you better stay. I would only encourage those so called to recognize that there is a problem (as those in other denominations should as well) and to work for change, starting with transparency. Break open those stain glassed windows, knock down those heavy wooden doors and let some fresh air into that august institution. Fight for that tradition; she is still worth fighting for. There is no doubt in my mind that the Christian faith is much better served and proclaimed with a vibrant and renewed Church of Rome. All of Christ’s church must stand with Catholics in the endeavor.