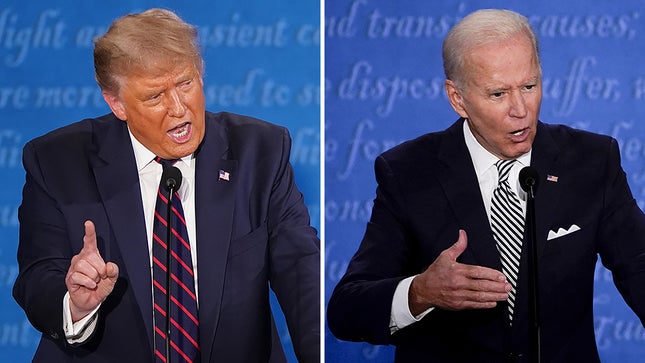 It appears now that Donald Trump will not be participating in the next debate, which The Commission for Presidential Debates has mandated be virtual and not in person. This is unfortunate. Yes, the first debate was, as in the words of CNNs Dana Bash, a shitshow, but that is a healthy thing for the American people to see.

These spectacles show the nature of both candidates and strip the veneer of decency from each. These debates serve to show how little difference there is between the two major candidates. They are both willing and eager to throw gobs of other people’s money at their favored clients. They both desire to extend the power of the state to control vast swaths of our lives and economy. Sure, they have some differing constituencies, but the end result is the same; government grows and liberty withers. The extreme nature of the vitriol both Trump and Biden spew at one another just shows how high the stakes are and the lengths that each is willing to go to in order to secure power for themselves. Is it any wonder that this is the case when we consider that in play is control of the greatest war making theft machine on the planet today? I will leave it to another post to detail the violent criminality of these two sociopaths, but for now it is enough to acknowledge the similarities on display during debates of this nature.

It is actually much more dangerous to our liberty to have staid, genteel affairs, such as we witnessed during the Vice-presidential debate. In more “civilized” debates it is easier for the candidates to hide and for the electorate to forget about how awful these people are and how violent and damaging are their polices. Button down terrorists are always more dangerous because they normalize this type of behavior. I have always maintained that to exceptionalize Trump is to normalize the 44 previous criminals that have occupied the Presidency. No one should think Trump out of the ordinary and at the same time no one should think that any of them are civilized.

The great benefit to “shitshows” is that they make it plain to everyone the true nature of the types of people that the current political environment produces and lifts up. Only the most vile and violent rise to the top of an inherently corrupt organization. They should (although they probably won’t) give the electorate the opportunity to see just what it is that they have brought into existence. Yes, much of the problem can be placed onto the shoulders of the voters. They have either actively allowed or at the very least acquiesced to the erection of such a large governing apparatus and have ushered into power a long string of vipers. It can only help matters if voters are made to watch these disgusting spectacles and see these people for who and what they really are. They should be made to look on at this; to see what it is they helped create. It is the same reason why executions should be televised; if you are all for the state killing prisoners then you should look carefully at what it is you have called forth. Don’t look away! See this process for all its ugliness and sickening portrayal of the very worst of humanity.

It is much like step one of a 12 step program. The first step is to admit that you have a problem and you can’t do that until you look clearly at the manifestation of the problem. That is why these awful “debates” are actually helpful and genteel affairs are more dangerous. They provide visual and verbal proof of the level of immorality coursing through our nation today. This all may be distasteful, but it is necessary to go thru before a solution can be articulated.

I will finish with this somewhat lengthy quote from the great abolitionist William Lloyd Garrison. While it is specifically about slavery, much of the ideas here fit our age as well:

Yet I know that God reigns, and that the slave system contains within itself the elements of destruction. But how long it is to curse the earth, and desecrate his image, He alone foresees. It is frightful to think of the capacity of a nation like this to commit sin, before the measure of its iniquities be filled, and the exterminating judgment of God overtake it. For what is left us but a fearful looking for of judgment and fiery indignation? Or is God but a phantom, and the Eternal Law but a figment of the imagination? Has an everlasting divorce been effected between cause and effect, and is it an absurd doctrine that, as a nation sows, so shall it also reap? “Wherefore, hear the word of the Lord, ye scornful men that rule this people: Because ye have said, We have made a covenant with death, and with hell we are at agreement; when the overflowing scourge shall pass through, it shall not come unto us; for we have made lies our refuge, and under falsehood have we hid ourselves: Therefore, thus saith the Lord God, judgment will I lay to the line, and righteousness to the plummet; and the hail shall sweep away the refuge of lies, and the waters shall overflow the hiding-place: And your covenant with death shall be annulled, and your agreement with hell shall not stand; when the overflowing scourge shall pass through it, then ye shall be trodden down by it.”