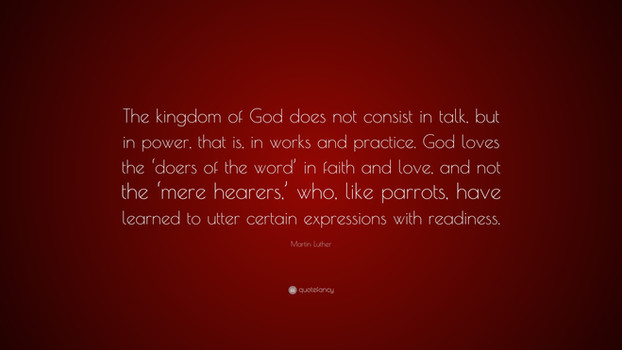 In this Advent time as we prepare for the celebration of the arrival of God in the form of a human and eventually the return of the King to consummate God’s Creation, we would be well advised to think about what we are to do in the meantime.  That is what do we do between the Acts of the Apostles and the Book of Revelation.  Yes, we are hopeful that our faith in Jesus as Lord will save us, but as Luther asks, what does this mean?  What impact does this have in our lives now, how has this changed us?

The Gospel of Jesus Christ had better change us or what good is it?  As James 2; 14-26 points out faith without works is dead.  This does not mean that works saves us, faith does that. But the question for those having been changed by the Gospel is, now that I am saved what do I do?  The short answer is to live as Christ lived, as imperfectly as we will ever achieve that.  Jesus is the standard by which we must try to order our lives.  As the theologian John Howard Yoder asked: If Jesus is not normatively human then what was the point of the incarnation?  That is, if Jesus did not come to show us how to live fully human lives, then why did He come at all?

It cannot be gainsaid that this is the goal of Jesus.  He repeatedly calls on us to follow Him immediately, even to the point of leaving your dead father moldering in the field (Matt 8:22).  Everyone called by Jesus is asked to follow Him right then and there.  Additionally, if we look at the prayer that Jesus gave us it is clear that we are to seek to implement God’s kingdom here on Earth; “thy will be done on Earth as it is in Heaven”.

Sadly, we seem to have lost sight of this fact.  It was a viewpoint that the early followers of Jesus understood well.  It was also a thing that the enemies of Christ understood as well.

As the musician Shaun Groves has well written:

What the nativity scene dimly lit on our mantels fails to capture for us is the defiance, the seditiousness of the Christ Peter knew well. The placid figurines leave us wondering why anyone would want to kill this precious child. Remember though asleep on that hay is the king of kings come to do through his people what no Caesar could: to bow every knee, erase every border, destroy every flag, save every soul, free every captive, feed every stomach, open every eye, right every injustice – and do so by giving up his own life, not by taking another’s.  Wonderful Counselor. Mighty God. Everlasting Father. Prince of Peace.

This encapsulates why Jesus was so feared in His day.  To demand that we as humans acknowledge that God alone is sovereign and is the only one to whom we owe allegiance is to challenge the very heart of the powers of this world.  The Gospel is a dagger aimed at the heart of earthly power and that is the political reason why Jesus was killed.  It was thought that this would squash this dangerous notion, but the grave could hold neither Jesus Himself nor the idea of freedom from earthly power in the form of worship of and service to God.

In the aftermath of the Resurrection the power of all Rome was directed at crushing this seditious sect.  Christians were hunted, harassed, captured and killed.  They would hide in caves, build their congregations secretly and most notably they refused to bow down to the powers of this world.  They refused military service, and they chose martyrdom rather than compromise.  For three centuries the Church grew despite having the power of history’s greatest empire arrayed against it.  Then the church caved.

In the early 300s the emperor Constantine converted to Christianity.  At once, everything changed.  The church went from being persecuted to becoming the power structure and that has been its problem ever since.  The state went from trying to crush this movement to the time-honored strategy of co-opting it.  They tempted the church with all the trappings that power can offer; prestige, material comfort; wealth and of course control over other people. Everything that went wrong with the church from that point on; the ill-advised Crusades to the corruption of the sacraments via indulgences to the Inquisition, flow from the fateful decision to allow His ministry to become compromised.  The church ceased to be a threat.  Shame on us for allowing ourselves to be non-threatening to earthly power.

The subsequent history is full of tragedies borne of this compromise.  The aforementioned Crusades and Inquisition as well as the aligning of the Church with the landed elites and established merchants to choke off economic dynamism and opportunity.  The consistent siding of the church with the rising monarchies of Europe during the absolutist period and the siding of the church with rising state involvement in economy and society in the industrial era.  This is the church that rolled over in Hitler’s Germany and bolstered the strength of dictators throughout Africa and Latin America. This paragraph only scratches the surface of this lamentable history.  The awful reality is that the church cannot truly draw people to Jesus while living in such rank hypocrisy as to be partners with the state.  It’s like a 12-step program for addicts; step 1 is to acknowledge that you have a problem.  Well, we the church have a problem, we are hooked on power.

This is however, not the only side of this story.  The church has still consistently produced leaders who bravely challenged the existing earthly order and demanded that the church reform itself.  Figures like Francis of Assisi, Jan Hus, Martin Luther (the most successful one) on to the 20thcentury martyrdom of Dietrich Bonhoeffer.  Even today there are stalwart believers who refuse to acknowledge the state’s right to incinerate the planet or trample the human rights of any of God’s children.  It is from this brave few that we must draw our strength.  They are the remnant of the true church, they carry forward the light of the Gospel.  If we steel ourselves for this battle, refuse to compromise and build a movement, one soul at a time, rejecting all state power one act at a time, we just might once again become the threat to earthly power that God always intended us to be.