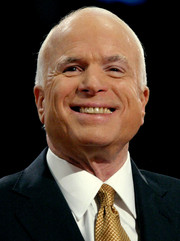 Let me start with what should be the first words out of a Christian’s mouth upon someone’s passing; may they rest in peace.  I truly wish that for John McCain.  I am not glad he’s dead nor did I take any joy in his suffering from brain cancer. I have personally known people who suffered and died from glioblastoma and I would not wish that fate upon anyone. Let us further stipulate that all of us are a mixed bag; neither all good nor all evil.  There are undoubtedly many fine characteristics that made up John McCain and many qualities that are admirable.  It is also appropriate to offer prayers for those who knew and loved this man, they are genuinely grieving and should be remembered in our prayers and supplications.

We, however, also have an obligation to the truth.  This is especially so regarding historical truth.  Regarding this obligation for historical truth we must state clearly, if not also sadly, that John McCain lived a monstrous life.  His was a life of consistent support for violence and oppression and the crushing of all those whom he considered America’s enemies.  His life was a microcosm of all that has gone wrong with this nation, especially its foreign policy and the whitewashing of McCain’s legacy is a microcosm of the whitewashing of America’s egregious sins and furtherance of a worship of the military.

Now there are many who will claim that now is not the time to voice such sentiments.  I strenuously disagree.  First, for God’s people NOW is always the time to give witness to the Gospel and to speak truth to power.  The call of Christ is immediate and unconditional and must be treated with utmost seriousness by His followers.  Second, if you listen to these naysayers carefully, now is neverthe time.  This is similar to criticisms of those protesting police brutality by kneeling during the national anthem.  They say “sure they have grievances but that is the wrong forum and an inappropriate time.”   They always say that.  Same rings true of conservative critics of the Black Lives Matter movement; wrong time, wrong place, wrong manner, etc.

This is all the more true of a public figure.  That person’s passing is the perfect time to review their legacy, as there is maximum attention on this individual.  In 6 months or 5 or 20 years few will care and they will ask why are you bringing up “ancient history”, “this is surely not the time to discuss this.”  No, as politically incorrect as it may seem, now  is the time  to discuss John McCain’s legacy.

What a baleful legacy it is. For the entirety of his adult life John McCain was at the center of some of the most vile episodes in United States history.  Starting with his deep embrace of a blatantly immoral war in Vietnam (a war he never renounced) to his ever consistent support for an American empire, he gave voice and material support to the most violent instincts in American life.

John McCain never wavered in his support for an expansive U.S. foreign policy and “muscular” military posture.  He supported interventions all over the globe from Central America in the 1980s to the Middle East, in the 1980s and 1990s, including the first Gulf War, to Bosnia in the 1990s, to the Afghanistan overreaction to 9/11, to the Iraq War in 2003, to the Libyan regime change in 2011, he was ever the warrior at the wall, ready to hurl mass violence on any who dared question U.S. imperial hegemony, no matter how high the butcher’s bill.

Along with that came the inevitable truncations of the civil liberties of U.S. citizens.  He never saw a covert operation he did not like nor any inherent right of people to have their privacy left intact.  This is what he thinks of people’s right to free speech.  If the demands of the Almighty State required such rights violations, then so be it.  He never really considered that people had rights, only obligations to a mythical and ever violent “greater good”.

In the course of working out his imperial philosophy John McCain was always ready to support a “friend” (read compliant client state), no matter how odious.  He never stopped supporting right wing dictatorships when they served U.S. imperial interests.  The list of such support is long and odious.  The Central  and South American dictatorships, Marcos in the Philippines, African dictatorships in the U.S. bullpen to all the miscreant regimes in the Middle East, particularly the vile House of Saud and the apartheid regime in Jerusalem.  Once again John McCain made it clear he did not care a whit for anyone’s human rights.

This only covers the policies he was able to successfully support.  Had he gotten what he really wanted the record for be far bloodier. He supported military intervention at every turn.  He never saw a situation that he felt should not be met with U.S. force.  This was especially true of his lifelong desire to start a war with Iran; to the point he, to the tune of a Beach Boys song sang in public about bomb bomb Iran.  Nothing like flippantly joking about war to make one an American hero.  His only redeeming position was his consistent opposition to torture.  That, however, pales in the light of the violence he supported and desired.

His domestic politics were little better, for all the talk of being a maverick.  He would support any domestic program in tradeoff of an ever larger defense budget.  He was also a political panderer when he needed to be.   When pressed in the primaries running for president he moved sharply to the right on immigration and of course saddled the nation with the grossly unqualified Sarah Palin as a sop to the right in 2008.

All of that makes his legacy a sad and bitterly pathetic one that no one should hold as noble.  Yes, it is appropriate for those that knew John McCain to weep over his passing.  I choose to weep over the hundreds of thousands of nameless, faceless innocent victims of John McCain’s life and legacy.  It is these powerless innocents that as always pay the price in blood for the mega maniacal vision of the imperial class.  It is to these powerless that Jesus directs our concern, politically incorrect though that may be.