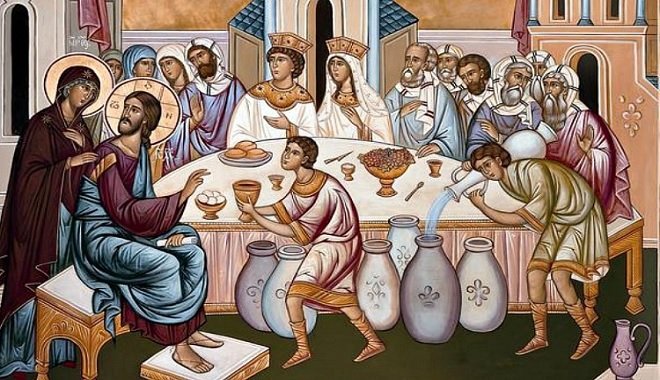 This week’s Gospel text is John 2: 1-11. This is the well-known story of Jesus performing His first miracle, or as John calls it a sign, at the wedding in Cana. This is also an example of a stereotypical interaction between a mother and son. Of course, it is a stereotype to speak of a Jewish mother in a comedic manner. This is certainly a trope offered by Jewish comedians themselves. In the famous Seinfeld episode, “The Strike” (the Festivus episode) Jerry is asked if his friend Tim Whatley (who converted) is still Jewish. Jerry responds “Oh, sure. Without the parents, it’s a breeze.” I suspect that this is a universal view of children toward their parents. I would suggest that Jewish parents have nothing on pre–Vatican Catholic parents…pre-Vatican I that is! We have all been there, one way or another.

What is notable about this passage is first, that it is a most human of occasions, a wedding celebration. These are and always have been times for joyous human celebration. That Jesus and His disciples are in attendance points to His essential humanity. Also pointing to His humanity is Jesus’ clear irritation with His mother. The party hosts have run out of wine, and she wants Jesus to do something about this. He tells her, it’s not my problem and in any event “My hour has not yet come”. Jesus does not seem ready to reveal who He is and what He can do.

In true motherly fashion, Jesus’ mother tells the servants to do as Jesus instructs them. She is of course assuming that in the end Jesus will obey His mother, and of course, He does. This is also truly human, and what a loving son would be expected to do, irritated or not. Not even our Lord can refuse His mom. All this points to a reality that we can all identify with. It is an outstanding reminder that nothing we have experienced as humans is alien to our Lord, not even an irritating mother!

The larger significance to all of this is that Jesus is beginning to reveal Himself and what it is that He can do. He has the power to change even water into wine. This is certainly emblematic that if He can do this, then He can certainly change us. He takes what He finds, the water and changes it into something different, the same way that He takes us as we are but does not keep us as we are. He changes us into something different.

Wine, of course plays a large part in the Jewish tradition. It is often connected to ideas of salvation. We see this in Amos 9:13 and Isaiah 25:6. It is also seen as a sign of abundant life. Speaking of abundance, it is notable that Jesus creates 6 20-gallon jars of wine. This is enough for over 2500 6 oz. glasses of wine, that’s an abundant party! This clearly represents the ability of Jesus to change us into something that provides abundant life and great joy.

Also notable is the point about Jesus not replacing the good wine with bad, the way most of us do. That is an old trick that in my drinking days I used to employ. The first six pack was something good, like Michelob. The second six pack was cheap like Busch, because your taste buds were killed off by the first six beers. This is not the way for Jesus, however. What He changes the water into was an even better wine. What He changes us into is something much better than what we started as. Everything just gets better and better with a relationship with Jesus.

As far as first signs go, this is a wonderful one and an endearing start to the public ministry of Jesus. We get a real sense of who He is and what He can do to change through His power. He has “revealed his glory; and his disciples believed in him” (v. 11). As we see His power revealed in the way we and those who believe in Him are changed, may we come to or increase the reality of our belief in Jesus.