In the Shadow of the Penguin 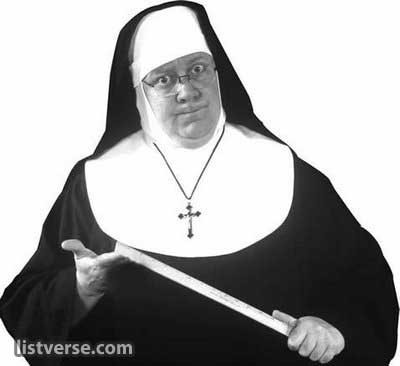 Please excuse the emotional throat clearing that follows.  Growing up Catholic I can tell you that no one loomed larger than the Nuns.  They were the day to day interface with all things Catholic and they truly seared themselves onto the memory of Catholic youth everywhere.  They are one of the chief reasons that the culture of Roman Catholicism runs so deep.

If you are not Catholic it is hard to convey the power and the depth of this Cultural Catholicism.  An anecdote might help.  I ran into the brother of a classmate of mine from a large Catholic family.  It is the nature of Catholic relationships that you know not only the one who is your age but also their parents, siblings, cousins etc.  You are friends with entire families not just a single individual.  In catching up with this man I learned that his two children were at a Catholic grade school.  This was surprising as this person had long been an openly avowed atheist.  He then proceeded to tell me that this grade school was up in his grill about the fact that his children were not baptized.  So not only was he still a non-believer, so was his wife, otherwise the children would have been baptized.  Yet he sent his children to Catholic school.  This was not in a town like Chicago were the public school system was so awful that parochial school was a better option no matter what your beliefs.  Such is the power of Cultural Catholicism that even atheists are held in its thrall.  That being Catholic is a part of one’s DNA is why, when a break does occur it often becomes a bitter break with the Catholic Church.  People are severing a part of themselves, a part of their identity and this is painful, to say the least.  This results in becoming a “non-Catholic”, a person forever defined by what they are not, which is infinitely sad.

But I digress.  In the Catholic world it was the Nuns who ruled day to day.  They could strike fear with a look or a sharp word.  One of the reasons I am not particularly afraid of terrorists is that I was educated by nuns.  If Sister Celine had been sent to the Middle East armed only with a ruler, I suspect she could have cleared out ISIS within a week.   I could fill many pages with stories of what they did to enforce order and orthodoxy.  I was witness to many depredations of people’s dignity and heard tell of many others from my siblings.  Things such as pushing an eraser on the floor with your nose or individuals hung up on a coat hook rack by the back of their shirts or the cries of the victims of a paddling via the “Board of Education”.

A few select anecdotes should suffice.  Abuse was both physical and mental.  One stellar memory is of being in the bathroom in first grade and not paying attention and cranking out a wasteful amount of paper towels from the old fashioned dispenser.  Whereupon Sister Celine smacked me in the back of the head and dragged me by the ear out of the bathroom.  All the while I could only wonder: what in the hell was she doing in the boys bathroom, as if any area was off limits to this woman!  Another notable memory came from Sister Raymonda the “librarian”.  I was tasked with counting the number of zip codes in our metro area in the phone book (don’t ask why this is even remotely educational) and inadvertently covered up one with my arm at the bottom of the page.  This warranted a smack to the head whereby I discovered my error.  It was here that I learned that pain is not an effective pedagogical tool.

I was exposed to racism as well.  In one instance Sister Celine called me up to the front of the class in response to my talking when I was to remain quiet.  She proceeded to ream me out in front of the class (because she believed in management by humiliation).  She knew my parents employed a black housekeeper because the convent was across the street from our home.  She then asked where it was that I picked up my bad habits, “from that negro cleaning woman I suppose”.  Or when Sister Joan Marie caught me using the nearby creek as a lavatory and implored me to act better because I was not “some poor negro child who had to pee behind a tree”.  At the ages of 6 and 8 years you only know that there is something wrong with these statements, some years later it hits you that these women were racist assholes!

Just being a witness to these types of events leaves an indelible imprint as well.  Every class has a skirt lifter, ours was no exception.  This young man was told by Sister Joan Marie that if he did this again he would be slapped across the face.  He of course transgressed again.  Sister did not get angry and impulsively hit him, this I could understand.  No, she proceeded to enact a ritual that is as close to an execution that I ever wish to see.  In the middle of a playground field she faced the accused.  The field was torn up due to renovations.  The girls of the class were at one end behind some dirt mounds, the boys at the other end.  Just the two were in the center of the field.  Sister Joan Marie started her assault from about her hip and by the time her hand reached this boy’s face it had serious velocity.  She cracked him open-handed across his face and he went down like a victim of Muhammed Ali.  It was one of the most stunning things I have ever witnessed.  The deepness of these events on my memory should be evident by the fact that they occurred more than 45 years ago.  Such is the imprint of a Catholic upbringing.

And yet…and yet I cannot completely look back on these experiences without some sadness for the plight of these women.  The Catholic church then and now treats them as second class citizens.  These women turned their lives over to Christ in honest faith.  That faith was repaid by being shunted into healthcare or education regardless of training or temperament.  So nuns were regularly misemployed and underemployed as well as not being allowed to fully participate in the proclamation of the Gospel or the administration of the sacraments.  Add to this the fact that they were cut off from any intimate relationships (as are priests) and forced to dress head to toe in black every day.  Oh and let’s not forget that there is no retirement plan offered them, so when they are all used up and can work no more they face their declining years with the real prospect of abject poverty.  You live that life for 30 years and see if you don’t crack.  Smacking some smart-ass punk upside his head becomes a venting tool as much as anything else.  This does not excuse the awful things these people did but it sure as shit makes it understandable.  From understanding should come some sympathy.

In the end I  am what I am because of my experience.  I stood in the shadow of the penguin and lived to tell the tale.  I am blessed to be able to look clear-eyed at what these women did, and to understand some of the systemic reasons behind it all.  I am also blessed in recognizing that, like all of us these nuns are a mixed bag; that’s just what people are and that because of this I choose not to be an “ex-Catholic” but to define myself more positively as a Christian, in the Lutheran tradition who is made up of all my past experiences and who will stumble forward as feebly as I can in the name of Jesus Christ.