Impeach? Sure, Remove? O.K. Replace? Why? 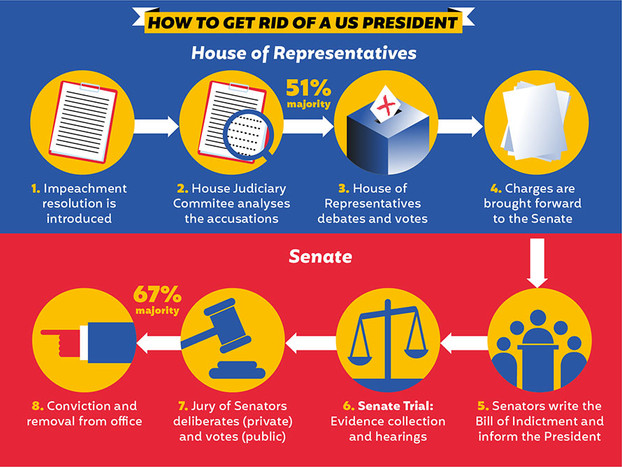 So, as the House of Representatives moves ever closer to actually impeaching Donald Trump, it is a good time to reflect on what all of this might mean, especially for people of faith.

First, it seems as if impeachment is always warranted.  At some time or other nearly all 45 occupants of the presidency have committed an act or acts which if people were honest, they would have to admit ran them clearly afoul of the constitution.  Whether it be misappropriation of funds, rule by executive order, or most often, committing the U.S. military to actions not sanctioned by Congress, as is clearly spelled out in the document.  In fact, the very nature of the modern presidency lends itself to impeachable offenses as the executive branch has grown monstrously large and powerful.

Second, in the final analysis, impeachment is whatever a majority of the House of Representatives says that it is.  There are no criteria spelled out to define “High Crimes and Misdemeanors” and there are no criteria spelled out in the constitution as to how the House must go about deciding on whether or not to impeach a president.  So, all the president’s claims to the contrary there is nothing illegitimate about the process itself.  Yes, it is bare-knuckled politics that the Democrats are playing. So what?  It is an inherently political process.  If the Republicans have forgotten what bare-knuckled politics looks like, they should refresh themselves on their handling of the Obama Supreme Court nominee Merrick Garland.

So, it would seem that all are worthy of impeachment and it is only political calculation that is to determine whether or not a president is impeached, the next question is whether to support removal.  I would suggest that if all are worthy of impeachment, then removal should not bother us at all.  There is nothing divinely preordained about who is president, despite the claims of some past (or current) holders of that position.  Keeping or removing a particular individual should not bother us in the least.

Some may claim that once we start down this road, we will inevitably end up in a place whereby only a member of the majority party in Congress will be allowed to be or stay president.  We would evolve into a sort of British style parliamentary system.  So?  Is this the end of the world?  The form of the government is not nearly so important as the substance of what the government is empowered to do.  Some argue that the form does impact the substance, which is clearly what the Founders thought when they designed the constitution.  They were self-evidently wrong.  Once the underlying philosophy of government changed, the arbiters of the constitution began to do legal and logical contortions to allow for a size and scope of the government that would have shocked the founders.  From the perspective of civilized people; either the constitution permits a government of the size and scope we have, or it is powerless to prevent it.  Either way it is not fit to continue to exist.  In other words, a constitution that was designed to limit government didn’t, so now what?  Since this is the crux of the matter, impeachment and removal should not bother us at all.  Maybe, if the brood of vipers that makes up the ruling classes is so busy impeaching and removing all of the time, they will have less time to kill and plunder.   Who am I kidding?  They will never stop the two things government is best at in all the world.

This brings us to the final part of this equation; replacement.  I would suggest that we should be sanguine with impeachment and removal but should draw the line at replacement.  This seems a colossal waste of time and energy.  Now we all know that if a president is impeached and removed, they WILL replace him/her.  We should however, ask our statist friends a simple question; why?  Why do we need a person with such powers to exist?  It is grotesquely irresponsible to vest this kind of power in the hands of any human being.  The power to literally make the rubble bounce twice rests in the hands of ONE person.  How deranged are we as a society and as a human civilization to ever have allowed this to occur?

If a president is impeached and removed, this is a perfect opportunity to question the need for such a position to exist.  The actual role of the president under the constitution is pretty modest.  To “faithfully execute the laws”.  Which laws?  Those under the clearly enumerated powers that have been granted to Congress in Article I.  It is only the underlying change in government philosophy that necessitated the rise of a large executive branch, as a powerful government is difficult to maintain under the diffusion of power created by a strong and vibrant legislative branch.  We should take the opportunity to question why we need someone this powerful in this position.  It is the president’s job to uphold the constitution, not to be the “protector in chief” or the “comforter in chief” or the director of our lives.  To replace one “king” with another is pointless and starts people thinking that God’s people are alright with this sorry state of affairs.

So, by all means, impeach and remove, but replace?  Let us simply say a polite no thank you.  We are on strong scriptural grounds in rejecting such a leader.  There is of course no sanction in Scripture for any such ruler; in fact, God warned against the tyranny that would ensue from the anointing of a king (1 Samuel 8:10-22).  It, of course, came to pass that the kingly experiment did not end well, as the chosen people split apart and once again began to worship idols. (1 Kings 12: 1-17, 25-29).  So, if the need should arise to replace one U.S. tyrant with another let us remind ourselves and the world that there is no king but Christ.