Everyone & Everything Has an End Times Story

All faith traditions have an end times story. This may be based on their sacred texts or a cultural perspective or it may be based on a currently fashionable narrative. One thing is certain, this will all end someday. It is not likely that we will be around to see this personally. Then again, our personal ending may take us to the end of it all. At least that’s what I think and hope.

One day the sun will give out or the earth freezes over or perhaps humanity will finally blow the place to smithereens. Everyone has a pet theory about how the world and the universe ends. There have even been popular television shows about the end, such as How the World Ends or at least what happens to Life After People. It seems we all have a morbid curiosity about how it all unwinds.

For Christians the Book of Revelation has been a source of great speculation about how God plans to bring His creation to a close. Many, particularly of a fundamentalist bent argue for the Rapture and get very specific as to how it all will happen. This does not seem to be very good theology in the end, as this book explains.

There are those who are “premillennialists”, that is those who think Jesus will return to earth and then inaugurate his 1000-year reign. This is contrasted with “Postmillennialism”, the belief that the 1000-year golden age will occur then Christ will return to earth. The likely best Scriptural answer to the end times is to embrace “amillennialism”, the belief that we do not really know the exact when and how of the end. This is a better, deeper take on the rich symbolism of Scripture and who the audience was for these works. Particularly John’s Revelation.

Even earth worshippers and other assorted heathens have an end times narrative. One does not have to be a person of faith to think they know how it will all end. Whether it be nuclear holocaust or alien invasion (extraterrestrial, not immigrant) the literature is filled with dramatic accounts and predictions. Just peruse old Twilight Zone episodes for a sampling.

Lately the most consistent heathen narrative is that offered by the environmental doomsayers. True enough many Christians fall into this camp, but the bulk are those that speak of Mother Earth or Gaia. While Christians can and should be concerned about the environment, to worship a created thing rather than the Creator is a clear theological derailment.

In any event, these folks have a whole doomsday scenario outlined about rising seas, boiling seas, the world on fire and air running out. The most extreme think we are within 12 years or so of the earth’s expiration date.

No, Seriously, We Are the Last Generation

A sizable proportion of every age is made up of a group of people who think that the world will end within their lifetime. There are likely even more who have a hidden desire for this to be true. This, I think, helps explain the popularity of this strain of science fiction. If this is the last generation then this magnifies our importance in cosmic history. If we are but one generation amid thousands or millions of generations, then ho-hum. Then there are those who aspire to deliver humanity unto Utopia and at the same time, avert the certain destruction of the world and so become cosmic superheroes. Take that “Greatest Generation”!

I don’t think that people who hold this view are insincere, just highly likely wrong. The problem is that many who think this are willing to entertain all manner of immoral and counterproductive policies to face or avert the end times. We all know what the road to hell is paved with.

Outright statists may or may not be true believers in the end of the world, or the arrival of utopia, if the right buttons are pushed. In any case they are dangerous because these extreme motivations, avoiding or facing the END TIMES leads to extreme solutions. History is full of such examples: Leninist/Stalinist USSR, Hitler’s Germany, Mao’s China, Pol Pot’s Cambodia, just in the 20th. century alone. What these statists really want is power, whether true believers or not and history has clearly shown the existence of such power to be the real danger to the world.

No, Seriously, This Time They Are Wrong…Again

Christian end timers are still wrong, as they have been all along. As my former pastor used quip “if it’s one thing you know about someone who claims to know when the world is ending, it’s that they don’t”. In the end not even, Jesus would offer a definite answer, deferring instead to the Father. See Matt 24:36 “‘But about that day and hour no one knows, neither the angels of heaven, nor the Son, but only the Father”. If Jesus is not willing to venture a guess, then we best not either; it’s not a good look.

By far, the loudest group of end timers is of course the environmental doomsayers. That’s an amazing accomplishment considering the 2000+ year head start Christians have on them. It is taken as an article of faith that the world is burning up and blowing away. They are wrong, not for the same reasons as Christians. I mean, they do not have a Messiah to look to as an example. No, Greta Thunberg does not count as a Messiah. These folks are wrong because they do not have the facts on their side.

A quick perusal of the facts can show that while climate change is a problem, it is not an existential threat to humanity. The main problem is that according to the United Nations Intergovernmental Panel on Climate Change (IPCC), the average person could be 10 times richer by the end of the century but with climate change will only be 5 times richer. This is a problem, but you don’t solve it by spending trillions to achieve billions in savings and make everyone poorer in the process. This can be visualized with these charts: 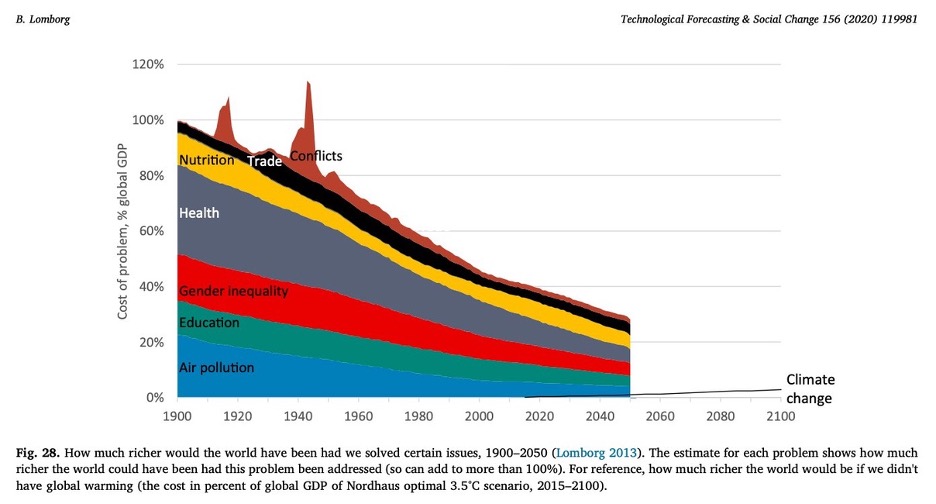 If we look at climate deaths, which everyone sees as rising we see the opposite. Climate caused deaths dropped almost 99% since 1920: 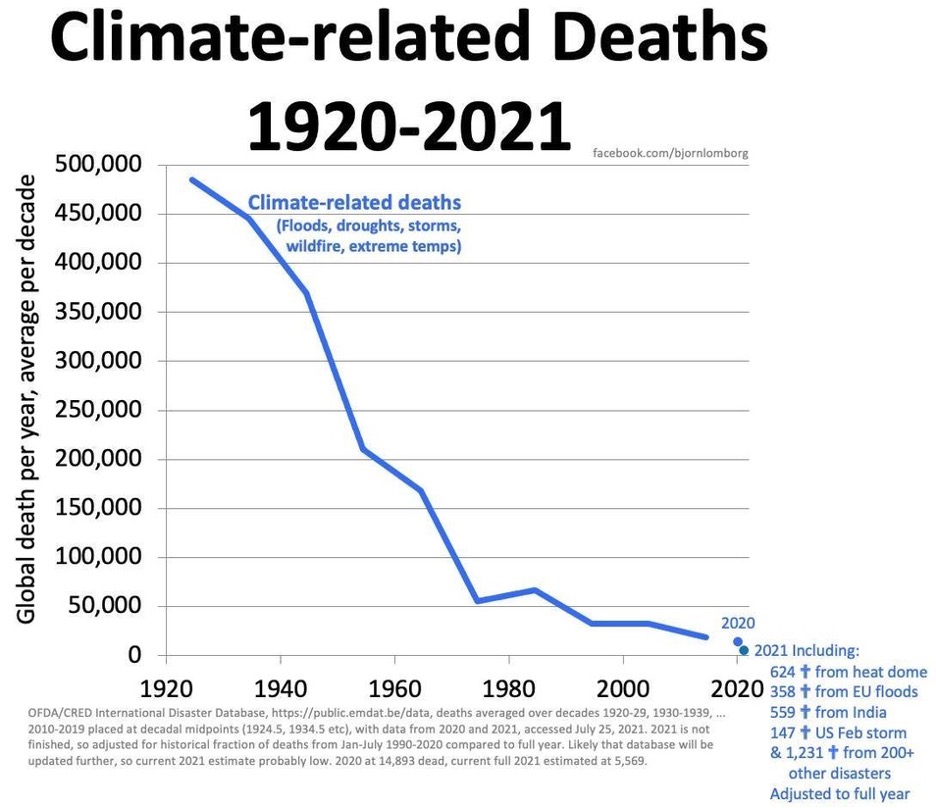 Deaths due to heat have risen but have been vastly offset by lower deaths due to cold, which is a far greater threat to life: 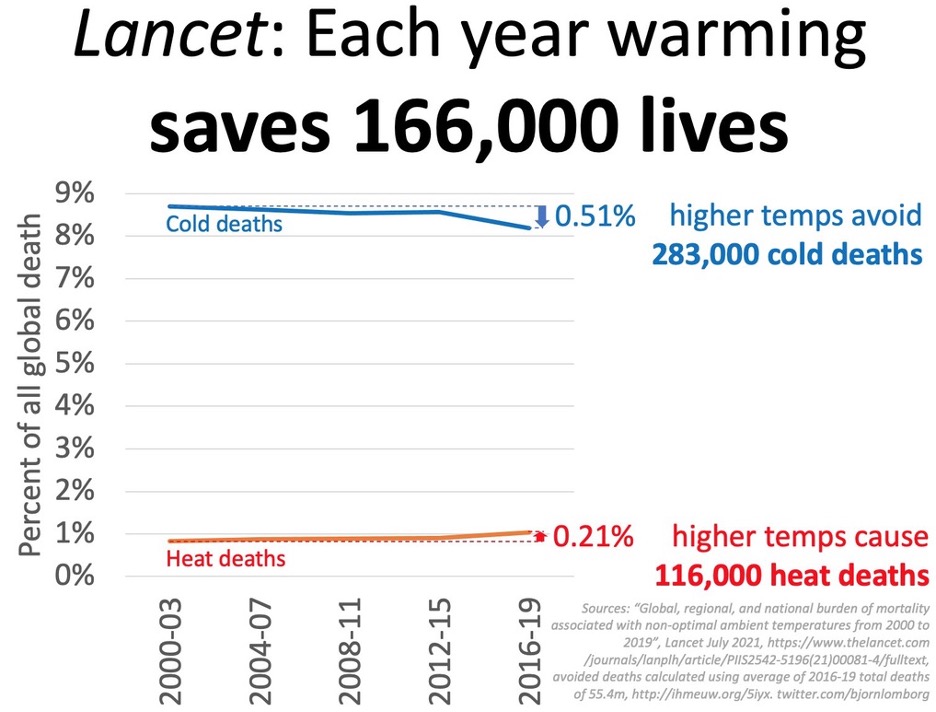 Overall damage from climate as a percentage of the economy is also way down, contrary to common belief: 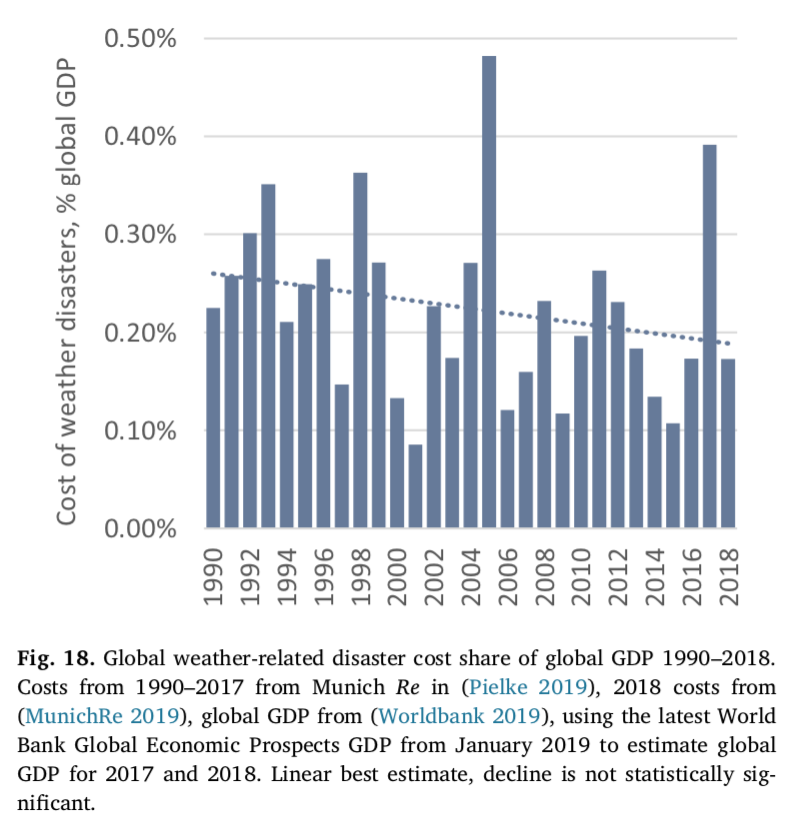 The overall trends are clear. Yes, the earth is warming, yes humanity is causing a good chunk of it. However, as we have grown richer, we have the capability to mitigate these effects while not sending our standard of living back to the Middle Ages. If we fall for the statist plan to socialize all our lives in the name of averting an end time calamity, we will hurtle ourselves closer to extinction than if we simply let human cooperation and markets hold sway and deal with our problems in a rational and moral manner. So, yes, the end is coming but as Scripture should tell Christians and the data should inform the heathens, we do not know exactly when, but not likely in the next 12 years, so a panicked reaction is not called for. As always, if we want to do God’s justice, we need to do something that works.