He Has the Whole World in His Hands 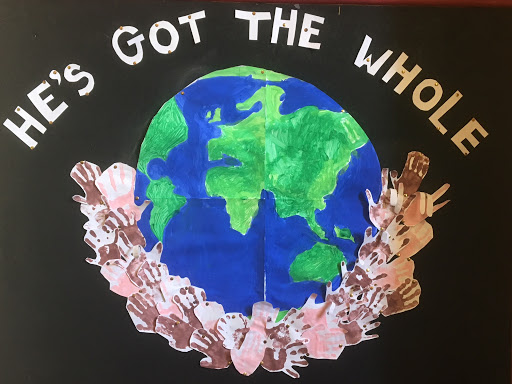 The title obviously plays to the famous hymn that is so recognizable to Christians. It is a fundamental belief of ours that God does indeed have the whole world in His hands and that not only did He call creation into being, but He sustains it at all times with His power. We believe, literally, that He has all of creation in His hands.

Sadly, we too often think that He only has us in His hands. We too often think in terms of human tribes and narrow human interests, as if that matters to God. This is not new; it has been a facet of almost every religion that has come forth in human history. It animates much of the religions that dominate the planet today. It is of course to be wholly rejected by Christians as incompatible with our faith.

To show how clearly this tribal thinking is just like all the rest let’s take a somewhat uncomfortable stroll through beliefs that are similar to ours. Uncomfortable, because we don’t like facing the realization that many of our beliefs were a part of the wider world from which our doctrines emerged.

Let us take the core belief of our faith in the Redeemer or Savior. This notion is not unique to Christianity. The Near East produced many such variations on this theme: in Asia Minor the cult of Attis; or the cult of Osiris in Egypt who would be the judge of the dead; Dionysus in Greece as well as the Hebrew notion of the Messiah. This figure was often referred to as Christos, which means anointed one. This figure is profoundly a man but also a god. It is from this that the notion of the Son of Man comes from, which Jesus often used to refer to Himself in Scripture.

The logic of this goes as follows. The unseen god or spirit made man in his image. It follows that god is himself man. He is the real, ultimate, perfect, eternal man of whom we are just feeble copies. God or the ideal and first man is the father. The redeemer is his son, the image of the father or the son of man.

Usually this savior comes down from heaven to save mankind. When his work is done, he goes back up to heaven to sit by the side of the father in glory. Thereafter the chosen people whom he has saved will be able to join him. As I said, this may make us uncomfortable, in that it seems to reduce our doctrine to just an imitation of many other cults in this area at this time. It should not worry us in any way. First, we believe in one Jesus of Nazareth as the Savior. Our hearts are filled with this belief and the joy that God gives us thorough this belief. Second, while our belief in the saving work of Jesus is similar to these early mystery cults, it differs in one key idea. These cults were exclusive. Even the Hebrew belief in the savior was exclusive (I would argue this was a perversion of what the Jewish people were chosen to do; proclaim God’s grace to all the nations). Every one of these cults had a particular contract and set of passwords that granted one salvation. Christianity, by contrast, embraced a universal application of God’s and His Son’s redeeming work. This gift was open to EVERYONE.

This brings us to this week’s Gospel text, John 3:1-17. This of course includes arguably the most famous verse in the whole of Scripture, verse 16: “For God so loved the world that he gave his only Son, so that everyone who believes in him may not perish but may have eternal life.”. The staggering implications of this are too often lost upon us in our present age. God is not offering His salvation to just a particular narrow tribe or group of people who use some code or password to get in. He is offering this gift to everyone, everywhere. We cannot and dare not claim God for our own, He is for the whole world; He said so Himself. How can we claim to believe in Scripture as the revealed truth of God and ignore this passage and all it implies?

The practical implications should not be lost on us either. This is not a passage that deals directly with what should be our rejection of government as an incompatible worship center to God. Nonetheless there are political implications. We cannot embrace the universality of God’s saving grace and seek to erect walls at the border, as if lines on a map are dispositive to loving our neighbor. We cannot play beggar thy neighbor trade games to seek commercial advantage or geopolitical hegemony (even if these policies actually backfire). We cannot cordon ourselves off in hermetically sealed communities that fail to welcome or better yet, actively invite others to join.

God so loved the WORLD that He gave us His only Son. Let us embrace the universality of this gift and seek to live with gratitude for what God has given us by opening our arms as wide as Jesus did on the Cross.