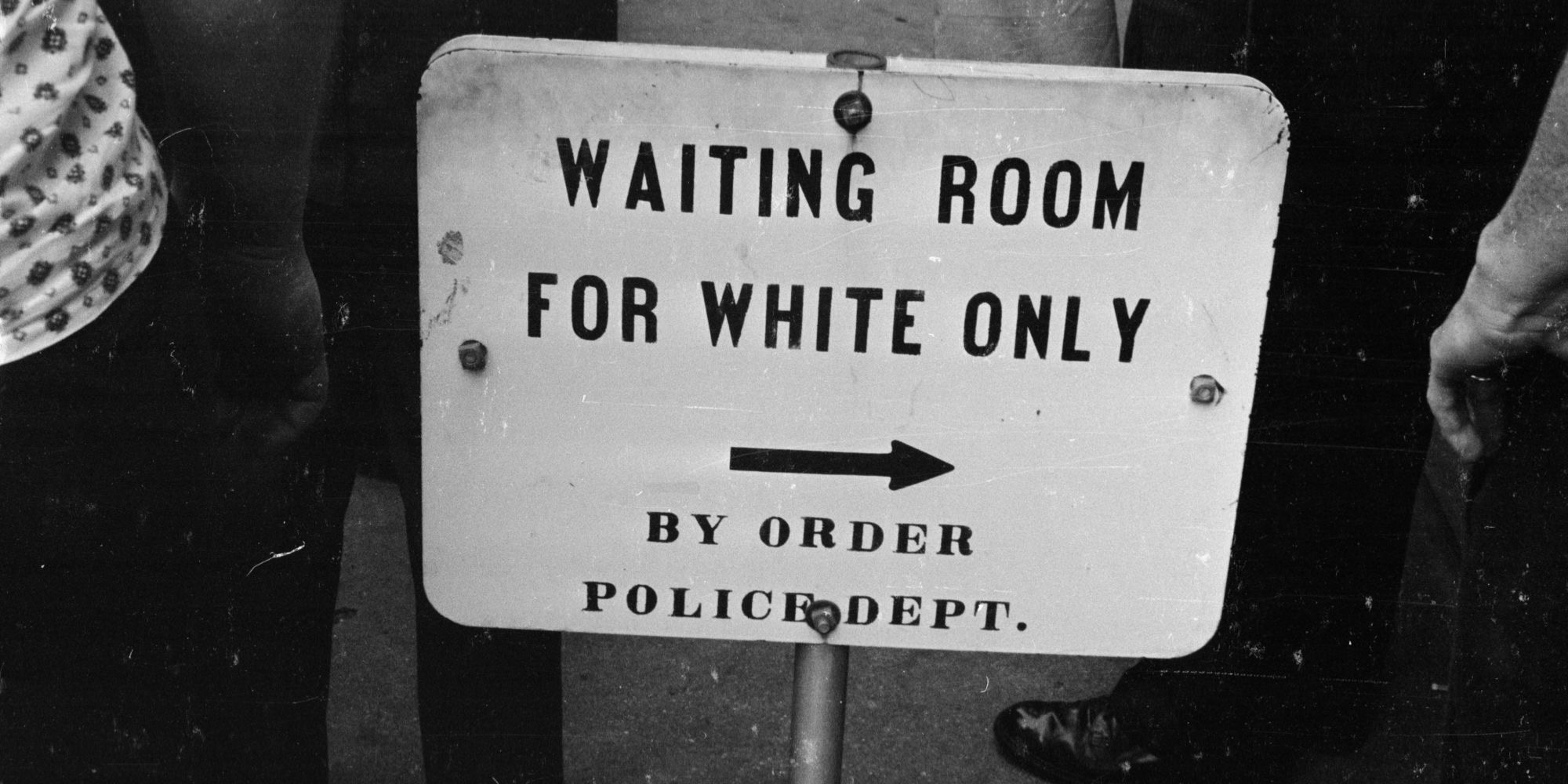 The protests since the murder of George Floyd have brought, once again, into sharp relief the racism that is endemic to U.S. culture. This should distress us greatly but not shock us at all. There is indeed a long history of racism in this nation, that should be obvious by a cursory review of U.S. history. This is not to simply echo the talking points of the “woke” left but to acknowledge reality. It is equally a reality that bigotry and racism are not unique to the United States nor even to the West. China has a racially troubled history stretching over millennia and it continues to this day. Racism and tribalism have existed from the dawn of time and across the planet, just ask the Tutsi in Rwanda. It would seem that tribalism and racism actually precede government.

It is, however, only when those with a racist agenda get control of the levers of power via a government that the threat grows exponentially. This has been borne out time and again. Whether it be ancient China’s record of oppression during the Han dynasty or the enslavement of “others” by the Muslim Caliphate in the early Middle Ages or the various pogroms lead against the Jews in multiple nations, up to and including the Holocaust. The only way to systematically terrorize, and oppress a racial group is via the government. It is the only society wide institution that can impose a racial policy upon its area of control. This is not to deny extant racism and its often-violent effects, when perpetrated by private actors, but the true systemic threat can, by definition only arise when the system is turned toward a racist policy.

This is true in this nation’s history, as much as in any other. The horrid and completely morally outrageous way the native populations were treated, and the manner in which Africans were brought to this nation in chains is testament to this reality. Whites, who came to this land brought with them repugnant and retrograde (as well as unchristian) racial attitudes. They turned this bigotry into policy time and again.

The institution of slavery, protected as it was by legal policy, is the prime example until the U.S. Civil War. The treatment of Native-Americans is also an example of this, as it was primarily carried out by the U.S. military. Yes, there were countless acts of private vengeance before, and especially after the Civil War, as the awful history of lynchings can attest. While lynchings were private actions they had the implicit and often the explicit help of local law authorities and were certainly given the protection of law by the steadfast refusal to prosecute the perpetrators.

This official policy continued via the Jim Crow laws of the late 19th. Century. This was an explicit governmental attempt at social engineering that prevented social and economic cooperation from continuing to erode racial divisiveness. That the market was eroding these racial barriers is logically concluded because if blacks and whites were segregating on their own no one would have thought it necessary to legally separate them in the first place. Keep in mind these laws arose about 15 years after the end of Reconstruction, so it is not simply a case of the Southern White power structure regaining its control. Over time a truly free and voluntary society will tend to break down these barriers, which is why racists are always statists.

We should not forget the anti-Chinese laws at the federal, state and local level that had such a damaging impact upon this community. This culminated in the massive restriction of Chinese and other non-European immigration that took place in the 1920s.

This sorry racial history continued during the “Progressive” Era of the early 20th. Century and the explicitly racist policies of Woodrow Wilson. This sorry story continued with the New Deal era housing policies that explicitly “redlined” areas and made them off limits to blacks and other minorities. This was particularly damaging to minorities as the post WW2 housing and economic boom gave whites a significant advantage in the building up of their net worth and all the opportunities that come with it.

In spite of this awful pattern of policy obstacles there was progress made both in terms of the total poverty rate as well as the wealth gap between races. Progress that is until the late 1960s/early 1970s. You can see the trends in the charts below: 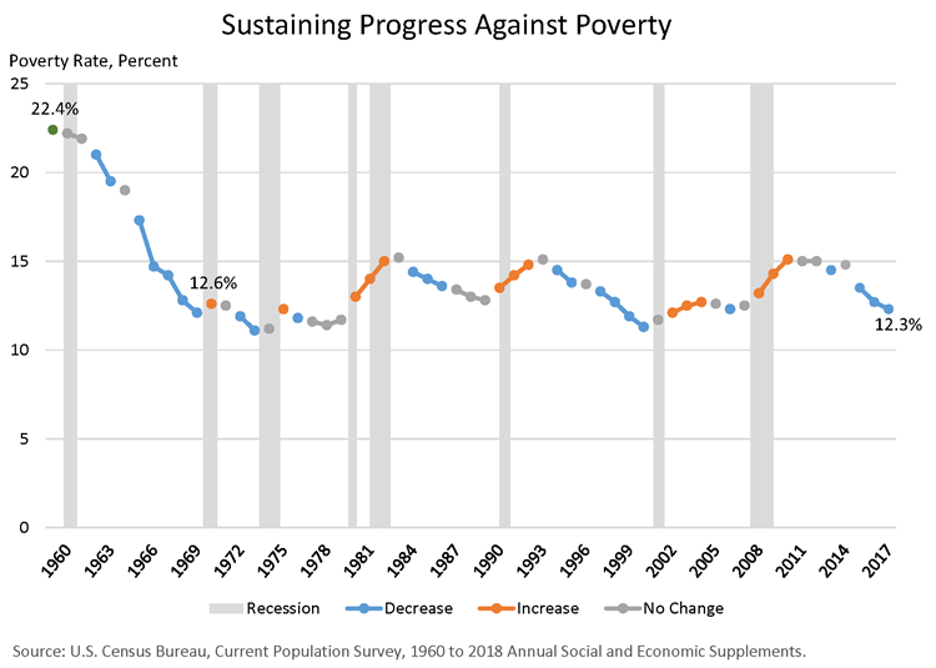 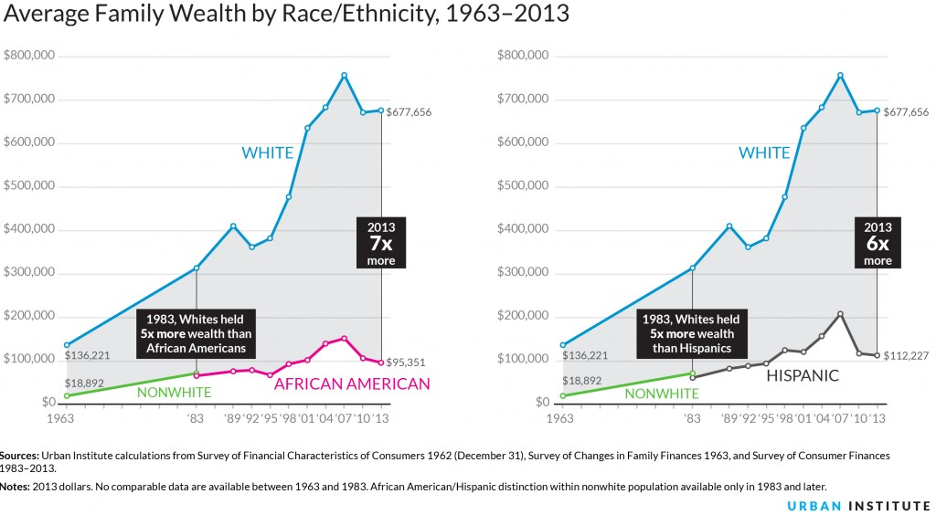 This, not coincidentally, is when the government began its War on Poverty and also unhinged the money supply completely from gold. The money supply issue I dealt with here. That the progress against poverty was arrested should come as no surprise to the economically literate. The War on Poverty (well-intended though it may have been) built into the system structural disincentives to work, form stable families and, especially coupled with the monetary policies, starved the real economy of capital to increase sustainable breadwinner jobs.

Then, beginning in the 1980s, came a series of body blows to people of color. First, the drug war, which created a violent illegal market that continues to create large numbers of dead young black men in the inner cities and a massive population of blacks in the prison system. In the 1990s, came criminal justice “reform”, which dramatically increased the penalties for a range of crimes and ratcheted up the minority prison population once again. Against this backdrop came the militarization of local police, increased asset forfeiture and a series of “stop and frisk” type policies with a dramatically disparate racial impact. Then came the series of high-profile police murders of blacks that most recently included Mr. Floyd.

The point of this somewhat wonkish stroll is to point out the clearly obvious; that the overarching problem in race relations is the existence of a power structure. Yes, that power structure is, in this country, controlled by whites, but as the historical examples show, whomever has control of the power abuses it, often at the expense of racial minorities. To expect that somehow, those who control the power structure (in the U.S., whites) will somehow give it up and stop getting the benefits of all that the power brings is to turn the reality of humanity on its head. Even if you replace the power structure, you have only exchanged one oppressor for another and have all the same attendant problems. There may be no escape from this trap as fallen and amazingly fallible creatures but to keep expecting the power structure to reform itself is to put fallibility on steroids. The only real hope of genuine progress is to reduce and if possible, eliminate the power structure itself. The hope of this nation was in its ideals. On the other hand, the shame of this nation is that it never extended those ideals to everyone, especially people of color. There is nothing wrong with the message of the Declaration of Independence, only the lamentable history that we failed to live up to its ideals. The distressing thing is that those ideals are ideals that most are walking back. Without the foundations needed to maintain a free society we will likely slip into authoritarianism as most nations eventually have.

To accede to the demands of a resurgent socialist left or its twin, the nationalistic right, is to give up completely on the idea of a free and open society and to continue to pit groups (often racial) against each other, as the political arena is by nature a win-lose proposition. We have tried the government thing and it has utterly failed. Maybe it’s time to stop trying the same thing and expect a different result and try the freedom thing. Only this time let’s endeavor to extend the blessings of real freedom to everyone.

We will not eradicate bigotry and prejudice just because we greatly reduce the power of government, but we can greatly reduce institutional racism by dramatically reducing the power of the institution that turns bigotry and prejudice into society-wide racist policy. Bigotry + Government = Racism. Eliminate the government from this equation and bigotry starts to lose the oxygen that gives its Satan’s fire its vile life.