Free to Be Unequal 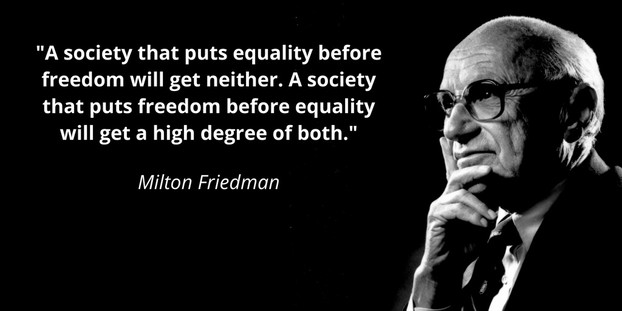 In a recently published article in a lefty journal, the title of which was Abolish Libertarians (given the Left’s propensity toward violence, I suspect the author meant it literally), an argument was advanced against the existence of billionaires. To quote: “Many on the left—myself included—have long pointed out that it’s grotesque to let billionaires profit from the deprivation and suffering of others”.  In the process an overlapping set of arguments was advanced, none of which makes any sense.

First, as the above quote suggests the author is possessed of the notion that commerce is a static activity and one’s gain is another’s loss.  Second, the author strongly implies that capitalistic nations have a greater propensity to wealth and power disparities than socialistic ones. Third, most libertarians are running around arguing that the existence of billionaires causes economic growth and that this is nothing more than shilling for class advantage.  As a part of this claim the author, a self-identified economist, states that “We have no fucking clue what causes economic growth.”  Why should we reject all these claims?

The notion that the existence of wealth is a prima facie case for exploitation is a hallmark of the left.  They despise commerce and see it as one sided.  Their view is that in an exchange there is a winner and a loser, incidentally, they share this view with Donald Trump.  This static view is, of course, at odds with reality.  In a free exchange people choose to do what they perceive is in their interests to do. A customer values the shirt for sale more than the $20 she has in her pocket; the vendor values the $20 more than the shirt.  The exchange thereby creates two winners.  I discussed this phenomenon of the double thank you previously.  Now the left will for a variety of reasons, claim that people are not really free to make such exchanges and that they are manipulated into buying the things they do, blah, blah, blah.  They are denying moral agency to adults and advancing the notion of collective rights because people behave in ways they don’t like.  This is an exposure of their own character issues, as we have seen, more than an indictment of the actions of market participants.  The moral reality of exchange is that absent force and fraud people can make up their own minds, thank you very much Mr. Marx. (Karl not Groucho).

So, if people are free to make their own choices (a hallmark of capitalistic societies) in ways that create win-win situations, what about the disparities of wealth in such societies? The reality is that every society that exists today, that has ever existed in the past and ever will exist has disparities of wealth, status and power.  This is true of all ancient societies, all feudal, medieval societies, all capitalistic nations as well as socialistic ones.  The notion that capitalistic nations are unique in this is laughable and ahistorical nonsense.  The Communist party members in the USSR had greater wealth and power than the rest of the masses. They got to shop in the stores that actually had goods available while the masses waited in long lines to look at empty shelves.  Kim Jong Un and Nicolas Maduro and their entourages don’t miss any meals while their fellow non-advantaged citizens starve.   Even in ancient societies the wealthy had running water; it was called a slave with a bucket.

What is morally and practically relevant about wealth disparities is how they come about.  They can occur via one of two ways.  Either they exist because of the existence of power relationships between those who control the government, and those who are subjugated, or they exist because of consensual market relationships.  The former is the world of slave societies or more properly those more socialistic.  The latter is the world of those nations more capitalistic.  I use the terms socialistic and capitalistic because there has never been a completely socialist or capitalist society. Cultures and societies veer toward one or the other but often have elements of both.

The modus operandi of nations that move toward a more socialistic society is one of power and violence.  It is to be condemned as unjust and inhumane.  The proper relationship to one another is purely consensual.  Allowing people to freely interact with one another on their own terms, absent force and fraud and allowing them the inherent moral right to the fruits of their own labor is the only position that is morally acceptable.  Let’s make sure the left understands that rights are negative and that positive rights are a logical non-sequitur.

The practical effects of the two types of societies could not be clearer, so we need not spend much time here.  Ask any lefty to name one, just one nation that grew wealthy via socialism.  There are boatloads that grew poor this way but none they can name that grew wealthy.  We all know the history of which types of nations delivered the goods; those more capitalistic than not.

This leads to our final topic: do billionaires (and by proxy, wealth disparities) cause economic growth?  No.  They are a consequent of economic growth as some will be better able to satisfy the needs of consumers than others, in a capitalistic culture.  In a socialistic culture those who get wealthy are better able to navigate the political system and are so rewarded.  They are rewarded, however, at the expense of the rest of the society.  In such a power relationship there is no win-win scenario, only a win-lose one. This is the path that the left would have us take, rather than solve the problems of an already too large a government by reducing its size and scope.

For you see this author may have “no fucking clue what causes economic growth” but actual economic thinkers do.  Material progress is caused by an increase in the per capita level of capital invested.  Capital is simply another name for tools.  More and better tools mean labor is able to produce more.  When we can produce more, we can consume more.  Such a simple concept, even I was able to explain it.  How do we increase our capital?  We do so by limiting the power relationships which take from people the fruits of their labor.  We allow people to freely produce, save, invest, exchange and profit.  In short, we leave people alone and allow a capitalistic culture to emerge that has shown theoretically and historically to be better at delivering the goods.  So, if in a fit of immorality, the left seeks to abolish all inequality or at least the concentration of wealth they will fail to do so and shift its cause from a voluntary market-based occurrence to a politically controlled occurrence and in the process impoverish all of society.

Finally, who are these libertarians running around claiming that the existence of billionaires alone causes economic growth, and in so doing shilling for the wealthy to benefit at other’s expense? The author centers on the Niskanen Center and the Cato Institute, neither of which is particularly radical (and radical change is what is necessary) and have all too often made too much peace with a government too large. Even still it is hard to see where they are making the claim, he says they are.  That said, there are all sorts of self-identified Libertarians who hedge their governmental bets and make moral and political compromise where none should be made.  They have also at times shilled for advantages for the wealthy via government policy.  Is it really a revelation that business people lobby for ways to short-circuit the market? We should not confuse these wobbly ones with those defenders of true laissez faire freedom.  Most of the left falls into the trap of seeing something they dislike (such as a subsidy to business) and labeling it capitalism. Let’s hold them to a stricter definition of terms.  We, especially as people of God, must never compromise our principles.  We must always struggle for the innate right of all humanity to live freely and consensually with one another both as a moral and practical imperative.  Instead of abolishing libertarians, let’s peacefully replace confused thinking with intellectual and moral clarity.