For Our Own Sake Let Them In 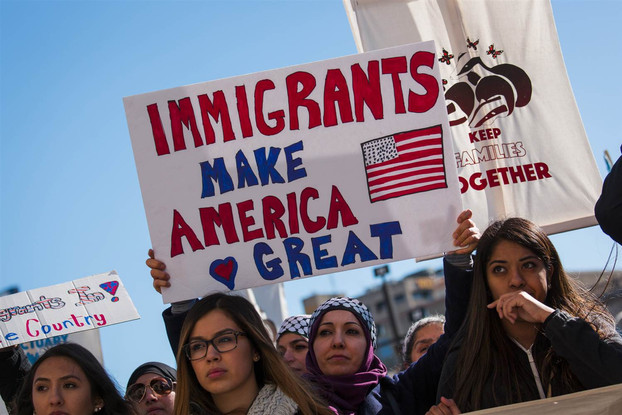 Let us set aside the moral case for letting immigrants in, a case which is unassailable and let us look at the practical case for letting immigrants in.  Study after study shows the net benefits of immigration.  It would stand to reason.  The same things that make free trade an economic positive make the free flow of people an economic positive.  A recently released study indicates, yet again, the positive impact that immigrants bring to the U.S.

A litany of facts also highlight the benefits that immigrants bring.  A complete rundown can be found here.  Some highlights include the fact more than half of all foreign born peoples own homes and are becoming homeowners at a faster rate than the U.S.-born population. Fewer than 1 in 5 immigrants live in poverty and “Working-class, immigrant-headed households with incomes less than 200 percent of the federal poverty line rely less on public benefits and social services than comparable U.S-born households.”

These immigrants add $2 trillion to the U.S. GDP and produce a net positive to state and local budgets.  This is true not least because these people are not asking for a handout, they simply want to be allowed to live in peace.  It does not take a massive government program (which would inevitably backfire anyway) to allow them in and become productive members of our communities.

Especially noteworthy is the fact that unauthorized immigrants are helping to sustain retirement programs because they are paying in with fake Social Security numbers so they will never get anything back out of these programs.  Mass deportations and/or restrictions will tip over Social Security and Medicare even faster in addition to leaving millions of holes in the labor force as Baby Boomers retire.

Let’s also set aside the specious objection that we are at risk from terrorists crossing the border.  If we were to allow all who wanted to come here to arrive legally at ports of entry there would be no reason to cross over deserts or hidden in the false bottoms of trucks.  A simple check at the port of entry of an individual against a terror watch list should suffice.  We could then devote far less resources to illicit border crossings and have them be more effective because the few still crossing over between regular points of entry would be highly likely to be suspect. Focusing on these individuals while allowing those simply looking for a better life to enter is a far more efficient way to deploy scarce law enforcement resources.  Oh, speaking of safety, it should be clear by now that the data speak of a lower incidence of crime among immigrants than among the native-born.

This should be of no surprise, if you think about the nature of immigration and of the character of immigrants.  Today, by best estimates roughly 80-90% of people live within 100 or so miles of their birth. This is not surprising as it is safe to do so.  In fact, the incidence of mobility is less in the developing world than in the OECD nations with greater economic wealth.  It is hard to move, especially long distances.  Money is an issue and so are the cultural barriers that such a move entails. It is a testament to the horrific conditions that people around the globe are faced with that motivates them to move far at all.  Conditions, I would add that are all too often aided and abetted by grossly immoral U.S. policy.

The fact is that immigration is a self-selecting process that brings forth the toughest, grittiest people willing to undergo such hardships.  These are often the most faithful as well.  To leave all that you have known, all your family, friends and culture, to go to a place where you do not speak the language with often nothing more than the clothes on your back is likely a more gutsy thing than any of us could ever contemplate.  They trust in God enough that they are willing to risk so much and endure such hardships to provide for themselves and their families the chance of a better life. We should stand in awe of the types of people who will do whatever it takes to secure a life of decency for their families.

These are the types of people who build nations.  Duh! These are the types of people who built THIS nation.  The flood of immigrants who arrived upon U.S. shores transformed this nation in the 19th. century and produced the greatest explosion of material wealth in the history of… ever.  They literally built all that we take for granted with their sweat, blood and lives.  They did so out of faith that in a nation where you were allowed to arrive freely and not prevented from working freely that they could provide a better life for themselves and their families. I don’t know about you but these are the types of people I want living and working next to me.  Immigrants built this nation, they can rebuilt it from the miserable mess we native-born have made of it.

Can we do a better job of extending the blessings of freedom to all in our society?  Absolutely!  The fact that we have honored our ideals more in the breach is no reason to abandon those ideals altogether.  We should do the right thing and let them in because it simply is the right thing.  That after all is what God asks of us.  But hey, if we can’t do that then let’s do the right thing for our own sake.