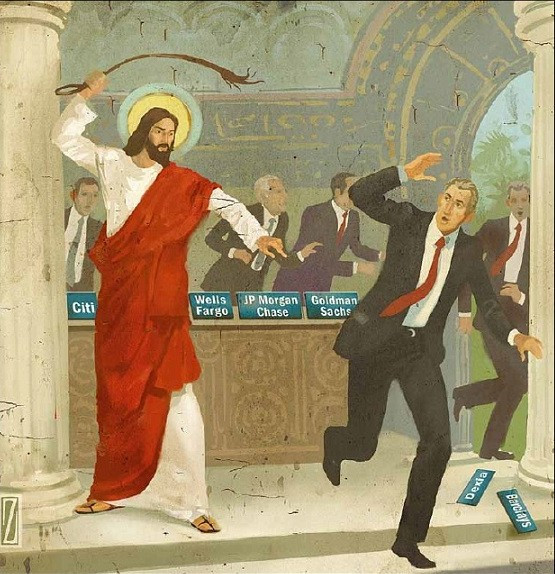 Would Jesus be a central banker? Based on the Gospel and what I know of how the Fed operates, I would have to answer the question, absolutely no.

Jesus teaches us to do unto others as we would have them do unto us.  Additionally, Scripture is full of Jesus teaching us to be wary of Earthly power and the depredations of the wealthy.  These teachings have clear importance for our evaluation of the Federal Reserve.  Let’s take a brief swim in the wonkish waters of central banking.

Simply put the Fed is in the business of inflation.  Inflation is best defined as an increase in the supply of money.  This may or may not result in a general rise in the price level.   In the process this increase in the money supply, by how the money enters the system, causes the boom and bust cycle that the government would have you believe is extraterrestrial in nature.

The arguments in favor of a stable commodity based (gold) money supply are overwhelming but beyond the scope of this post.  For the purposes at hand we need to look at who benefits from an inflationary policy.

It is how the money enters the system that confers maximum benefit on the powerful interest groups that control U.S. economic policy.  The government does not simply print money and distribute it to everyone equally.  If they could magically increase everyone’s cash holdings by say 5% overnight, it would in due course probably raise prices about 5%.  In the process, no one would be any better off vis. a vie anyone else.  That being the case, why would the government undertake such a policy?  Governments don’t act unless someone benefits from the activity, period.

So, who benefits most from an inflationary policy?  Primarily the first receivers of the newly created money benefit the most.  If the money supply is increased, then whomever gets it first has an advantage over those who get it later.  This is because they get the benefit of additional purchasing power before the effects of the inflation have taken hold.  As time goes on prices will tend to rise.   As the inflation ripples through the economy the later receivers will have suffered the effect of higher prices before any increase in purchasing power.

Who then are the first receivers of newly created money?  Investment banks, commercial banks, financial services firms (the mutual fund and hedge fund complex), government contractors and government employees.  Who loses?  Most egregiously those on a relatively fixed income: pensioners; social security recipients and welfare clients.

In this way, the government injects money into the system in a way that benefits the politically connected crowd on Wall Street.  The money then ripples out from there (through the “magic” of fractional reserve banking). Now that the money is in the financial services and investment sector it makes its way to hedge funds and mutual funds and insurance companies selling life insurance and annuities.  This has the effect of pushing up asset prices such as stocks, bonds and other investment products.  This will also tend to push up home prices, particularly at the high end.  All of this benefits the already wealthy.  The top 1% own a third of stocks and the top 10% own two thirds of stocks.

This, of course, does nothing for those who receive the new monies late or never.  Particularly hard hit are pensioners and the elderly who are on fixed incomes.  This is a double whammy on these individuals because this policy pushes interest rates down artificially and they tend to live off interest income.  Which then means they need to take greater risks to generate the same dollar income, which can lead to the loss of their investment capital.

This is a policy which also creates and fuels debt since it makes the interest rate so much lower than it would otherwise be.  This does not, however, help the poor.  Those most able to get a loan and go into debt are the wealthy since they are the most solvent and creditworthy.  This has been borne out by the massive increase in debt by both middle and upper class individuals as well as corporations over the last 40+ years.

That in a nutshell is the core of who benefits from U.S. economic and monetary policy. That these policies benefited this sector of the economy is clear by the increasing “financialization” of the United States economy. The economic effect is that real productive investment was starved at the expense of financial engineering projects that added nothing to the real output of the economy.  That all of this was fueled by an unnatural government intrusion into the workings of the market demonstrates that this was not the result of a true and honest capitalist market.  The moral effect of this policy is uniformly deleterious.  It is nothing more than a naked shift of money from the bottom to the top of the economic pyramid.  It is those politically connected groups receiving something for nothing.  This can only be accomplished, of course, if there is someone receiving nothing for something.

There is nothing compatible with the Gospel in any of this.  It is long past time to drive out the modern-day moneychangers.