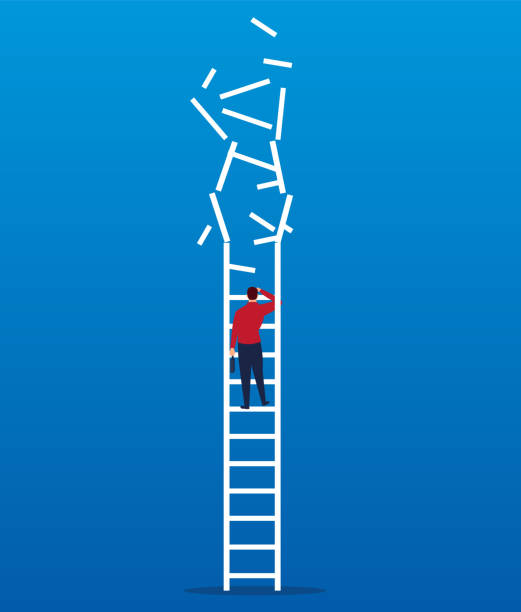 There is a Thing Called Ladder Theology?

Yes, indeed there is a thing called ladder theology. It is a term coined by the late Lutheran theologian Gerhard Forde. He explained it in his seminal 1972 work Where God Meets Man. As you might surmise from the name, ladder theology is all about humans trying to climb rung to rung to get to God. As you might also surmise by the title to his book, Professor Forde does not think you need to do this as God meets us here in the person of Jesus Christ. He is worth quoting at some length:

what is wrong with our usual understanding of the Christian faith[?] We tend to think it has to do primarily with “going up” somewhere — either to heaven or to some kind of “religious perfection.” The Christian faith is often likened to climbing a ladder or, if you will, a staircase. Take, for example, the symbol of “Jacob’s ladder.” In the middle ages it was popular, especially among mystics, as a symbol of the struggle the Christian must undertake to reach perfection…

The difficulty with the idea of the ladder, however, is that it tends to send us off into the wrong direction. It tends to make us concerned with works of pious sublimation; it involves us in the task of ascending to heaven when we should be seeking like our Lord to come down to earth, to learn what it means to be a Christian here on this earth…

The troublesome question of the nature of law and gospel and the relationship between them…it is here, in the question of the law and the gospel, that our incurable tendency to go “up the down staircase” is most apparent… The main trouble is that this “ladder theology” inevitably distorts our understanding of the gospel. The gospel is taken captive by the system and turned into a new kind of law… The gospel comes to make up for the deficiencies of the law. The gospel does not come as anything really new. It is not the breaking in of a radically new age with an entirely new outlook. It is simply “a repair job.” …The net result is that the gospel itself simply becomes another kind of law. Where God Meets Man (pp. 7-11)

Obviously, this is from a perspective that we are saved by faith alone, which contrasts with those, most notably Catholics, that claim there is some external works necessary to secure our salvation. Clearly, as this is a Lutheran professor writing this, he does see that this is a problem for Protestants, even Lutherans. Also, obviously I see this as a problem because I agree with Forde that turning the Gospel into just another law distorts what God is saying to us and leads us astray from the truth that He has communicated to us.

The path astray often looks like this; first you start to think that you have to follow some sort of law or rules to secure your salvation or climb a ladder as Forde puts it. Then you begin to ponder what sort of standard you must meet to work your way into worthiness of God. Right away you realize that God’s standard is perfection. This leads you likely to deem those preaching this theology of works, or ladder theology if you will, of hypocrisy, since they are clearly not meeting this standard. For the record these preachers are not hypocrites, they are simply human, it’s the theology that sucks.

If that does not sour you on the Gospel as being good news, you will likely begin to look at yourself as an unworthy hypocrite because you too are unable to meet this standard. Cognitive dissonance sets in and you either meet the standard set, in this case perfection, which is impossible, or you chuck the whole standard and drift away from the faith altogether.

You may drift all the way to an explicit atheism as I did or to its functional equivalent in which you have no relationship with God at all. This is certainly not the path for everyone; however, it is the path for millions and millions of former Christians who have given up believing that there is any good news to be heard about Jesus. Polls tell us that most who leave the faith do so because they have become so disenchanted.

All of this because there is a misunderstanding of what God is really saying. We have, as Forde says, bought into an “absurd theology”, the notion that anyone, even Jesus can buy off God, or that we can be certain that Jesus has paid enough or that if God is paid off, how can we say we have been forgiven? (Where God Meets Man pp. 11-12).

The description Luther offers is God’s grace poured out into the very bottom of our souls, which then explodes outward into a response toward the world that changes both ourselves and the world. In short, we begin to see doing good things as a response to God’s gift, not as a means of getting Him to give us the gift. This is what is meant when Paul says “For we hold that a person is justified by faith apart from works prescribed by the law. (Rom 3:28). All you need is to believe. Now that is truly Good News!

Who better to explain this in modern terms than the great mystic Linus? Yes, Linus and the Peanuts gang laid it all out in perfectly clear fashion. The very fine author Caitlin Flanagan, in a wonderful piece published last year laid out the enduring power of A Charlie Brown Christmas. It is well worth the read. In it she offers a terrific juxtaposition between this story and that of Rudolph (she rightly pans that story here). Rudolph as we remember, must go on an Odyssey like journey overcoming great odds and trials, all after being unmercifully rejected by his community, even his own family. In so doing he earns his redemption and his place leading Santa’s sleigh. In short, he performs a series of works.

At which point Linus quotes from the King James version of Scripture, Luke Chapter 2: “And there were in the same country shepherds abiding in the field, keeping watch over their flock by night. And, lo, the angel of the Lord came upon them, and the glory of the Lord shone round about them: and they were sore afraid, and the angel said unto them, Fear not: for behold, I bring you good tidings of great joy, which shall be to all people for unto you is born this day in the city of David a Savior, which is Christ the Lord. And suddenly there was with the angel a multitude of the heavenly host praising God, and saying, Glory to God in the highest and on earth peace, good will toward men.”

At this point Charlie Brown gets it. He has heard the word of God clearly expressed and he simply believes, no works needed, no trying to manipulate God or anyone else. Welcome home Charlie Brown.

All we need to be welcomed home is to simply believe. Hear the good and gracious word of God, simply believe that God is telling us the truth, and be forgiven, no matter your past. Let the grace of God pour into your souls and explode outward. So, ditch the theological ladder and stop trying to get to God, for there is no need, He is Emmanuel (God with us). Doing this will turn Elvis’ plaintive question on its head, everyday can be like Christmas.