Death by A Thousand Divisive Cuts 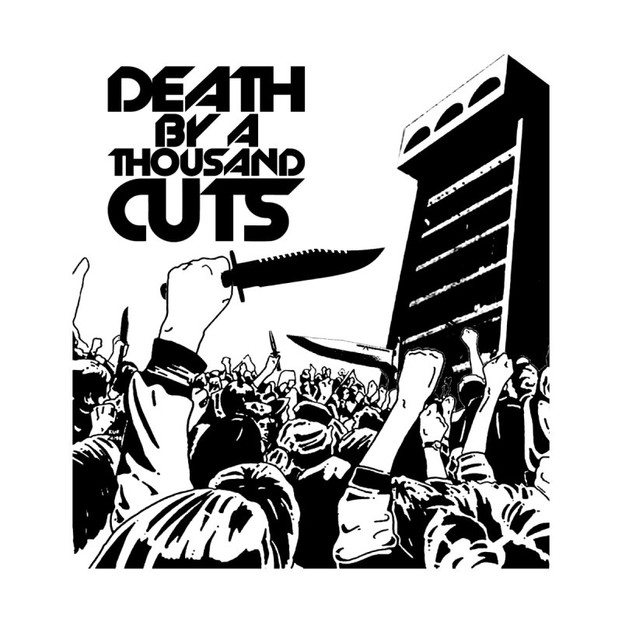 Labor Day has come and gone, so that means that it is time for another session of Midweek programming at church.  This fall we are discussing the book Love Without Limits: Jesus’ Radical Vision for Love with No Exceptions.  To start off the discussion, the Pastor leading the class asked “is society more divisive than it has been in the past?”  Most thought that it is, some disagreed, arguing that past eras were more divided than today.  My answer to the question are we more or less divided than previously is yes…and no.

We are not more divided today than in the past if we look at some of the momentous events that have occurred in U.S. history.   The American Revolution, the Civil War, the industrialization of the country, 19th. century immigration, Vietnam, Civil Rights and Watergate, all created far more divisiveness than today.  That’s just off the top of my head.  These eras and events caused serious and usually violent conflict to occur within U.S. society.  The aftermath was bitter, and it took a long time for the wounds to heal, in some cases they have not healed even to this day.  Compared with something like the United States Civil War, the consternation surrounding the Trump presidency looks pretty tame.

On the other hand, we are living in a more divisive time because of the breadth of the division.  I mean almost EVERYTHING is political and is contested in the political arena. Obviously, the big issues are, as always, contested; foreign relations, military policy, federal spending and debt, climate policy, etc.  But also politicized are, just to name a few areas; light bulbs, how much water is in your toilet, sexual relations, workplace conditions.  Even pants pockets are political as I pointed out awhile back.  All of these issues and much more find themselves in the political realm.  It is their placement in the political realm that creates the division.

Politics is, by definition a win-lose proposition.  You vote or the party in power makes a ruling and that is it.  At this point individuals have three not very appealing choices; they can submit, fight or flee.  All of these are a narrowing of choices beyond what is a legitimate way to treat other human beings.  The more areas of our lives that end up in the political arena, the narrower our choices become and the more rancorous the discourse.  Since politics is a win-lose scenario the stakes become ever more elevated as society becomes ever more politicized.  This results in the creation of a take no prisoners, gouge your opponent’s eyes out Texas cage match atmosphere.

Now the specious claim will arise from the statist quarter that “government is what we do when we get together”.  Bollocks! Church, bible study, ministry service, charitable works, work, commerce, school, neighborhood associations, family and friends’ social events; these are what we do when we get together.  Getting together via the government is like congregating in a prison yard, only with less charm. The only reason government exists is to exert social control over people; to get you to do what someone else wants you to do or to stop doing what someone else thinks you ought not to do.

Getting together is voluntary, by definition.  Government is coercive, by definition.  By increasing the amount of coercive energy in society you concomitantly increase the level of division in society.  So, while the truly momentous events in our history may not be equaled by the controversies of the day, at least during many of those eras there was a larger realm of voluntary cooperation into which you could retreat.  Yes, Vietnam was terribly divisive but there were lots more things you could talk about that had nothing to do with this.  There is increasingly no place left to hide.  Even sports are political, so good luck finding something innocuous to discuss.  And, no it’s not the weather what with climate change everywhere.

Fortunately, the world of the double thank you is still the one that predominates in our world, thank God! This type of interaction is still the one that reflects our lived experiences on a day to day basis.  We need to build on that.  Seek out this world, the world of the win-win.  Point it out to those you meet that are hyper-politicized.  Show those types of people that there is a world beyond the divisive political realm that truly is different and better.  At the same time point this out to those that are despairing of our ever-broadening social division.  If we don’t build on what is left of the world of voluntary cooperation the cumulative effect of the corrosively divisive atmosphere will make it seem like 1861 all over again, and if we are not careful it could actually blow up into a conflict of that magnitude.  A peaceful sojourn through this world must always be the path for the people of God.