Capitalism & the End of Slavery 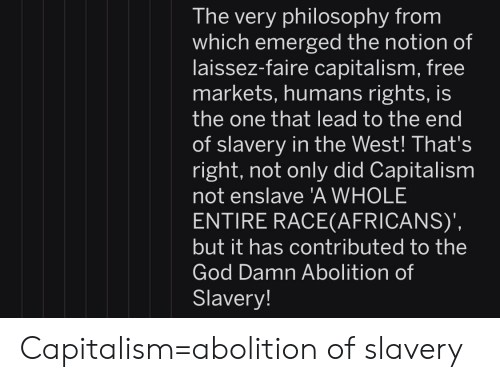 Since the resurgence of socialism as a “respectable” ideology it has been fashionable for socialists to argue that capitalism = slavery. Socialists argue that the founders revolted against Britain to protect and expand slavery. In fact, they argue that the United States grew wealthy primarily, if not solely because of slavery. A New York Times reporter Nikole Hannah-Jones laid all of this out in a New York Magazine piece. It is an ongoing project that goes by the name of The 1619 Project. Ms. Hannah-Jones uses the date 1619 because this is the date that slaves first arrived in the colonies.

Many scholars have criticized this work as incoherent. I agree with this criticism as the piece is simply bad history, however well intentioned. The ultimate genesis for these types of ideas comes from Marxist ideology. Marxists argue that capitalists exploit workers because workers do not receive all of the product of their labor because capitalists take a portion as profits. I dealt with this argument recently. The core rebuttal to this argument is that workers want their wages now rather than wait to get it later in the form of profits. The utter nonsense of this idea is that labor is apparently “entitled” to the full value of the product sold beforeit is sold and before anyone knows if there will be a profit. As it stands under capitalism the worker gets a wage that reflects their contribution to the finished product (as measured by productivity) no matter whether the capitalist makes a profit. If you are like most people you want your wages sooner rather than later and you want it in the form of wages not speculative profits. The socialist arguments can be found at this site in section C.2. A succinct rebuttal of the Marxist labor theory of value can be found here.

It is important to review these ideas because they are at the heart of why people like Nikole Hannah Jones equate capitalism with slavery. They start from a position that all capitalist economic relationships are exploitative therefore all capitalism is just another form of bondage. Since they are incorrect theoretically about the economics, it is no surprise that they then mangle the history. However, my point here is not to rehash wonkish aspects of Marxist economic errors or to dive deep into the 1619 Project fallacies but rather to look at the big picture of capitalism and slavery.

We need to set aside, for purposes of this discussion the hideous personal costs of slavery as an institution. It is virtually unfathomable today for us to consider the hardships slaves endured; the rapes, beatings, family separations and on and nauseatingly on. We need to take a somewhat cold economic perspective at slavery as an economic institution. There is some controversy as to whether slavery was viable from an economic perspective. A huge controversy erupted in the mid 1970s when two authors made the case that it was a viable economic model and may have in fact bestowed some economic benefits on slaves themselves. I don’t think they made their case. It was certainly true that many slave owners profited from the institution but that does not mean that the slave economy on the whole prospered. In fact a good argument was made that only by pushing the costs of slavery onto the rest of society made the slave holders profits possible. It is, however, this political dynamic that allowed slave holders to foist their costs onto the rest of society that helped slavery endure for so long. This has always been the case, all the way back to ancient societies.

The economic reality of slavery is that for many millennia the use of human power, in the form of slaves, made sense. This is especially true given how society subsidized it, as was just discussed. Many objected to slavery on moral and religious grounds, but most had little economic incentive to change the system. The whole of the economic system itself changed very little from the dawn of human societies until about 1750, as I reviewed here. After 1750 EVERYTHING changed: 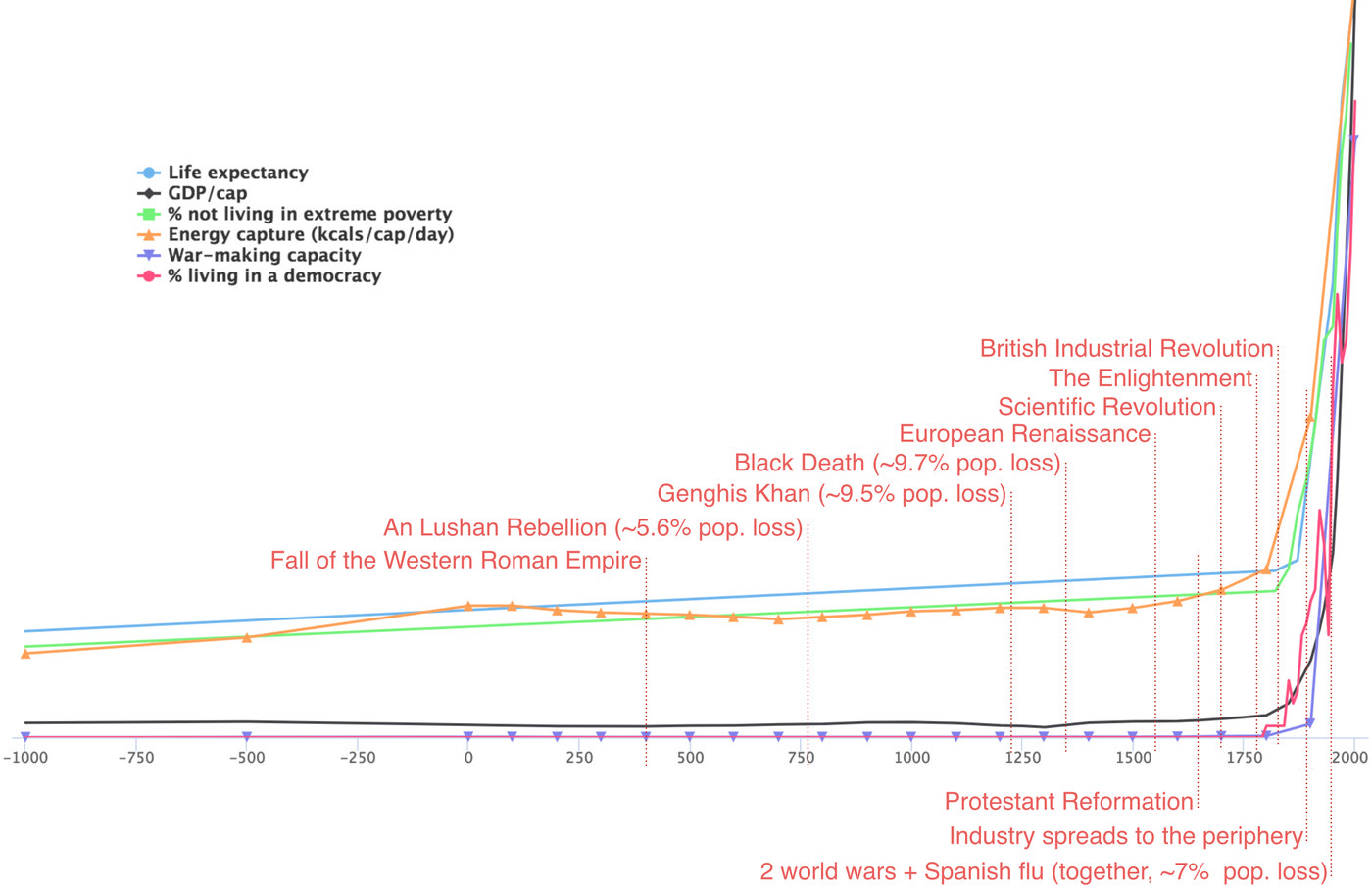 So, what changed after 1750? The arrival of capitalism, that’s what. 1750 is generally considered to mark the start of the Industrial Revolution and the birth of modern capitalism.

The Industrial Revolution, for the first time in human history, brought the ability to maintain a growing sustainable prosperity. It achieved this by the development of non-human machine power (mainly coal at first), that created a substitute for and improvement in human and animal power. For the first time humanity could produce more than they ever had previously and do it without the near complete reliance on human and animal powered production processes. This created a situation where for the first time in human history there was less economic incentive to maintain slavery. The portions of the economy still dependent on slavery (mostly the agricultural sector) became less and less important to the overall economic output. In the fullness of time, even the agricultural sector would fall under the logic of machines doing most of the grinding work. In the end the economic logic is inexorable; it is simply too efficient to use free labor equipped with machines than to employ slaves. The closest we have to a laboratory experiment in the modern capitalist/slave economy comparison is the antebellum United States. In the competition between the North and the South it was not even close. The arrival of modern industrial capitalism fueled by the ideas of limited government and a more or less laissez faire policy reversed the economics of a slave society and created a monetary incentive to end slavery.

It would be nice to think that the moral case against slavery would be enough. True enough, there were many who wanted slavery abolished regardless of the economic cost. The sad reality, however, is that conviction usually follows the money, or as one wit said, “more money fits best with most worldviews”. This phenomenon can explain the obvious hypocrisy of people like Jefferson and Washington. They intoned about liberty for all, but their pocketbooks were tied to slavery. This was true for much of society prior to 1750. It is only after this date that we see a rise in a coherent and attractive anti-slavery and abolitionist movement that made economic sense to many. We can bemoan the pecuniary motives and the economics of the anti-slavery movement for not being pure. Or, we can celebrate the arrival of a system, powered by a humane ideology that freed humanity from the economic need to enslave one another while lifting masses and masses of people out of the awful muck that marked humanity’s first 10,000 or so years at the top of the food chain.

So, tell the Marxists to pound sand next time they prattle on about “exploitation”. Capitalism beats slave labor every time. Karl Marx call your office!