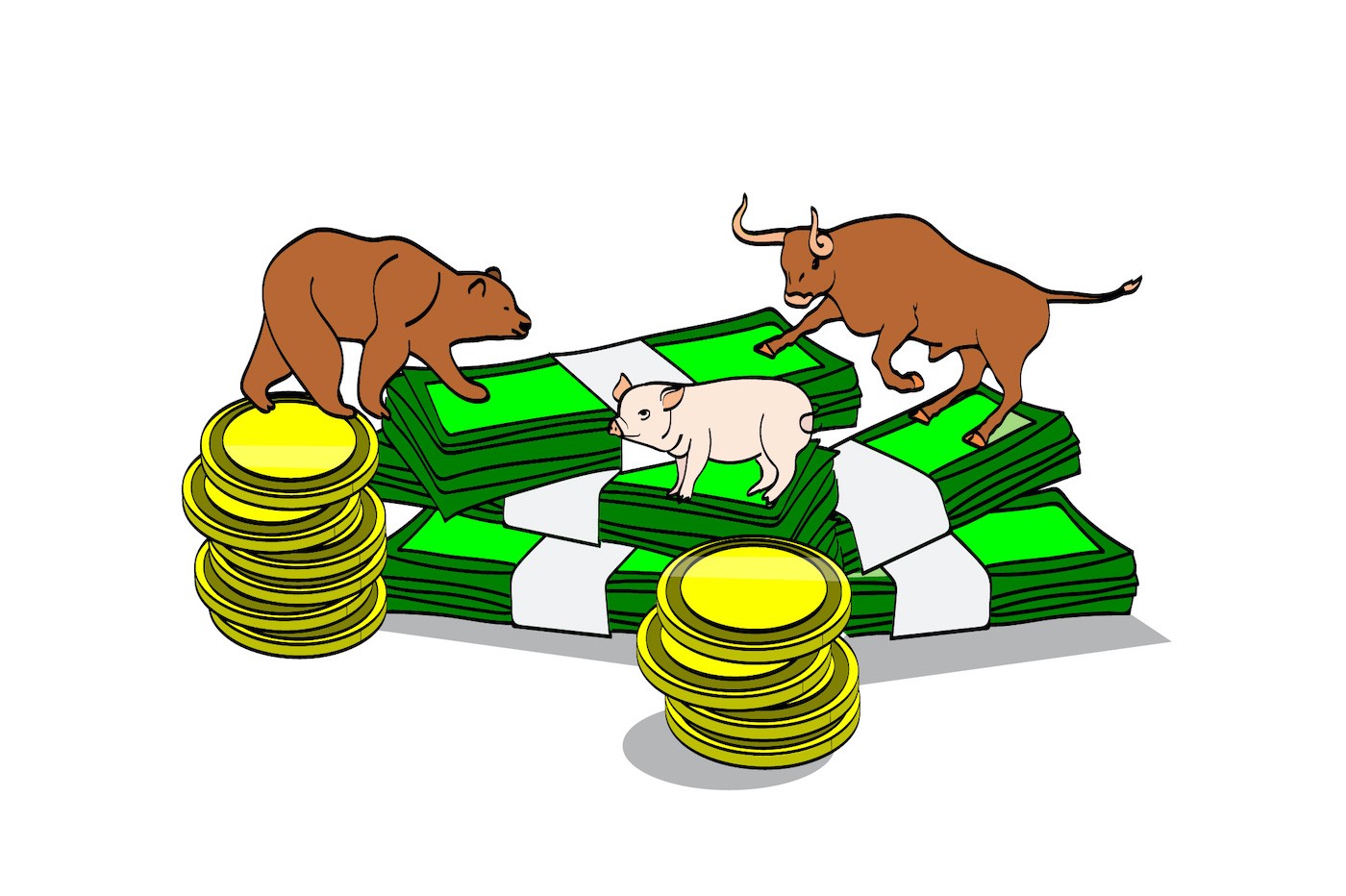 There is an adage around Wall Street that says, “bulls make money, bears make money, but pigs get slaughtered”. We saw all three on full display this week as a drama unfolded around the stock of a company called GameStop. Those of you around in the 90s may remember this outfit. They are a chain of strip mall-based video game retail outlets that sold and rented video games and related items. This is not a business model that has worn well over the years, even prior to the pandemic. Recently they attracted attention from an investor who bought his way onto GameStop’s board and is seeking to take the company in a more modern direction. This development was well received, and the stock price rose.

However, a hedge fund called Melvin Capital thought that this effort would not pay off, so they sold the stock short. Selling short amounts to borrowing the shares of stock, based on the current price and then buying them back at what is presumably a lower price and pocketing the difference. This is a risky move as there is only a limited upside but unlimited downside as the price can go up without stopping. If the stock starts to rise a short seller either will have to buy back the shares and take a loss or put more money into their account to be able to make good on what they may owe. Well, some day traders who hang out on a message board run by Reddit got a hold of this and concertedly started buying GameStop stock and options, which had the desired effect of pushing up the price of the stock. The short sellers then had to start buying back some of the stock, further pushing up the price. This phenomenon is called a “short squeeze”. In the end Melvin Capital had to pledge some of its other assets to some lenders in order to cover the short bet they had made. This pleased the Reddit crowd to no end, who explicitly wanted to punish the hedge fund.

All of this resulted in the hedge funds and its assorted associates to cry foul and go on the financial news networks and cry about how this was unfair and needed to be stopped. At one point Reddit pulled the plug on the “offending” group as did the trading app Robinhood, who stopped allowing new positions in GameStop and a couple of other similarly situated stocks. There is some legitimate question as to whether the pressure put on Melvin Capital was all from retail, small-scale traders or whether institutional money jumped on to make a quick profit. Either way it is easy to not shed tears for a large hedge fund losing its shirt.

All this brings up a question many, especially on the hard left, have asked: why do we need a stock market? The first reason is that this is one keyway that businesses raise capital to grow. Yes, most trading is not an Initial Public Offering, but rather shares being traded by secondary buyers and sellers. However, no one would buy shares initially if they could not later trade them, one logically follows the other. Also, the stock market is designed to provide honest price discovery about the relative merits of owning part of one company over another. It also provides a market for corporate control and ownership, which helps keep corporations sharp about running their operations prudently.

This is how it is supposed to work, and likely would in a truly free market. However, due to the ministrations of the Federal Reserve this has become more of a casino and less of a market. The Federal Reserve, via money creation has completely distorted this process, and has since Nixon destroyed what was left of the gold standard in August of 1971. The winners from money creation are the first receivers of the new money; banks, investment houses, hedge funds, insurance companies and of course government contractors and employees. They get the extra purchasing power of the money before the reductions in that purchasing power hit the rest of the economy. The average worker gets little if any real increase in their income and in fact has been treading water for the last 25 years. Worse than that this process diverts actual resources to Wall Street and away from real businesses that could use these resources to expand their production facilities and create sustainable jobs and an increase in real wages for workers. In short, this shifts wealth from the bottom to the top. I outlined all this here and here.

All of this is patently immoral, economically damaging and THE reason why the stock market and Wall Street play such an outsized role in the economy. One of the downstream effects of this process has been to create a “get rich quick” mentality, highlighted by episodes of financial manias. This is the inevitable downstream effect of the pollution of the financial headwaters via the central bank. It is a mentality born of easy, made-up money that has been created out of thin air. The reality is that money does not equal wealth. If the creation of money was actual wealth, we would have eradicated all poverty long ago. Only the production of more goods and services is the path to real material prosperity, and the creation of made-up money does serious damage to this process of real wealth creation. It is the height of arrogance and indeed blasphemous to think that humanity can create something from nothing; only God gets to do that. All that this mentality does is make people seek the cheap, easy way out. Just get me my made-up money and I don’t care what the long-term consequences are. It should surprise no one that the politically connected classes are at the head of this money receiving line. Those who are last in that line are rightfully embittered and likely to seek more authoritarian “solutions” to resolve problems created by too much political authority in the first place.

This phenomenon goes a long way to explaining the desire of traders to grab a quick profit via an unsustainable process such as using a chat room to pump up a stock. It also explains why many of these traders are hell bent on simply punishing hedge funds, even if it means they don’t make a profit themselves. In the end there will likely be some traders who step out with a profit, but most will lose their shirts. It is likely that those who profit now will lose that profit and much more later; that is the effect of the get rich quick mentality, that it usually results in failure. The hedge fund complex will also survive this “onslaught” of barbarians at the gate. Melvin Capital may take a hit or be bought out or go under, but the 1% will carry on, at least for now. There is an end game for all of this, and it is not pretty. I know the “Masters of the Universe” think they can continue until eternity arrives, but they cannot. The end game is the complete breakdown of the monetary system of a grotesquely distorted U.S. economy. The financial mandarins are quick to point out that the U.S. has reserve currency status, and that confers immunity from such a damaging development. They are quite a bit more reticent about who had this status before the United States, because then they would have to admit that this status can and has changed a lot throughout history.

None of this is etched in stone. True, history does not offer many examples of nations and empires this far gone down the road of financial insanity ever recovering, but it is possible. Where there is possibility there is hope. What we need is the immediate dismantling of the Federal Reserve and the return to a market-based commodity money (presumably gold). This would end the cycle of immoral inflation that is so damaging to the economy in general and the working class especially. This would force the government into a situation whereby they would have to live within their means as the Fed could not print up money to cover Uncle Sam’s bar tab. This would also force into the open the real cost to society of the welfare/warfare state and allow citizens the ability to vote for or against policies based on accurate information. I am not suddenly a fan of democracy, but accurate information would likely produce somewhat better results. This would allow for the return of an economy that more efficiently produced more goods and services that consumers want and need, rather than useless financial machinations. It would also produce a vastly more just economic order and rising real wages. This would not be an easy transition but one that would take place much sooner than naysayers would predict.

We went from feudalism to mercantilism to capitalism and are now moving back again. If we made the move to a more just capitalist order once, we could do it again. If the spectacle of so many pigs getting slaughtered in this latest mania tells us anything, it should tell us that the underlying cause is a wholly immoral and economically damaging interference in the affairs of people by a ruling class without conscience, decency or morality. As always, let us pray that the people of God can lead the way back to a more just and humane world.