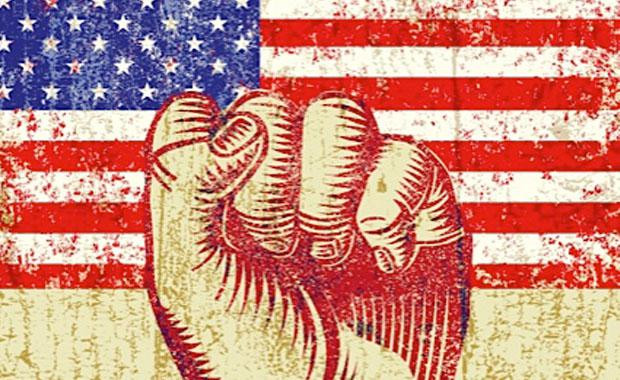 The United States was founded upon a truly exceptional set of ideas: The  notion that people were created equal, at least before their Creator, that they had the right to be free, autonomous individuals and that government should only exist to defend these clearly defined rights and do little else.  It was a philosophy deeply rooted in the work of thinkers such as John Locke.  The American Revolution was part and parcel of the Enlightenment philosophy that raised reason to such an exalted place in human thought.   All of this is wonderfully recounted in the Bernard Bailyn historical masterpiece.

Whatever we as Christians think about the use of violence to achieve U.S. independence, we can recognize and indeed marvel at the thinking that animated this struggle against the British.  We should also be able to separate the ideas from their implementation.  Obviously the Founders fell short, in at least two key areas; the treatment of African slaves and Native Americans. Additionally there was not full equality for women and a host of ways big and small that the U.S. fell short of the ideal.  The lack of consistency in the lived history of this nation can and must be separated from the underlying philosophy that undergird its founding.  How would we like the Gospel to be evaluated by the way we live it?  No, I didn’t think so.

In fact, there have always been those who never really bought into the founding ideals..  These are the ones who wrote the Constitution, which was really just a reaction to the radicalism of the revolutionary ideals.  They wanted to grant special privileges for favored political groups and regions and on again-off again resistance to newcomers, just to name a few.  Yet for all of this the ideal was more adhered to than not.  This was truly a unique place where you could come, be left alone and succeed or not according to your talents.

The results remain an ahistorical amazement.  No nation ever came as far as fast and achieved the level of material prosperity that the U.S. did, particularly in the 19th. Century.  One shudders to think of how much more prosperous we could have been if we freed ALL of our citizens to participate according to their God-given abilities.

The change in all of this came in the aftermath of the Civil War.  The win by the North, obviously good for the ending of slavery, set this nation on a course of a centralized and powerful national government.  This is well told in the book Emancipating Slaves, Enslaving Free Men.  While the forces of laissez faire still won more than they lost, there began a slow erosion of support for the founding principles. This was led by a movement of pietists who held the position that Jesus would not return until the Kingdom of God was established on Earth for a 1000 years.  This is known as Post-millennialism.  It therefore became necessary to use the power of the state to eradicate sin and usher in this golden age.  They were opposed by the more traditional liturgical churches; Catholic and Lutheran who still held to the more laissez faire doctrines.  The pietists were centered in the Republican party the laissez faire contingent in the Democratic party.  That is until 1896 when the ultra-pietists led by William Jennings Bryan captured the Democratic party. Since then the U.S. has been saddled with two statist parties that both, in their own ways, sought to grow the government.  This is recounted in the recent history of the Progressive Era.  The age of anything being exceptional about America was over.

Within 2 years of that 1896 election the U.S. went to war with Spain and acquired an empire.  Then came the “Progressive Era” which saw a large growth of government, followed , not coincidentally by U.S. entry into the First World War.  Government continued to intertwine itself around the society in the 1920s until the government blew up the economy in the Great Depression.  The New Deal quickly followed, then, also not coincidentally the U.S. involvement in the Second World War, then global dominance, which I have previously outlined, with all the attendant moral horrors.

At this point neither Left nor Right care a whit about the founding ideals.  They do not believe in or work toward limited government, international peace or respect for civil liberties and human rights, at home or abroad. Both sides demand slavish devotion to the State, offer the coercive power of government as the means by which we may obtain economic prosperity and physical safety.  Mostly the populace sheepishly goes along, including, sadly most Christians.

This erosion has continued until now there is a remarkable lack of belief in any of the founding principles.  The Right talks about low taxes and limited government but practices massive increases in spending and lavishing privileges upon their favored constituencies.  The Left speak of defending civil liberties and human rights but supports the warfare state assiduously, endorsing the surveillance state and using the tools of power to wage imperial war.  Both sides feel totally at ease with the growth of government to serve what they see as the legitimate needs of the state.

It has gotten to the point that neither the Left nor the Right even care about free speech.  Oh, they care when their free speech is infringed upon or when their side is shouted down during a speech.  However, when it is the other side being silenced, then it is justifiable in the name of stopping hateful or violent speech.  Is there any concept more at odds with the American experiment than the notion that opposing ideas are in and of themselves violent?

All that remains is the next great domestic or international crisis; the next real threat of major war or the next economic meltdown.  I do not know which, but I suspect it will be economic implosion.  At that point the absolute elimination of belief in the founding principles will allow for the rise of a person or party that will explicitly abandon those ideals in favor of a clearly and openly authoritarian state. Yes I know the Right thinks Obama was the end of the world and the Left thinks it is Trump.  If you think either are the worst take comfort in the knowledge that it can and will get worse, much, much worse.

It does not have to be this way and there is always hope.  If we insist upon returning to the founding ideals and insist that they apply to ALL people then we can still turn this around.  If even just a sizable portion of the Christian community begins to insist upon this as a political goal the impact would be dramatic.  No matter what we think the odds are of succeeding, we must try as children of God and followers of Christ.  Let us wage unceasing peace and freedom in His name; that would be truly exceptional.