A Positive Balance of Terror 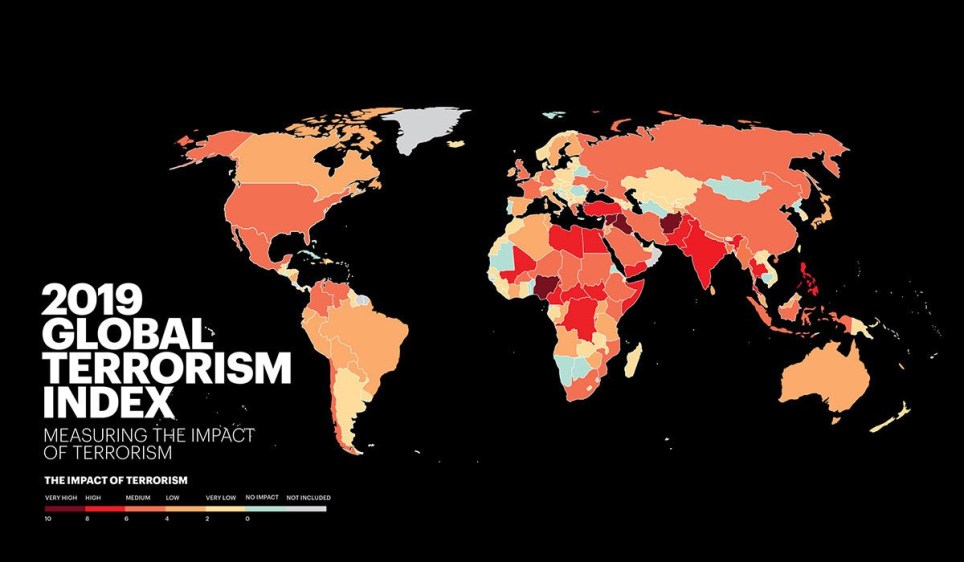 Donald Trump is extraordinarily concerned with the U.S. balance of trade, more specifically the U.S. balance of payments. This is nonsense, of course, as I have previously discussed. The notion is that the nation needs to have a positive balance of trade to be prosperous. I would suggest that in one area we have a very large trade surplus; the area of terror and violence. This nation is a large net exporter of terror. The United States exports much more terror than it imports. In fact, most of the terror committed in this nation is homegrown. For purposes of this discussion, we can set aside the very real incidence of violent “blowback”, the process by which U.S. imperial actions have encouraged violent reactions. There is obviously no moral justification to commit intentional acts of violence against anyone, even under a “just war” standard. So, while blowback may in fact be a reason for violence perpetrated against the United States, it is in no way a justification.

All that being said, the U.S. exports a massive amount of terror around the globe. In fact, the United States is the current reigning champion proponent of violence and terror on the planet. This stands in stark contrast to the claims of the entire establishment of this nation. Claims are usually made that Iran, or perhaps North Korea fit this description, but the facts speak otherwise.

First, look at how many and where the United States has a military presence. The United States has over 800 bases in at least 70 nations around the globe (the total may be higher depending on how you define a base). By comparison, Britain France and Russia have 30 bases combined. These aren’t just passive bases either, between 2015 and 2017 the U.S. conducted military operations in 76 foreign nations. The map below lays out the scope of the U.S. empire. The sick joke is that this map proves that Iran wants war with the U.S.; why else would they place their country so close to U.S. bases. 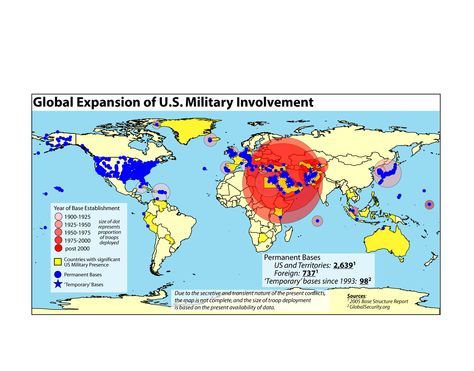 It should be clear that these military actions are not in any way justified. None of these nations nor any of the nations against which the U.S. has taken action are a threat to U.S. territorial integrity, U.S. sovereignty or U.S. transit in international waters. These being the only recognized justifications for the use of defensive military action (we set aside the Christian objection to any violence). Therefore, any military action and the resulting casualties constitute aggressive action and therefore war crimes. Wars of imperial choice in order to foster global hegemony are not allowed under any civilized standard.

Second, in order to comprehend the magnitude of the violence that the U.S. exports we need to consider the financial, diplomatic and material support given to odious regimes around the planet. The United States is the largest supplier of military aid of any nation on the planet. The U.S. supplies some sort of assistance to over 150 nation around the globe. This totals at least $50 billion per year. A drop in the U.S. budget bucket, but an amount that is significant to the nations receiving aid.

Who are the recipients of this largesse? Such stalwart upholders of human rights as Israel (on the list of shame for their apartheid treatment of the Palestinians), Egypt, Iraq, Jordan, Afghanistan and Pakistan. These are just the top recipients. Others include Uganda, Nigeria, the Philippines, Columbia, and South Sudan. Every one of these nations has a spotty (at best) human rights record and is using these funds to help subjugate a portion of their populations.

These funds do not even reflect the arms purchases that the U.S. government facilitates. The U.S. is the clear leader in global arms sales. The Saudi government is the top purchaser of U.S. weapons, buying 1 in 4 U.S. weapons. These arms sales are and must be by law approved by the U.S. government, so they have the official diplomatic imprimatur of the United States, they are part and parcel of U.S. policy.

The list of U.S. supported military actions around the globe is beyond the scope of this post. Just to name a few of the most egregious and imprudent: the overthrow of the Iranian government in 1953, the overthrow of the Guatemalan government in 1954, Vietnam, support for right wing Central American governments in the 1980s, Iraq 1990; Bosnia in the mid 1990s, Iraq 2003, Libya 2011, the drone war, and the Saudi intervention in Yemen. All of these and many more involved the U.S. in the active support of the repression of human rights and the subjugation of human beings.

This record makes the human rights abuses of nations like Iran pale in comparison. It is not that other nation’s human rights abuses are less morally objectionable, it’s just that they are dwarfed in scale by that of the United States. In addition to this, it is clear that even when we factor in the horrific attacks of September 11th. the U.S. has inflicted far more deaths than it has suffered. As was stated at the beginning, a large positive balance of terror. It is demonstrably the case that the U.S. is the world’s largest proponent of global terror.

The establishment will claim that I am suggesting moral equivalence. Indeed I am. ALL violations of international law and human rights are crimes against humanity, other nations are of course guilty of this. However, the United States falls under the same standards as the rest of the world; standards which it fails repeatedly. We cannot control other nations and their sorry record regarding human rights but neither do we have to participate in these abuses.

This record of exporting violence has not made us safer but has made us materially and more importantly morally poorer. We have the ability to once again become a nation among nations and seek only peace and free enterprise. The question is do we have the will. We can do our part by calling out this nation’s sorry record of being a net exporter of terror and violence and call for it to immediately end.