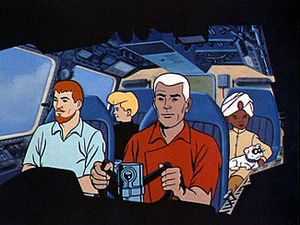 I don’t normally comment on matters of taste and I am not going to now.  It is, however, important to look at our culture and examine the messages it is sending out.  Often we don’t even realize the damaging and immoral themes that are being presented. I have discussed this before in a different context.  Many of the images and messages from our culture have been and continue to be racist, sexist, violent and blindly supportive of the state.  Unless we are aware of these messages and how they portray our  culture we are not prepared to offer a counterpoint.  This is especially damaging as it is our young who fall prey most often to these awful images and messages. In this post I want to examine two shows from my childhood that reinforced the worst tendencies of U.S. culture, especially as it relates to foreign policy.

First is My Three Sons.  This is the heartwarming tale of a widower who is raising three sons with only the help of a male relative.  They are an average American family who find themselves in all sorts of hijinks and humorous situations.  All comes out well by the end of every episode as a lesson in civics and good living is delivered.  Just good ole American values right.  What’s to complain about here?

Well if we look beneath the surface we can outline a darker tale.  Steve Douglas, the main character, played by the then well-known Fred MacMurray, is identified as an aeronautical engineer.  This of course has to do with the development of spacecraft and aircraft but also missiles.  This would obviously play well in the 1960s given the space race, the drive to land a man on the moon.  It also dovetails nicely with the growing use of U.S. military power, particularly in Southeast Asia and the development of inter-continental nuclear missiles.

So Steve Douglas is a part of the military-industrial complex and a tool of the U.S. war machine. As they would have said back then, swell!  It is clear he is connected and a part of this establishment by some of the storylines. In Season 5 Episode 7 he is tasked with escorting a Congresswoman who is in town.  This doesn’t happen to a clerk working in a civilian field.  Earlier in Season 4 episode 15, he is working on a top secret project that creates all sorts of hilarity in the Douglas household.

The problem with all of this is that it makes all of this kind of activity normal.  Steve Douglas and his family are safely ensconced, first in the Midwest, later California and oblivious to the work that the head of the household engages in.  They have all the blessings that a free society can offer and the highest standard of living in the world with an almost limitless future.  Meanwhile, dear old dad works for a defense contractor that helps to threaten the continued existence of the planet and to assist in spreading death all over the globe.  This is a perfect microcosm for the reality of U.S. culture.  We sit here in our homes and communities safe from the outside world while the government bombs many parts of the world into dust.  We are able to ignore this reality, tune our media to something else and to watch programs that make all of this seem normal.

The other show that is prominent in my memory is Jonny Quest.  This is even worse than My Three Sons.  This was a cartoon that chronicled the adventures of a young boy, Jonny Quest, who travels with his scientist dad, Benton Quest on globe hopping adventures.  These adventures always involve the engagement of dark forces, evil scientists and the like. Dr. Quest is explicitly an agent of the U.S. Government and is willing to take any action, however violent to complete his mission.  He is assisted by his bodyguard, the ever violent Race Bannon.  To complete the offensiveness is the character of Hadji, who wears a bejeweled turban and a Nehru jacket and is always ready to be the servant to the white guys.

Again this show serves to make all of this kind of violence  (to be clear, Jonny Quest was one of the very few if only cartoons where people actually were killed) utterly normal and in fact cool.  To be in the employ of the government as a secret spy/scientist becomes the sine qua non of U.S. citizenship.  This show was the cartoon equivalent of candy cigarettes, it was training wheels for accepting the worship of the military as a noble thing.

Now I know all this seems a stretch, which is why I titled this a Cultural Rant.  However, I would argue that culture is a reflection of the values we hold and is also a means by which certain values are transmitted, especially to our young.  This continues even today.  Do you ever see a businessman favorably portrayed? Is the U.S. military ever criticized?  Are not spies and agents venerated in exciting tales of valor?  We all know the answers to these questions and should quickly see what they say about us as a society.  Shows like this are only a small part of the problem.  Cultural norms, like saluting the flag, the national anthem before sporting events, jet flyovers before football games are all more culturally telling and damning than television and movies.

I am not saying we all have to lead sterile cultural lives.  I am still a sucker for a good gangster pic and enjoy a spy thriller as much as the next guy and you can still enjoy sporting events.  I am, however saying that, as Jesus instructs us we must be as wise as serpents in this fallen world.  We must clearly understand how cultural elites attempt, often successfully, to mold public opinions and shape attitudes toward the state. Enjoying some cartoon violence is one thing, ever allowing ourselves to think that it is normal in the real world is quite another.