A Brief History of the Vast Majority of Humanity 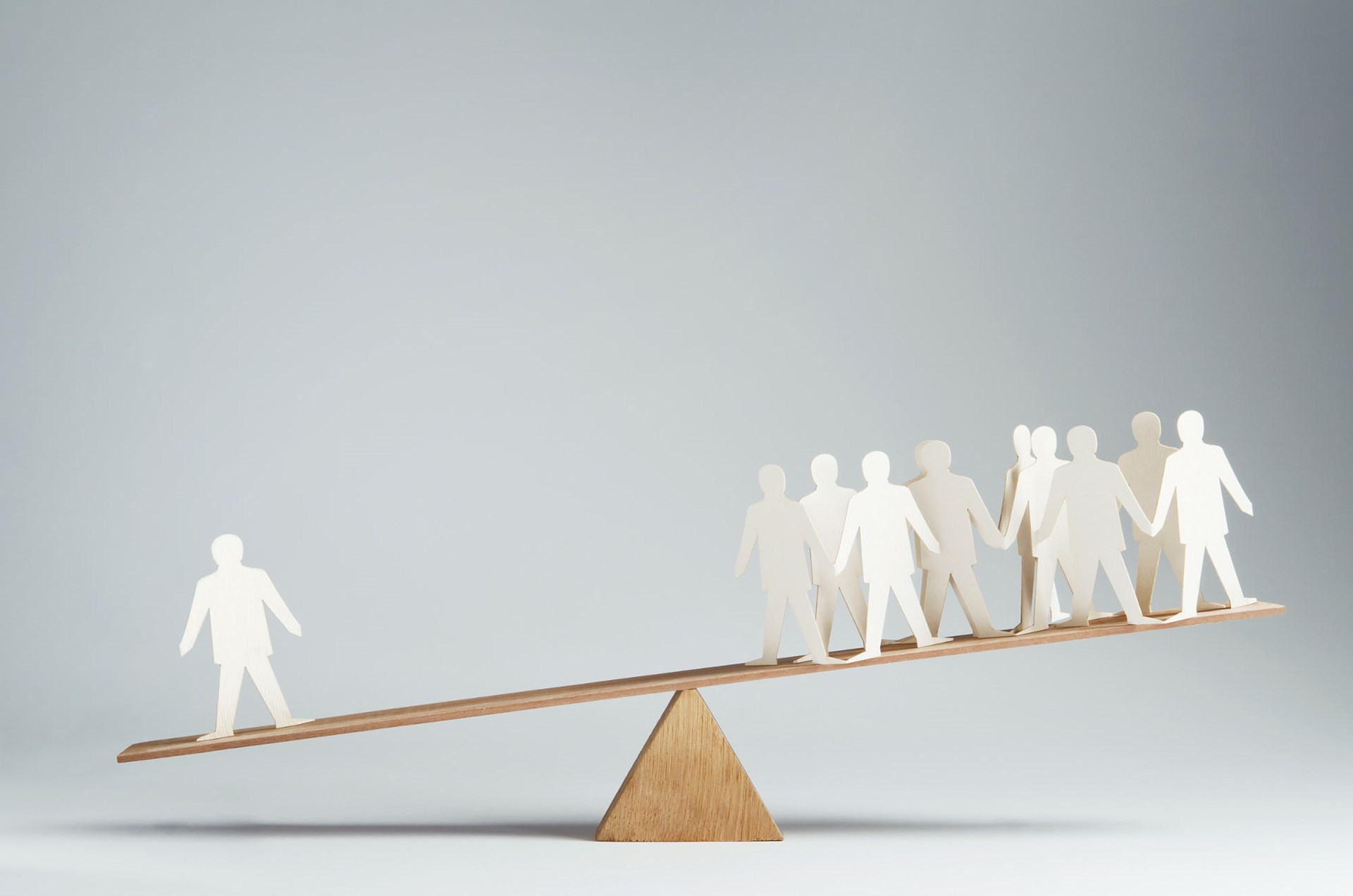 This week’s Gospel lesson is Matt 17:1-9, which is the Transfiguration of Jesus on the mountaintop. There are many lessons to be gleaned from this passage but what has always struck me was Peter’s response. In verse 4 Peter says “‘Lord, it is good for us to be here; if you wish, I will make three dwellings here, one for you, one for Moses, and one for Elijah.’” This is an all too human response. If you have ever had a mountaintop experience you would dearly love to stay there. This is of course not where Jesus wishes to stay nor is it where He wishes us to stay. Our life (and ministry) is in the valleys or today the streets. This got me to thinking; what about those in the valleys and streets? What is life for the great multitude at the bottom. This ought to greatly concern us because Jesus directs His concern (and ours) toward those at the bottom; those on the margins; those who are the oppressed and the disparaged. To that end I offer a brief history of the vast majority of humanity.

Let’s start this history at the time humans first started to farm and settle in some type of community. Prior to that humans were simply hunter-gatherers and were only just beginning to separate themselves from the lower animals. This takes us back to about 5000B.C. The following runs us until about 1750A.D. and holds true for about 80+% of the human population.

So, you are born. Let’s say in a group. Look to your right; look to your left; one of you is not making it to year one. Human infant mortality rates during this period hovered between 25-35% and that about half of all children died before making it to puberty. If you made it out of puberty you could expect to live, on average until about the age of 50.

What would you be doing with yourself during these few decades upon the Earth? You would be a farmer. Not in any sense that we think of farming today but as in mostly a subsistence farmer, making just enough to feed yourself and your family. Some farms during some parts of history produced enough surplus to feed those in urban areas but this was always subject to the vagaries of nature as disease and famine would often cause crops to fail and the cities to empty (not to mention the effects of war).

Most people never traveled more than 20 miles from the small village or tribal encampment they called home, never seeing a city. They never saw a king, fought in a battle, read a book, looked upon any artwork or listened to a teacher lecture. They did see the taxman regular enough though. Taxes mostly in the form of requisitioned crops.

This rather bleak description holds true whether we are talking about ancient Mesopotamia, Egypt, India or China. Consider that all that we study regarding human history; the battles, court intrigues; rise and fall of empires, and on and on is the work of less than 20% of the human population. It remained the case for about 6750 years until, as I said about 1750A.D.

Hmmm, what happened around 1750 to change all of this. Change absolutely arrived around this time as this chart shows:

There was a massive upward thrust in human well-being. This was not just in dollars but in every relevant metric of human progress as this series of charts shows. People moved massively off the farms and their subsistence living and their health and longevity increased as well. Life expectancy went from under 50 years in the mid-18th century to over 70 globally today, as this chart shows: 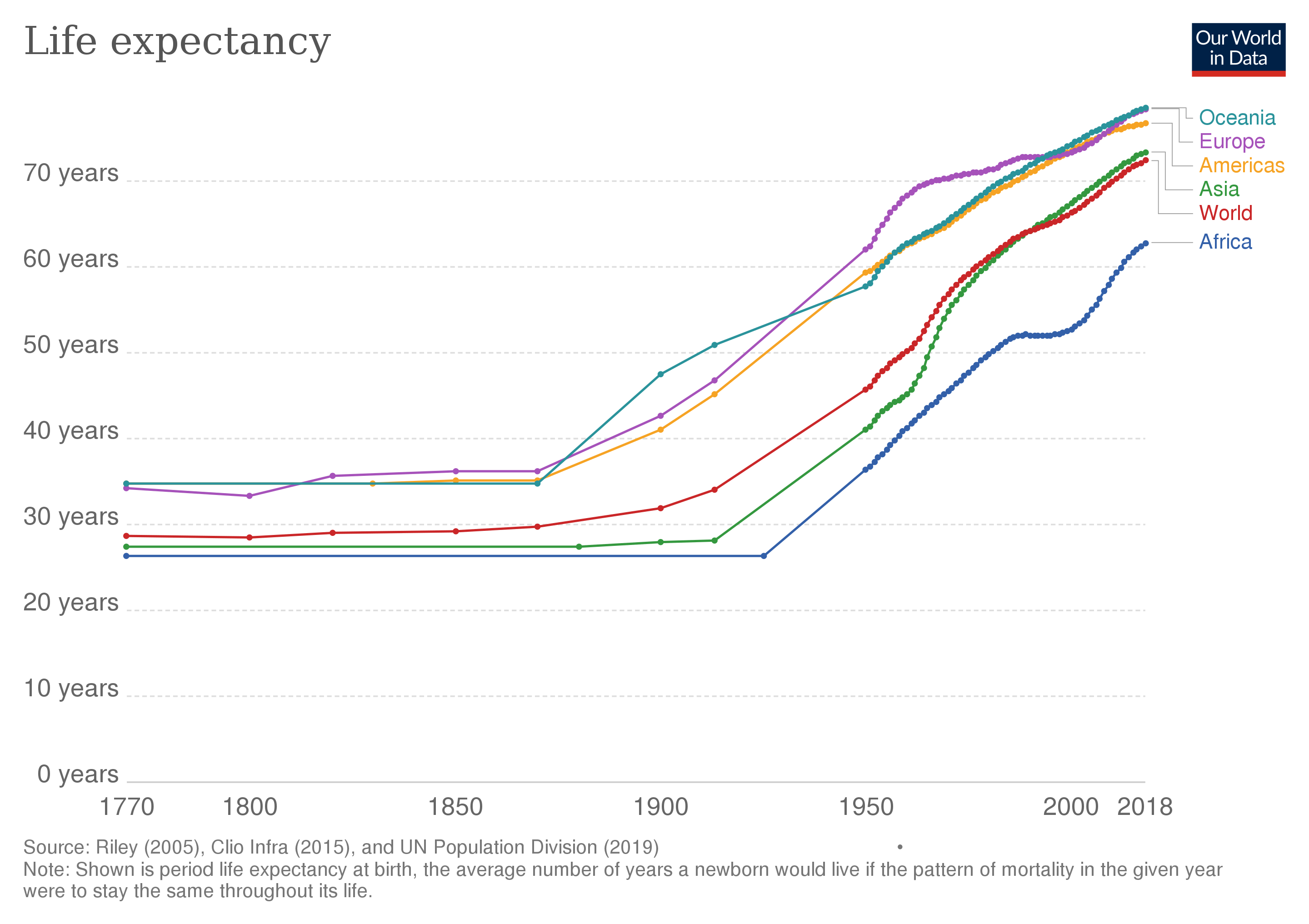 So, what happened? The great battle, as the economist/historian Murray Rothbard has put it is between power (government) and market (voluntary cooperation). For most of human history power has been dominant. We saw brief times when power was diminished and a sort of flowering of humanity occurred; ancient Greece, at times in Rome, ancient Persia (to a degree), China at times, but on the whole it was power than remained dominant and the wars and conflicts in civilization were between one power and another.

However, by the mid 18th. century the idea began to take hold that perhaps people should govern themselves. That they should be allowed to keep the fruits of their labor, that they should not be burdened with excessive taxation and that allowing the free exchange of goods was a beneficial and righteous thing. In short, humanity (particularly the West) began to limit government and reduce its scope. This continued unabated for about 150 years. Since then it has been a back and forth struggle as power has tried to reassert itself since about 1900 (particularly in the West). It was this intellectual change which laid the basis for the Industrial Revolution that lifted humanity from the muck. Even the left acknowledges that this was a period of laissez faire by how much they denounce it. Harder it is to denounce the results.

To be sure this was not an even extension of human liberty (and therefore wealth) as we saw with the treatment of people of color and women as well as indigenous populations. That is a fault of not applying the principles completely, not that the principles themselves are wrong. It was not capitalism that created poverty, poverty was always with us as the norm. When some began to criticize the existence of poverty, it should be evident that they noticed poor people because for the first time in human history there were substantial numbers of people getting noticeably wealthier.

Mass production enriched the masses not the 1%. Cotton was the first massed produced product. This was initially not on the back of slaves in the American South but from the efforts of British workers in textile factories. It was not the rich who bought these cotton products, they continued to purchase handmade silk. It was the new affordability of the mass-produced products and the rising real wages that put better clothing within reach of the masses for the first time…EVER.

For a brief moment in human history we saw people treat one another more along the lines of how God wants us to treat one another. It was uneven and uncompleted but with just a partial movement in this direction and a partial move by the developing world in the latter 20th. century it has lifted millions out of grinding poverty. Think what we could do if we actually extended to all, the principles of freedom.

We can, but only if we turn away from the hate-mongers and the envious who tell us that because there are some who have not benefitted that we should turn back the clock to put power back in full command of our societies. In essence, they are saying that because some have not been made richer, we should make everyone poorer. They of course, ignore that the dislocations of recent years have followed in lock step with the growth of governmental power. They will claim they really want to raise people up but the lack of basic math regarding their proposals and the vitriol with which they sneer at human material achievement should put the lie to this spurious claim. This argument should also fail regarding the historical examples of failed socialist states. The current group of socialists are the most retrograde elements to rise up in society since Marx and are the true knuckle draggers in this debate.

Live and let live, recognize no King but Christ and demand non-violence to all human dealings. These are the hallmarks of a peaceful and prosperous society and not coincidentally the hallmarks of a life lived by Grace. So, while we should joyously accept any mountaintop experience the Lord grants us, remember that our lives are lived off the mountain, and while only God can Transfigure, we can, with enough applied faith, transform this world for the better for the vast majority.